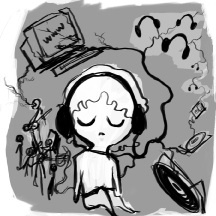 College music services, such as Ruckus, were created in order to provide college students with the services that they wanted to listen to and watch.

Ruckus wanted to offer a legal alternative to piracy for students at all campuses around the nation.

Ruckus allowed students to stream and download an unlimited amount of music and share music with their schoolmates.

However, about two weeks ago, on Feb. 6, Ruckus officially shut down.

Initially, Ruckus started off as a subscription service, in which consumers paid a monthly fee to access the music and videos available on the website.

However, Ruckus changed its policy to partner with more than 200 major universities to provide these colleges with a free and legal alternative to unauthorized file swapping.

In addition, Ruckus began to receive all of its funds not from subscriptions, but from ads, which enabled the site to give free access to students.

Eventually, Ruckus opened all of its facilities to any student with an official university e-mail address (usually ending in “.edu”).

However, faculty, staff, and alumni were still charged $8.95 per month for the service.

Even though Ruckus made a huge effort to inform university administration members about the importance of legal music streaming, not enough university students took advantage of Ruckus’s services.

A Ruckus official explained that the company has officially played its last song.

He explained that although the audience was fairly good, the money coming in from ads was slowly decreasing.

Some students who tested out Ruckus’s service complained that Ruckus was not completely useful to them because the music tracks were DRMed WMP files, which meant that the songs were not iPod or Zune-friendly.

The students didn’t like that they couldn’t download music to listen to wherever and whenever they wanted to.

They were restricted to listening to the music they liked at only their PCs, because Ruckus was also not available on Apple computers.

Other students who tested Ruckus out for one year liked Ruckus’s other available social networking features, such as shared playlists, message boards, and song recommendations between peers.

One student also liked the fact that the Ruckus service had a great music library that was easy to use and readily available.

However, despite Ruckus’s pitch that the songs were completely free, many students did not like the fact that the music lacked usability.

Even free music, students felt, is no use when they can’t listen to it wherever, however, and on whatever music device they want.

Sophomore English and creative writing major Chloe Perkins said that she would also “be less inclined to use a service like Ruckus” if she couldn’t put the songs onto her iPod, because she listens to music most while she’s on the go rather than when she’s sitting at her computer.

First-year H&SS student Joyce Chung said that she would prefer sites like YouTube over Ruckus because Ruckus is shared among college students, while YouTube is “easily accessible, includes a wealth of information, and many more people around the globe use it.”

Chung also attributed to Ruckus’s downfall to a “lack of promotion, marketing, and publicity.”

She felt that sites like YouTube or iTunes offer many more unique services, applications, and features that she is satisfied with.

On the other hand, first-year professional writing major Hannah Post stated that she thinks “college music services are effective, because file sharing within a campus community gives students a widespread collection of music and features.”

Post also said that she would prefer campus file-sharing over sites like YouTube or iTunes, because on iTunes, you have to purchase your music, whereas on a college music program, the service is free, and because she feels as though you can have more control of your music on a college music service than on YouTube, where you can only watch videos.

The sudden shutdown of Ruckus reminded some officials of two years ago, when another college music service, Cdigix, also abruptly announced the end of its music services.

Cdigix was a company that initially offered an online music service for colleges, but after that ended, it re-geared itself and became focused on selling a service to colleges to place movies and music on reserve online.

However, Cdigix cited that it had a lack of clients and an inability to raise enough money to continue operating, even with its movies and music reserves system. At this point, after one too many music service failures, officials are beginning to think that the whole business model for campus music services isn’t working, and they want to create something totally different.

Perkins thought that maybe Congress could invest in some specific companies to make a file-sharing system, or if that didn’t work, then maybe they could provide money to the companies to provide rebates to students who bought and shared music on a file-sharing website.

Despite the music industry’s failure to create an efficient, popular, and legal alternative to file swapping, the music industry did succeed in something else: persuading Congress that colleges needed to control the amount of music piracy on their campuses.

According to an article in The Chronicle of Higher Education, Congress renewed a new provision in the Higher Education Act last year, which requires colleges to offer alternatives to illegal downloading.

However, the meaning of this vague requirement is still unclear, and the U.S. Department of Education is just beginning to draft specific regulations about what this provision means.