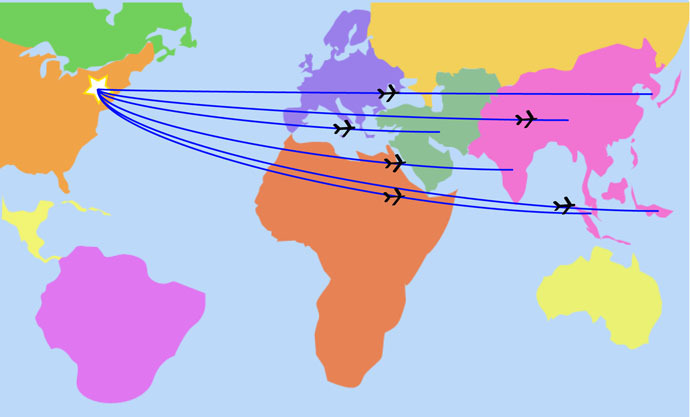 International students at Carnegie Mellon are taking their degrees back to their countries rather than remaining in the United States. (credit: Amanda Cole/Editor-in-Chief and Frances Soong/Art Staff)

Increasingly, international students at Carnegie Mellon who are finishing degrees in science, technology, engineering, and math (STEM) are choosing to pursue career opportunities outside of the United States after graduation.

Some students feel that this trend of homeward migration is in part a consequence of the general economic recession in the United States. “The crisis on Wall Street is making it difficult for any college student in the U.S. to get internships or jobs,” commented first-year engineering major Karen Yu. “If they [international students] can find better opportunities in their home countries ... there is not much incentive to stay here.” The crisis has affected all potential employees looking for jobs, not just college students.

In addition, many multi-national companies and organizations, such as Microsoft and Samsung, are expanding overseas and creating career opportunities outside of the United States. Yu explained, “Globalization and technological advances are removing geographic barriers, so job-seekers in general are going to spread out.” First-year computer science major Anuraag Jain, who is from India, also added, “I would like to find something (an internship or job during the summer) in California, but ... I’ll probably be able to still work for Microsoft or Apple if I go back to India.”

However, regardless of current events or globalization in the United States, many international students are simply obliged to return to their home countries after graduation. “Our government has awarded many Singaporean students scholarships on certain conditions,” explained first-year computer science major Jun Jie Liang. “After I graduate from Carnegie Mellon, I need to spend several years working in Singapore before I can find a job in the U.S.” The economies in emerging nations like Singapore are increasingly in demand for engineers and information specialists to compete in a more technological global economy. To encourage their youth to pursue careers in these fields, the governments of these nations are awarding full scholarships that characteristically allow local students to pursue degrees in STEM fields at many top universities in the United States or Europe. “Most scholarships require a bond of four or more years of work after graduation,” explained first-year computer science major Joseph Lum. “Our government is making an investment in us to apply what we have learned to stimulate our country’s economy.”

“In secondary school, several of the required courses were about computer and information technology studies,” confirmed Jain.

The American Society for Engineering Education did note, however, that these gaps are in part due to a deliberate shift of focus to “soft” areas and liberal arts among many colleges and universities in the United States.

Nevertheless, many experts interpret trends of homeward migration and inferior STEM education as signs of the United States’ decline as a global superpower. STEM graduates play an increasingly vital role in the emerging technological economy.