Steelers paint the town black and gold; Steelers win one for the other thumb 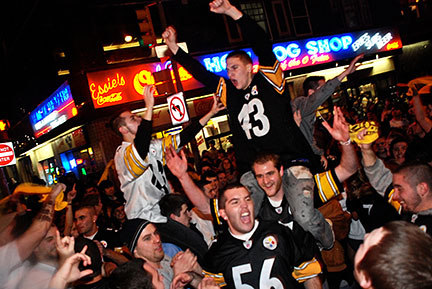 Citizens and college students in Pittsburgh riot in the streets after the Steelers win their sixth Super Bowl. (credit: J.W. Ramp/Publisher) 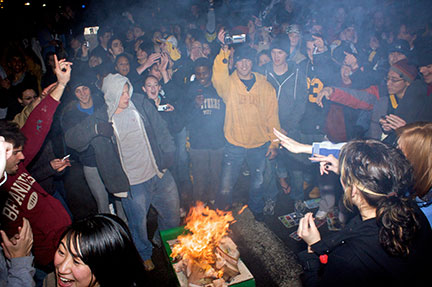 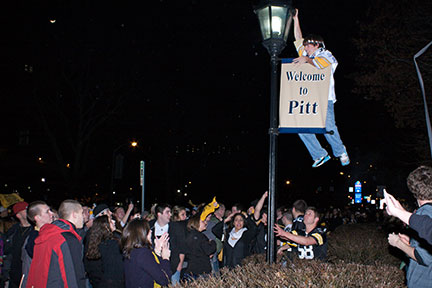 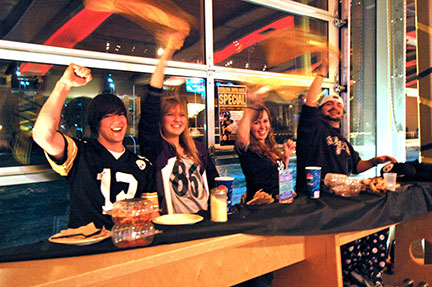 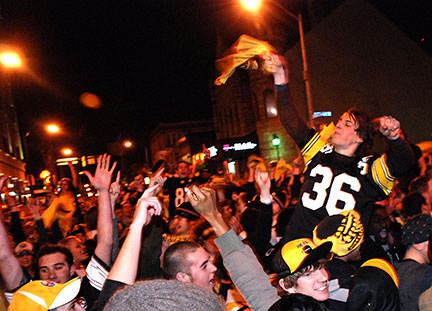 The Steelers played through a tough schedule in the regular season to gain the number-two seed in the AFC playoffs. After winning two consecutive playoff games at home at Heinz Field against the San Diego Chargers and division-rival Baltimore Ravens, the Steelers earned their seventh trip to the Super Bowl.

Sunday’s opponent, the Arizona Cardinals, has endured two changes in scenery as they moved from Chicago to St. Louis to Arizona. Upon arriving in the West in 1988, the Cardinals enjoyed only two winning seasons in the desert of Glendale, Ariz.

Representing the weak NFC West division, the Cardinals amassed three playoff victories, including a road victory against the Carolina Panthers that came between two playoff home victories against the Atlanta Falcons and the Philadelphia Eagles.

Amid the countless flashes and frenzied fanfare, the Cardinals won the coin toss and deferred the first possession to the Steelers. The Steelers went to work right away as they scored on their first two possessions to go up 10–0, kicker Jeff Reed and running back Gary Russell scoring a field goal and a touchdown, respectively.

The Cardinals answered right away with a touchdown of their own when Kurt Warner threw his first touchdown pass to his tight end Ben Patrick from the 1-yard line.

The turning point in the game occurred during the final play of the first half. The Cardinals had the perfect opportunity to equalize the score, as they drove all the way to the 1-yard line. However, Steelers linebacker, James Harrison, NFL Defensive Player of Year, stepped in front of wide receiver Anquan Boldin to intercept Warner’s pass on the goal line. With no time left on the clock, Harrison returned the ball 100 yards to extend the Pittsburgh lead to 17–7.

After halftime, the Steelers stifled the Cardinals offense yet again as Arizona gave up the ball to the Steelers. With a combination of short pass and running plays, the Steelers were able to take eight and a half minutes off the third-quarter clock to come away with only a field goal by Reed.

Two scoreless drives ensued; the Cardinals regained possession of the football; and the Cardinals’ offense took advantage of this opportunity. With a quick series of no-huddle plays, the Cardinals were able to get a quick touchdown as Warner completed eight consecutive passes, including a touchdown jump-pass to standout wide receiver Larry Fitzgerald in the back corner of the end zone to decrease the deficit to 20–14.

Another two scoreless drives occurred, and the Steelers were pinned inside the 1-yard line. Quarterback Ben Roethlisberger was able to execute a brilliant pass to wide receiver Santonio Holmes, but the play turned into a safety as a Steelers lineman was called for holding in the end zone.

The drive was highlighted by an athletic and acrobatic catch by Holmes on the side of the end zone. He was able to keep both feet in bounds as he helped his team win their sixth ring as a franchise. The 27–23 final score sent Steelers fans rioting throughout the Pittsburgh streets.