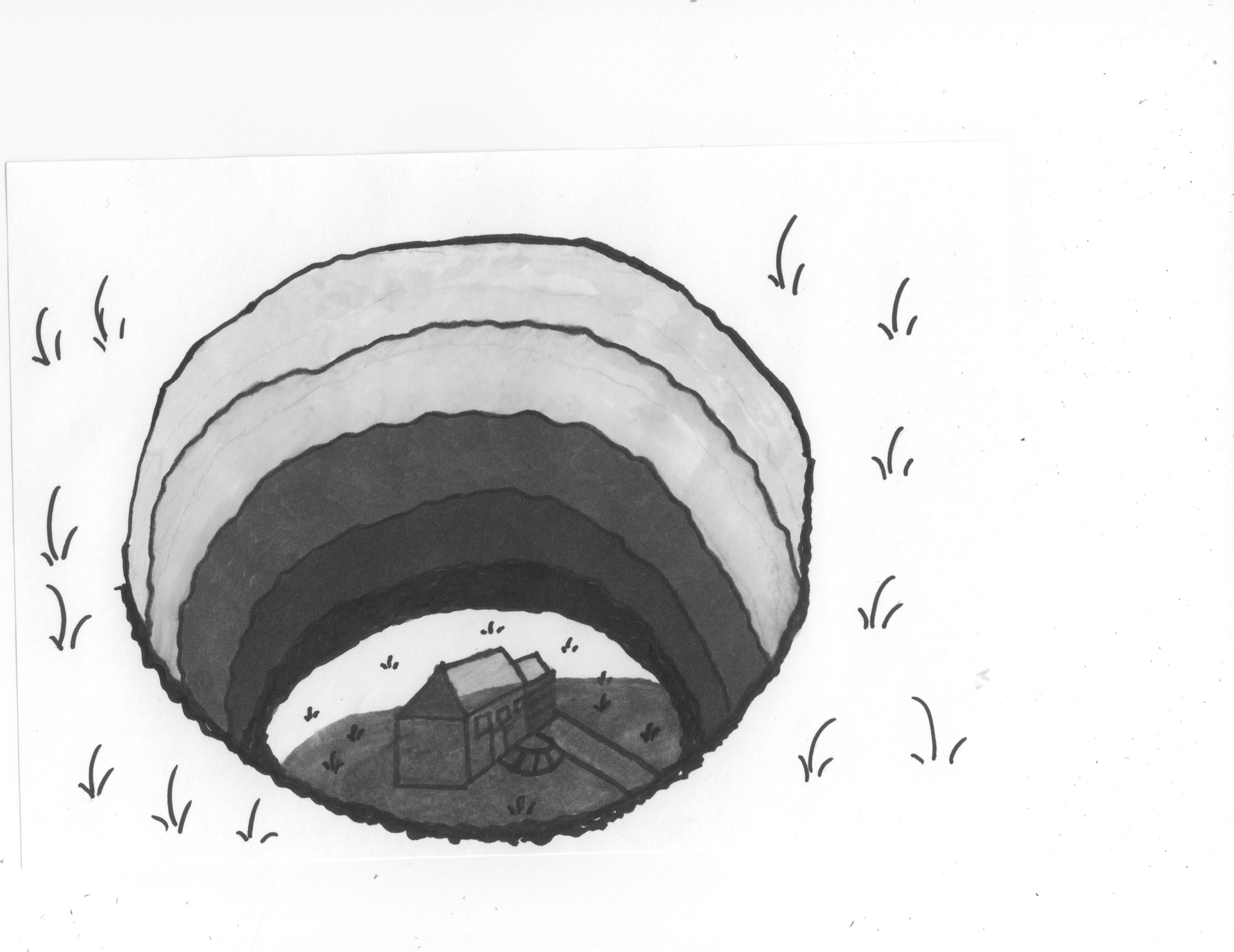 Imagine a house standing peacefully in a locale where nothing extraordinary seems to happen, and the next minute the house is lying in ruins in a deep hole 200 feet in the earth.

This type of natural occurrence is called a sinkhole, which swallows everything above it and leaves behind a gaping hole in the earth. Sinkholes are caused when the soil underneath the surface is hollowed out, leaving no support for the above-ground structures. There are three layers of substance that support a structure like a house.

There is the topmost layer of soil, ranging anywhere from a couple feet to hundreds of feet thick, followed by a solid layer of rock, usually composed of evaporite or carbonate types of rock. Evaporite rock is formed after minerals from above-ground water precipitate and collect below, and carbonate rock is formed mostly of minerals containing the carbonate group. The most common examples of such rocks are limestone and dolomite.

These types of rock are the most prone to dissolve with constant water contact. Over time, if there is water flow over the rock layer due to groundwater pumping or activities caused by ponds or basins, erosion will occur, forming a hollow void in the rock layer.

The soil from the topmost layer travels into the caverns formed in the rock layer below, leaving a void in the soil layer above. Eventually, enough soil will travel into the void, so there is a hollow arch in the soil layer. When the soil support wears too thin, the surface above will collapse into the hollow space where the soil previously was, and a sinkhole is formed.
Sinkholes are often undetectable and are formed suddenly since the soil on the topmost layer stays intact as long as it has support from the rock below it, but as soon as it loses this support, the soil collapses. According to the Department of Environmental Protection of Pennsylvania, other causes for sinkholes include soil removal, drilling, vibration from traffic, or concentrated water flow, such as stormwater drains or leaky sewage pipes. Thus, human activity could be responsible for forming sinkholes.

However, the most effective way of triggering a sinkhole is by pumping materials underground. Any disturbance of either the underground water or soil can place stresses on parts of partially developed sinkholes. Any change in the hydraulic system, a change in the amount of water underneath the ground or change in soil, could possibly induce a sinkhole. The water and soil support each other and thus keep the surface stable, but a change in that equilibrium will cause a change in the ground below.

A more mild form of this natural disaster is called dissolution, where instead of the ground collapsing, a slight depression in the ground is formed to create a pond or other water collection site.
Common signs of sinkholes include cracks in the ceiling or walls, windows or buildings, the inability to properly close a door or window because of misalignment, or cracks or depressions in the ground. According to ga.water.usgs.gov, the most common states where sinkholes occur are Florida, Texas, Alabama, Missouri, Kentucky, Tennessee, and Pennsylvania. However, out of all these states, the most sinkhole-susceptible state is Florida.

Much of its peninsula is composed of sand and clay deposits, so water erosion of the rock underneath is higher in Florida than in any other state. One of the biggest, natural sinkholes recorded is the Qattara Depression near Cairo, Egypt. This desert sinkhole is 75 miles long, 50 miles wide, 436 feet deep, and composed of nearly all quicksand.

Currently, scientists want to fill the sinkhole completely with water to create a body of water that would, according to webecoist.com, rival Lake Erie and would give the Qattara region complete energy independence. A sinkhole with a semi-happy ending is The Devil’s Sinkhole, where after it opened under a street in Texas, people found ancient Native American artifacts and trinkets.
Another unusual example of this natural disaster is the Berezniki sinkhole in Russia, which is 656 feet deep and grows deeper every year. The Sarisarinama sinkholes in Venezuela are nearly 1000 feet wide and deep and are perfect circles. What is unique about them is that they contain numerous ecosystems that are found only inside the sinkholes.
Another interesting type of sinkhole is called a “Cenote.” Cenotes are sinkholes filled with water that are connected to a number of underwater tunnels and caves. Cenotes thus form beautiful spots for swimming and have become great tourist attractions. The Bimmah cenote in Oman and the Mount Gambier cenote in Australia have become particularly famous as tourist spots.