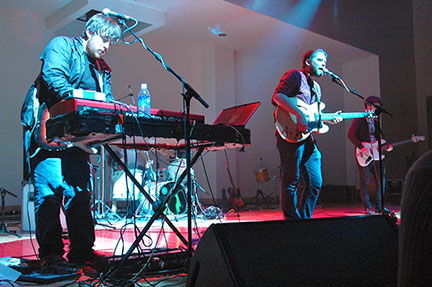 The atmosphere at Frightened Rabbit’s Jan. 26 performance wasn’t exactly like that of their sold-out Chicago show two nights before, but the 250 or so bodies who showed up at Carnegie Mellon University’s campus to show their support for the hairy Scots of indie rock were undoubtedly excited about this relatively new phenomenon in the music world.

Hailing from Glasgow, the band started off with just the lead singer Scott Hutchison and his guitar in 2003. Hutchison’s brother, Grant, joined him on the drums a year later, while Billy Kennedy joined six months after that, bringing bass, a keyboard, and a second guitar to the then line-up. It was only after the band recorded their second album that Andy Monaghan joined them in 2008.

Stepping onto the stage that night, Scott announced in his quiet but resonant Scottish accent, “Hi. We’re Frightened Rabbit, and we’re from Scotland.” They opened with the first track from their new album, “The Modern Leper,” which seemed like a particularly good choice, as the audience responded positively by singing along and clapping occasionally.

The entire performance was phenomenal to say the least, and the band’s second album, which is decidedly better than the first, has catapulted them to success all over the country and still hasn’t been able to do them justice. You can see the real, honest pain in every drop of sweat shed from Scott’s forehead with every self-aware, heart-felt lyric. Perhaps the line that best sums up the album, and indeed the concerts from this tour, is “vital parts fall from his system/And dissolve in Scottish soil.” Scott boldly stands on stage and sings this lyric about his falling apart over an ex-love from the bottom of his stomach, with an unmistakable sound of raw Glasgow heartache.

A highlight of the performance was “Good Arms vs. Bad Arms,” which began with an almost haunting air, as the Scottish folk sounds bounced around the large hall. Another was “Square 9,” from their first album, which Scott dedicated to the album itself. The best, however, was “Poke” — for which, as the first song of the encore, Scott came on stage to sing with nothing but an acoustic guitar. Standing at the very front of the stage, basically naked without his microphone or amplifier, he gave an astoundingly passionate and beautiful acoustic performance to the deafeningly silent hall. The entire room was captivated.

After the show, I went backstage to chat with the guys about their new album, the American and Scottish tours, and what their preferred choice of nightwear is.

The Tartan: How is the tour going so far, and how do you find the American crowd compared to the Scottish crowd?
Scott Hutchison: They’re quite similar, actually. Glasgow, because more people have heard of us than in the rest of the UK, Glasgow seems to work, but the rest of Britain doesn’t really work out for us a lot of the time.
T: Really?
SH: Yeah, I dunno why. But over here it seems to be quite consistently enthusiastic.
Grant Hutchison: Not as consistently mental as Glasgow audiences. I mean, there’s nowhere else like that.
SH: But New York City is almost like a home crowd sometimes — we’ve played there quite a lot.
GH: And Chicago as well.
SH: So yeah, it’s been wonderful! The American audience really seems to get it, I guess.

T:[to Scott] All your lyrics, and especially, it would seem, on the second album, are really personal. Did you ever feel quite nervous about letting people hear it?
SH: Nah. We didn’t really have an audience at that time, so I really wasn’t aware. When you write the song, you’re in your bedroom alone, and then when you record it, it’s just you, the band, and whoever’s recording it. You’re not aware of it being released and lots of people hearing it, so that makes it easier to make it more personal. I don’t regret it either. I think honesty is something other people respond to, and I think it’s one of the things people like about us.

T: Pajamas, boxers, or nude?
SH: I love pajamas. But not in the summer.
GH: I’ve never worn any pajamas. I’d like to though! I usually go for boxers.
SH: You feel like a 12-year-old in pajamas. It’s great!