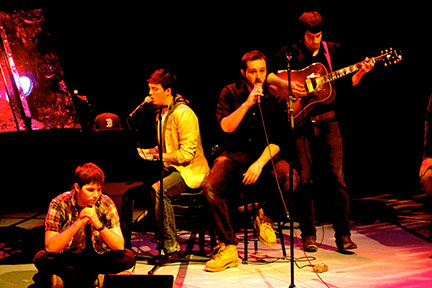 Pictured is a scene from Sophomore Boys Unplugged, which featured music played by eight sophomores. The played both popular and not-so-popular songs at Chosky Theater. (credit: Paul Menlibai | Photo Staff)

This year’s “Playground: A Festival of Independent Student Work” kicked off with a spectacular light show, complete with thundering sound effects and a Skype video conference with Dick Block, associate head of the School of Drama and one of the creators of the Playground program.

Thursday night marked the sixth year of this annual festival, and drama students were overjoyed to relish in all of their hard work.

Many performers from last year returned with new editions of their pieces, such as Nick Ducassi, a junior musical theater major. He performed his one-man show, (XY)Z: X-amine Your Zipper, which explored the definition of a man and his role in social society. Opening with words from the popular Bob Dylan song “Blowin’ in the Wind,” Ducassi discussed situations involving men, sex, love, homosexuality, family, childhood, and the question of manhood.

In the intimate setting of the Rauh Studio Theater, Ducassi switched between the roles of narrator and “monster,” which could have been interpreted as a troubled man’s subconscious thoughts. Oretha Manu, a sophomore global environmental public policy self-major, was really moved by Ducassi’s piece. “I really enjoyed Nick’s piece because he really tried to reach every view of what a man goes through, or what a man can be. He covered the stereotypes, and he went beyond them,” she said. At the end of his performance, Ducassi received a standing ovation from the majority of the audience.

Another highly praised performance was directed by Gabrielle McClinton, a sophomore musical theater major, who brought Twilight: Los Angeles, 1992 to the Chosky Theater. Written by Anna Deveare Smith, Pulitzer Prize and two-time Tony award nominee, the documentary theater piece portrays reactions to the Los Angeles riots of 1992. The four policemen arrested for beating Rodney King were found not guilty, and testimonies from a lawyer, an anonymous jury member, a civil rights activist, a real estate agent, and others, were performed by an all-female cast.

The show featured a parody of the Twilight book series with three teenage girls fawning over “Mist,” the perfect guy, meaning he was a vampire. After one girl has been drained of her blood, the other two eagerly await their turn. Mist looked quizzically at the teen girls and explained that it’s not “wonderful” to be bitten by a vampire. He grabs a girl’s wrist, starts biting into it, and as she screams he says, “See? It hurts!” only to have the girl respond, “Do it again.”

Other spoofs included The Private Lives of Bible Characters, and a skit with the killer from No Country for Old Men as a birthday party entertainer.

“That was the funniest thing I’d seen all day,” said Wilder.

The Playground performances truly appealed to a wide range of people. With thought-provoking, confusing, comedic, and musical pieces, there was something for everyone.

Perhaps most indicative of Playground’s appeal to students, regardless of their major, was the performance of Dr. Horrible’s Sing-Along Blog on Friday.

Students from majors as far removed from drama as computer science, engineering, and physics poured into the Chosky Theater, filling nearly all of the seats available. A molecule was projected onto the curtain as audience members discussed excitedly what the show might be like, or how they hoped the actors might carry out their roles.

Then again, therein lies the beauty of the show. Dr. Horrible’s Sing-Along Blog has gained something of a near cult-like status among its fans since it debuted on the Internet scene over the summer. People sing and hum songs from its score to class, grinning as they do, and watch the movie online or on DVD.

However, part of what makes Dr. Horrible such a unique production is that it is a musical, as implied from its title. It boasts of having the most well-known song about freeze rays on Earth, or perhaps in the history of musical theater, as well as engaging characters and a plot that viewers can’t help but get sucked into.

When the theme music played, a cheer swept through the audience. People waited in their seats, leaning forward in anticipation as the curtain rose and the production began. Dr. Horrible himself came out, clad in plain clothes and wearing a Carnegie Mellon T-shirt. “I have a Ph.D. in horribleness!” he said, gesturing to the school’s logo, as the audience couldn’t help but laugh and applaud madly.

On the whole, the staging was superb. While doing scenes from a blog might seem easy to adapt to stage, Dr. Horrible presented some interesting challenges that the cast and crew handled very well. For example, at one point it was necessary to change scenes from a laundromat to the doctor’s lair. Thanks to some nifty backgrounds and the help of supporting characters, scene changes were not only smooth, but also fun for the audience to watch. During one of the musical numbers, a band of homeless people ran off with the table that, moments before, Captain Hammer and Penny had been using to dine at. The audience loved it, rolling with laughter as the play moved seamlessly on.

The cast and crew also accurately predicted how the audience would react. While they wanted people to be quiet for most of the songs in the show, there were times when the audience was invited and encouraged to break into song. At one point, a row of people started to do the wave, and soon enough, all of the audience was following.

The production’s success, on so many fronts, was an example that hard work, attention to detail, and knowing one’s audience pay off. By the end, the audience was up in arms, clapping and applauding, some even calling out, “Commentary!” in hopes that the cast would return for an encore performance.“It was excellent,” commented Matthew Doncheski, a sophomore mechanical engineering major. “The guy who was playing Captain Hammer really nailed it.”

Sure enough, long after the production was over, people were still talking about it, comparing how each character was portrayed, and how similar to the actual movie it was. Some of the actors were excellent, including the one lovingly referred to as “Raunchy Penny,” while others needed to watch the original a few times more.

Playground continued, going into a three-person play about a troubled marriage called Minor Variances. With minimal props and a cast that was extremely absorbed in their roles, the play was enticing, leaving the audience wondering about what was truth and what was fiction.

The performances of Friday night were also held in high esteem.

The last day of Playground included a few unconventional pieces. Tina Robinson’s Anomalous Voice explored the consequences of technology determining who deserves government aid. Six different people were asked to sit in the True Voice Indicator (TVI). The TVI would analyze the person’s voice and thereby determine the race and socioeconomic status of the person, and report the amount of government aid he or she would receive. This piece was mentally stimulating, combining themes of race relations, the challenges of differing socioeconomic classes, and stereotypes.

At 5:05 p.m. performers of Hearing is the Last to Go... asked the audience members to lie down on mats that had been spread out on the stage floor. Participants were blindfolded, and bombarded with a multitude of orchestrated sounds and words, such as names of colors, and dialogue. Every now and then a narrator’s voice could be heard, but the narration was not always coherent or rational. Occasionally, actors would shine lights on the blindfolded eyes of participants and run around their bodies, creating chaos.

Basically Bourdoir featured musical selections related to bedroom and night-time activities. One singer announced the show as “the opening act for Under the Covers,” which was the final show of Playground.

School of Drama students crowded the front rows as the concert was coming to an end.

Playground has proven itself to be not only a showcase for a myriad of student talent, but also a vehicle for bringing students from different backgrounds and majors together to enjoy good plays and great acting.