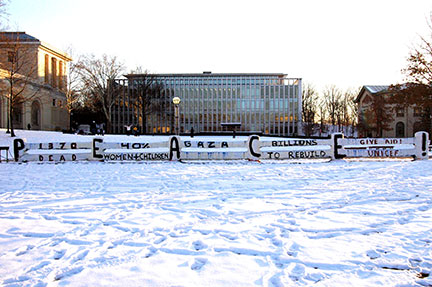 Students from the Muslim Student Association painted the fence Wednesday night with a message for peace. (credit: Kristen Severson/Photo Editor)

In thick red letters atop a coat of white house paint, the message “P-E-A-C-E: 1370 Dead, 40% Women + Children, Gaza, Billions to Rebuild, Give Aid!, UNICEF,” was spelled out across the six paint-laden posts of the Fence in the middle of the Cut. Six students from the Muslim Student Association (MSA) painted the fence overnight to demonstrate their support for the people of Gaza.

MSA is an on-campus organization whose mission is to foster awareness on campus about Islam, eliminate cultural misconceptions, and unite Muslim and non-Muslim individuals, according to the group’s website, www.andrew.cmu.edu/user/msa.

“A number of our members and board members had mentioned that they would like to do something to help raise awareness and aid for the humanitarian crisis in Gaza,” said Nader Shakir, a member of MSA’s executive board and a fifth-year senior in SHS.

“So much damage was done to civilian populations [especially women and children] as well as non-military infrastructures [including schools, hospitals, water, electricity], that many of our members felt moved to do something,” added Sarah Aboutalib, a doctoral student in computer science and president of MSA. “Especially since where much of the rest of the world seem concerned with the humanitarian crisis, we [people in the U.S.] seem to be taking it lightly or are unaware of it all together.”

According to the MSA, its goal of raising awareness of the need for peace in Gaza and aid for UNICEF for the civilian victims of the war was mostly met with success.

“We did receive some donations for UNICEF during the tabling, and the simple fact that so many individuals have approached our members with regards to the Fence-painting shows that at least some have taken notice of the issue,” Shakir said.

Carnegie Mellon has students with origins in the cultures of the Middle Eastern region who, while physically dissociated from the fighting in Gaza, feel ties to those in closer proximity.

“Regardless of one’s opinion in terms of the political issues, we should all be trying to help give aid to those who are innocent casualties of the conflict,” Aboutalib added. “We at Carnegie Mellon pride ourselves in being aware and involved in current events. As a result, we have a responsibility to help the situation as much as we can.”

The pro-Gaza message on the part of the MSA, however short-lived, shed light on the issue of Palestinian and Jewish student relations on campus. “I think [the conflict in Gaza] is heart-wrenching for everybody to see,” said Aaron Weil, executive director of Hillel, the Jewish University Center of Pittsburgh located near the intersection of Forbes Avenue and Craig Street.

“Jewish students are also interested in getting the word out,” Weil added.

“Palestinian sympathetics — which includes many Jewish students — are rightfully outraged at the suffering” in Gaza.

Students from the MSA said that they did not necessarily expect a strong, campus-wide reaction to their message but rather saw the Fence as an opportunity to promote peace and raise awareness of the conflict that is affecting Palestinians in Gaza and worldwide.

“While I was tabling in the UC to collect donations for UNICEF, one student had mentioned that her friend was a little upset because she didn’t think the Fence should be used for political messages,” Aboutalib explained, adding that the MSA did not intend for the message to be political, and recognizing that openly acknowledging the situation in Gaza can be sensitive for students on either side of the conflict. “This has made it somewhat hard to come up with events that can bring awareness to the problems while being careful not to offend either side,” she added.

The Fence was quickly repainted by Friday morning. Students from the MSA explained, though, that this repainting was not purposeful or particularly directed toward them or the conflict in Gaza; the inclement weather and freezing temperatures made it difficult to guard the Fence once the MSA had already successfully conveyed their message to the snow-covered campus community.

“It was kind of sad to see all our hard work erased so quickly, especially since we felt it was such an important message,” Aboutalib said.

While the fighting between Israel and Gaza has slowed, the cultural significance of the conflict continues to be relevant to different religious, cultural, and political groups on campus, such as the MSA.

In terms of how the conflict in Gaza will continue to affect students on campus, Aboutalib said, “I think we first need to educate ourselves about the conflict from both sides and its effect on all levels, going down to the individual people being affected.”