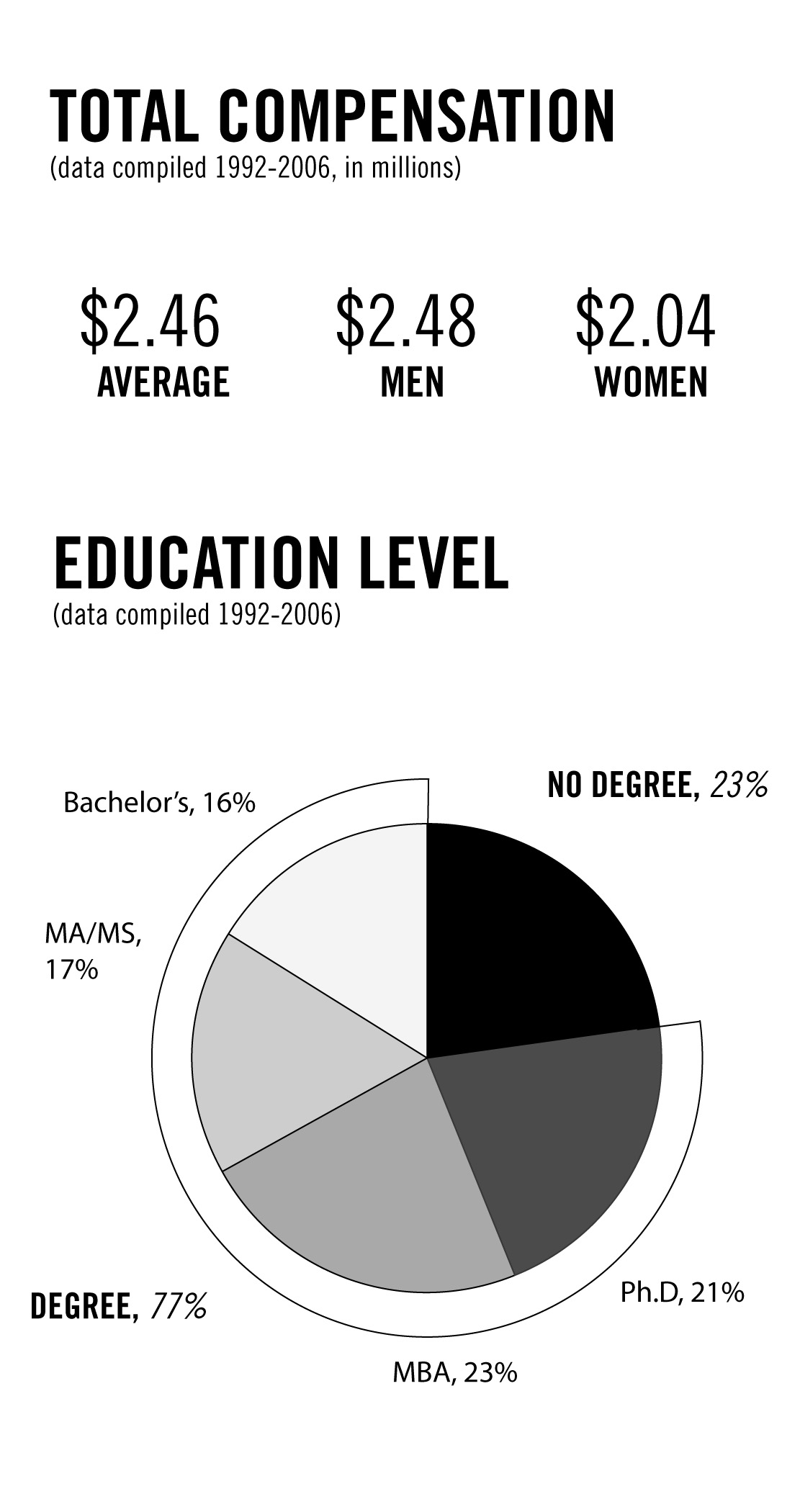 The infographic above illustrates statistics in reference to the salaries and compensations of executives. (credit: Andrew Peters/Contributing Editor)

A recent study conducted by the Tepper School of Business was designed to analyze the life-cycle changes that employees undergo as they make their way up the corporate ladder.

Although the study was designed to look at executives from all different types of backgrounds and experience levels, some of the most surprising results came when comparing salaries and compensations of female executives to their male counterparts.

In a world where people sometimes assume that males have a significant salary advantage over females, women were actually observed to earn more than men in some situations.

The data set used comprised 16,300 managers who were included in the Standard and Poor’s ExecuComp database between 1992 and 2006.

Only about 5 percent of this sample was female, although it was found that women tended to congregate in the lower executive ranks more than men.

Although the study found that the educational background on average was practically identical for both genders, it did note that “females are on average three years younger than males, have three and a half years less executive experience, and two years less tenure on their current job.”

According to Robert Miller, a professor of economics and strategy at Tepper and a co-author of the study, this observation was just one of many which supported the finding that “women are leaving their positions more than males,” often because of outside obligations, a negative climate within the workplace, or specific desires like starting a family.

This gap in experience was found to hurt female executives considerably in terms of salaries and compensation.

On average, the study found that the average female compensation is about $440,000 less than that of males, a significant decrease from the admittedly considerable average compensation of $2,460,000 for the surveyed executives.

These results suggest that because of less executive experience, women are not monetarily rewarded as much as men.

The difference in pay, however, may vary depending on the field under consideration, as shown by the 2007 Society of Women Engineers (SWE) literature review.

The review commented that, “interestingly, in such high-demand fields as engineering and computer science, these [pay] gaps are often much smaller than in fields in which there is a larger supply of workers, even in other STEM [science, technology, engineering, and math] fields.”

The publication also states that, in some ethnic groups, including Latinas,
African-Americans, and American Indian or Alaskan natives, women engineers actually earn slightly more than men.

It continues by stating that “non-Hispanic white women on average earned a little less than their male counterparts while Asian/Pacific Islander women and men had the same average salaries.”

The survey performed by Miller and his colleagues found similar results when comparing a male and a female executive of the same age, educational background, and job experience.

They even noted that, on average, the female executive was observed to earn $100,000 more than her male counterpart.

This result, Miller stated, could not be explained by any specific factor within the study, but was perhaps an indicator of some “unmeasured ability” that gave women executives a slight edge or showed that companies were trying to enhance gender diversity within their higher- ranked positions by providing this extra incentive for women.

Regardless of the reasons behind this result, the study did show that, at least among executive positions, females tended to fare just as well as, if not better than, males in terms of compensation and promotion. The major limiting factor proved not to be the educational background of the individual, but the tendency of females to leave their positions sooner than males.

Despite this, continued efforts to improve situations for women and minorities in the workforce have opened doors for many individuals.

As Krystina Teoh, a sophomore mechanical engineering major, put it, “If I had lived even a generation ago, I would not have had access to the same opportunities which are available to me now.”