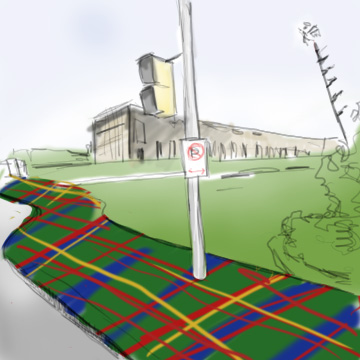 Though it’s currently covered in a layer of slush, the walk across Forbes Avenue just might be getting a little more fun in the coming months.

The crosswalk redesign is part of a larger design package introduced by Itkowitz and his staff that will include the addition of perimeter flags on Forbes Ave. bearing Carnegie Mellon’s name. The plan may evolve to include other design improvements.

Larcom, who thought up the idea for the plaid crosswalks, realizes that the proposal will be a tough sell and may take months to come to fruition.

“It’s quite a process. I think it’s great and I think there is support for it, but we need to assess the costs before going forward,” Larcom said, adding that similar plans have already been enacted at other universities, including the University of Wisconsin and the University of Alabama.

Larcom and Itkowitz indicated that the plan will have to withstand review by numerous committees, offices, and agencies, including Carnegie Mellon’s Design Review Committee, Pittsburgh’s Department of City Planning, and the Pennsylvania Department of Transportation (PennDOT).

The Student Body executives have been working with Jen Layman, Carnegie Mellon’s Assistant Director of Government Relations, to navigate the winding path through city and state government.

Though the plaid may only take 24 hours to put down, Layman estimates that it may be a few months before the student leaders will even know if the plan is viable.

This is not the first time Larcom has tackled the issue of campus signage. As an underclassman, Larcom met with success in getting bathroom signs installed in Doherty and Wean Halls. This time, she has set her sights at the university level.

“You should know when you are [at] Forbes and Morewood that you are at the entrance of Carnegie Mellon. Right now, you don’t,” Larcom said.

In addition to creating a sense of campus identity, Itkowitz and Godbole also hope the crosswalks will promote safety by clearly delineating the extent of the sidewalks.

The plaid could be laid down in a number of ways, including the use of traffic paint and asphalt printing. A third option is the use of thermoplastic tape, a skid-resistant, reflective, and durable tape that is superheated onto the street.

Itkowitz and Godbole see the tape as an example of technological innovation that is consistent with the university’s core goals.

“Carnegie Mellon strives to be an innovative community, and having this [crosswalk] will be really unique,” Itkowitz said.

Itkowitz, who does not have funding for the project, is planning to fundraise within the university’s administrative and academic departments, and, if necessary, at the Student Senate and Graduate Student Assembly.