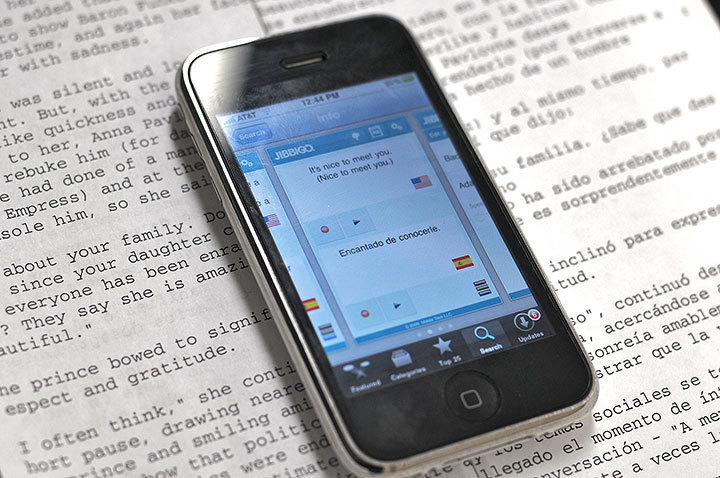 Jibbigo has made on the go translation much easier by interfacing it with the iPhone. Jibbigo was developed by Mobile Technologies, a Carnegie Mellon spinoff. (credit: Cassie Wallace/Photo Staff)

Jibbigo is an iPhone application created by Mobile Technologies — founded by Alex Waibel, a professor in Carnegie Mellon University’s Language Technologies Institute — that allows for effective, simple translation between Spanish and English.
It is a powerful piece of software that its creators hope will provide both monetary and humanitarian benefits.
The first thing you notice about it is the name, which was chosen for the pragmatic reason that the URL for it was available and that there were no other applications with a similar name.

It is derived from the words “gibberish” and “go.” Gibberish is what the application hopes to fight and “go” is the suffix attached to the names of different languages in Japanese. Jibbigo is the culmination of nearly 20 years of work, which started out as a mere infant of a program that could only work with 500 words and specific sentences and which had to run on powerful computers. Waibel feels that until recently, there was “no concern about making [the software] for people and no concern for the resources [it used].”

The developers of Jibbigo have gone to great lengths to remedy this. While it is still a bit slow on the older generation iPhone, it is surprisingly quick on the newer versions and is extremely easy to use and understand. Jibbigo is used to convert speech in English to speech in Spanish or vice versa and is thus called a bi-directional translator. According to Waibel, this requires “six modules, two speech recognizers, two translators, and two voice synthesizers.”

All the user needs to do is tap and hold the record button next to the flag representing the language they want to speak in, and then speak a few sentences. Jibbigo then does all the work. It provides text versions of both what was said and the translation and also speaks the translation aloud. If the user misspeaks, all they have to do is shake the phone to undo it.

The software has a database of 40,000 words that it can use to interpret what is said, and a dictionary of many more words that it can speak and translate word for word, but not understand. One can also type in what one wants translated, and it will translate it and then speak it. A future (free) upgrade of the software will also allow the user to add words to the database so that Jibbigo will be able to recognize non-standard words automatically. Finally, one can give a particular translation a “thumbs down” and send the developers an e-mail about the problem, which will allow them to improve the software.

It doesn’t take much thought to realize that this application would be very useful for tourists in foreign countries when they don’t know the language. Instead of fumbling with a phrasebook or being forced to hire a translator, all they would need to do is whip out an iPhone.

But tourists are not Waibel’s only, or indeed primary, target audience. He says that he wants “to pursue a humanitarian goal” as well and that the goal of his company (Mobile Technologies) is “to earn some money by selling this software ... and build these devices for the developing world.” His concern is well-placed, as in many cases, the greatest problem faced by aid workers in foreign countries is being unable to speak the local language. Up until Jibbigo, they used rugged laptops (costing thousands of dollars each) to make use of such speech-to-speech translation software.

Such translation is now available for a fraction of the cost. Indeed, doctors from the East Liberty Healthcare Center belonging to the Shoulder to Shoulder initiative in Pittsburgh are currently using Jibbigo in Honduras. Jibbigo also has potential applications in the military, where, according to Waibel, departments are spending millions to develop effective translation software for Arabic. Waibel’s future plans for Jibbigo primarily involve adding more languages to the application so that it can be used in a wide variety of situations.

Because of the difficulty of implementing the translation software, he has to choose languages carefully, pointing out that he needs not just “languages where we can make money, but also languages where there is a humanitarian need.”

Jibbigo is a quiet, unpretentious application. Simple at first sight, it hides extreme complexity and extensive research.
Waibel complains that “science fiction is always a research project, never for real,” but he also notes with a smile, “this is like science fiction.”