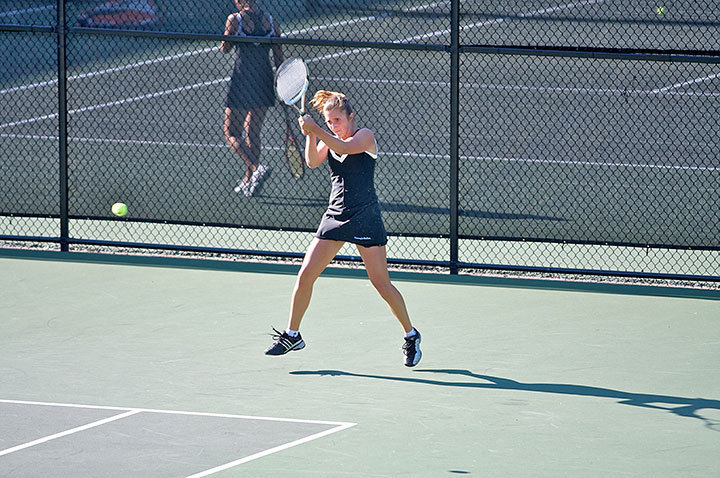 The Carnegie Mellon women's tennis team traveled to Fredericksburg, Va. to compete in the Wilson ITA Southeast Regional from Sept. 26–28. The Tartans went into the tournament with three top-10 seeds in singles, and the doubles team of sophomore Laura Chen and junior Ashley Herrick seeded first in doubles; they left the tournament with Chen as the singles champion, sophomore Courtney Chin as the runner-up, and the team of Chen and Herrick as the doubles champions.

Tapak's first foray into ITA competition went well, as she also took both of her opening matches, winning 6–3, 7–6 (7–2) over Washington and Lee's Ann Morris before handling Kelly Fahmer of Salisbury University 6–1, 6–2. She would go on to win once more on day two before losing to Carolyn Warren of Johns Hopkins in the quarterfinals.

Chen and Chin continued to roll in singles on the second day of the tournament. Chen won her round of 16 and quarterfinal matches 6–1, 6–1 and 6–0, 6–1 to make it to the semifinals, while Chin punched her ticket to semis with wins 6–1, 6–1 and 6–2, 6–2. All four wins came against players from Johns Hopkins. The Chen/Herrick duo won both of their matches by 8–2 scores to make it to the semifinals, while the team of Chui/Tapak followed suit with 8–4 and 8–3 victories to set up a semifinal showdown against their teammates. Chin and Tam completed the day two dominance with 8–1 and 8–6 victories.

"Laura and I had a great year last year so we hoped we would have a good tournament to start this year," Herrick said. "There were a lot of great doubles teams this year that made us work extra hard."

Carnegie Mellon continued to showcase its prowess on the final day of the tournament. Chen won her semifinals match over Hopkins' Carolyn Warren, and Chin followed suit and nabbed another win 6–2, 6–2 to reach the finals as well. The resulting all Carnegie Mellon singles final was a showdown of intensity and skill; Chen triumphed over Chin 6–2, 2–6, 7–6 (4) after a grueling two and a half hour match.

Later that day, Chen teamed up with Herrick, and the duo beat their teammates Chui and Tapak 8–3 to advance to a tough finals match against a team from Johns Hopkins. Chen and Herrick eventually won the marathon match up, 6–2, 4–6, 10–8 to claim Carnegie Mellon's second title of the meet.

"It feels great winning two [ITA] titles," Chen commented. "I'm excited for the [ITA] nationals that are coming up. It was great to see all Carnegie Mellon finals for both singles and doubles. I think it's a good sign that our team is going to have a very good season. Personally, for the spring season, I hope to continue playing well and maybe have a better record than last year. For the team, I would definitely like us to be able to go to the NCAAs again."

"The spring looks hopeful for our team," Herrick added. "We have a lot of great depth, it seems that everyone came back ready to compete and we're all looking forward to seeing what we can do. I think the team as a whole has a great shot at winning the conference and doing some exciting things."

The team will ride their momentum into a dual match at Oberlin on Saturday, Oct. 10 at 9 a.m.