Tuition: It costs more to get less 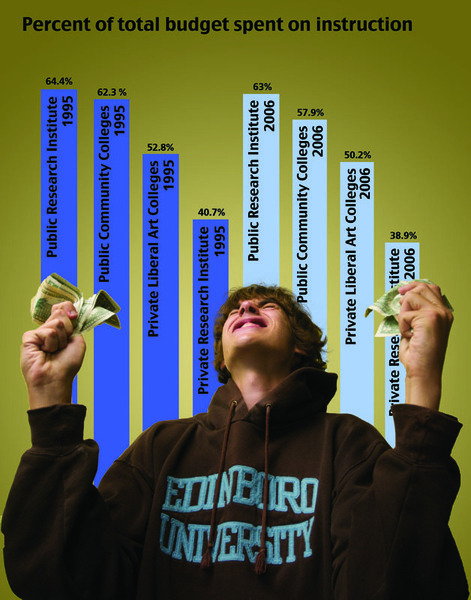 The study was based on data reported to the federal government, and it illustrated that the percentage of a college or university’s budget spent on actual instruction has declined, while the amount allocated to administrative costs has escalated, according to a New York Times report.

The Delta Project is a nonprofit aiming to enhance the quality of American higher education while focusing on monitoring and lowering costs.

Jane Wellman, the executive director of the Delta Project on Post-secondary Education Costs, Productivity and Accountability, said, “The institutions ... are slowly disinvesting in the teaching function.... Students are paying more, and a greater share of the costs, but are arguably getting less.”

In 1995, public research institutions spent 64.4 percent of students’ tuition on instruction, yet in 2006 — when the study was done — it had declined to 63 percent. At public community colleges, the budget went from 52.8 percent to 50.2 percent, but private research universities, on average, suffered the most.

Instruction at private research colleges went from being allocated a 62.3 percent share in 1995 down to 57.9 percent in 2006. Essentially, education shares declined everywhere.

However, at private research institutions, tuition increased to match spending on educational instruction, meaning that the amount spent on instruction rose.

At public research universities, had tuition increased just to match educational instruction spending, prices would have increased only 2.5 percent, as opposed to 29.8 percent.

Similarly, state and community college tuition would have declined by 2.1 percent and 5.8 percent instead of rising by 29 percent and 18.1 percent, respectively — in large part due to decreases in government spending.

“I find it somewhat a portrait of society. The rich get richer, the poor get poorer, and the middle, well, they get poorer too,” said R.F. Culbertson III, Carnegie Mellon professor of entrepreneurship.

Some students do qualify for aid, though, because of their exceptional intelligence or financial circumstances.
“I heard once that tuition has an element of progressive taxation.

“Something like 70 cents of every dollar of tuition increase is returned to students with greater financial need,” said Baruch Fischhoff, head of the decision science major at Carnegie Mellon.

“Students in the American middle class are in a tough position,” said Sarah Strano, a senior civil engineering student at Carnegie Mellon. “Often, their parents can’t afford to write a check for their tuition, but they don’t necessarily qualify for a lot of aid either. Having to worry about paying back student loans can significantly decrease the opportunities students are willing or able to take.”

The Delta Project’s study does suggest that students at Carnegie Mellon and other elite private research institutions are getting an advantageous return on their investment.

“A reasonable question for any institution is whether it provides something valuable that students can’t get elsewhere. I’d like to think that discussions — both class and individual — project work, and participation in research projects here fit that bill,” Fischoff said.

Culbertson said that the best students go “to good schools that attract the best professors and the best-paying jobs — so the vicious cycle begins. I actually see CMU — and all the top 10 institutions — being huge beneficiaries of this cycle, and I suspect the brand will continue to improve because of it.”