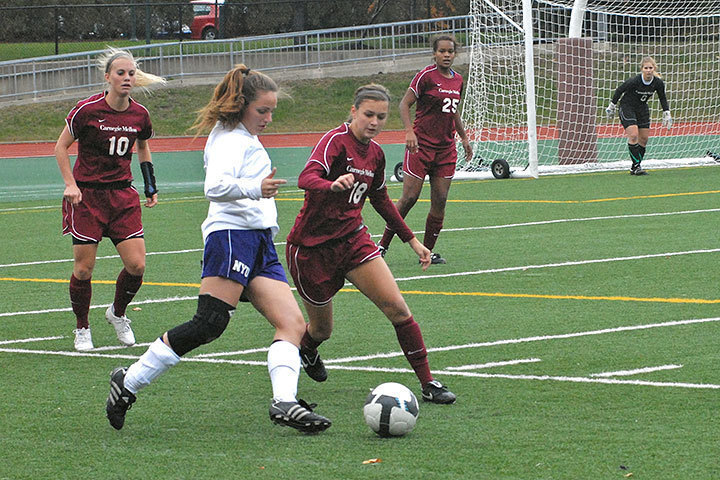 On Oct. 18, the Tartans women’s soccer team ended a long week of soccer by battling New York University into second overtime for an eventual 1–0 victory as part of the University Athletic Association tournament.

Carnegie Mellon’s loss to the Bears was only their third shutout loss of the year, and their offense could muster little more than two shots on goal by junior Emily Overstreet. Hosting Brandeis, sophomore Elsa Wu scored the team’s only goal to secure the tie. She now leads the team with six.

Junior goalkeeper Anya Royen was solid against New York, making seven saves throughout the game. First-year Lissie Arndt had two shots saved, while Overstreet and senior Casey Garth each had one.

Wu also put pressure on the Violets with two shots of her own, the first off the crossbar of the goal in the 69th minute and the second wide at the start of the first overtime.

Overstreet and first-year Katie Davis combined to give the Tartans the winning goal shortly into the second overtime. Overstreet pulled off a corner kick to Davis, who headed it in for the winner and her third goal of the season.

Davis was ecstatic about the Tartans’ first UAA win and scoring the winning goal: “I’m really excited about the goal, but it really was a team effort to get us there. We played over 100 tough minutes and everyone contributed.”

“We have an amazing team with lots of talent and I am so proud Katie scored,” Overstreet said. “It was an awesome ending to an overall great game and I can’t wait until the next one.”

The Tartans will be on the road next week to play Case Western Reserve University on Friday at 7:30 p.m. in the UAA tournament.