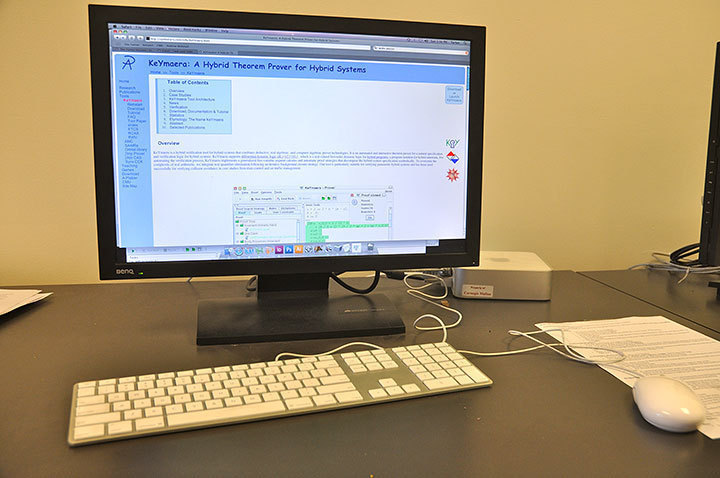 Above is a picture showing Platzer’s website, describing KeYmaera. KeYmaera is a tool that can analyze anti-collision algorithms to test their effectiveness.

This year, Andre Platzer beat out hundreds of researchers to earn a spot in Popular Science’s Brilliant 10. This competition, now in its fifth year, awards 10 people who push the limits and show remarkable insight in their field of study. Platzer, an assistant professor in the Computer Science Department, is not yet a household name, and his contributions to the world might have gone unnoticed until now. But without him, car accidents, train collisions, or even mid-air plane crashes would be far more frequent.

When he was younger, Platzer was a successful ballroom dance competitor. Then the world of mathematics and computers cut in, and it has taken him to the current limits of systems analysis.
His current work involves cyber-physical systems (CPS), which are systems that include both computerized and physical aspects. Cars, for example, are cyber-physical systems: They move along the road in physical space, and also include digital computer controls. This can be seen in aircraft, trains, and robots. “It turns out that a lot of systems are natural CPSs, because they move,” Platzer explained. “Movement is important for understanding collisions.”
Platzer’s research involves the improvement of train and air traffic control system designs.

He wants to find out if these systems are reliable in real-world situations, and if computers can make the right decisions to reliably avoid collisions. Platzer said, “[Trains and airplanes] are controlled by computers, and their control choices are crucial to ensure they can’t possibly collide.” Popular Science mentioned Platzer’s KeYmaera Hybrid Verification Tool as significant and necessary software of the modern age. KeYmaera was created to be more effective than any other limited model present at the time, which tested safety algorithms for certain conditions. This program can be used to check anti-collision algorithms for aircraft and trains through the input of velocity and altitude, among other variables.
Already, Platzer has found a flaw in a proposed aircraft collision-avoidance algorithm: Given the right circumstances, the planes, instead of circling and avoiding each other, will be put directly on a crash course. Often, computer systems are built that surpass our understanding of them. We cannot truly know whether a system can handle every scenario it comes across.

As Platzer said, “The primary limitations today are in understanding the systems that are being built.” As advanced as anti-collision systems are today, it is nearly impossible to account for all the variables in a real-world scenario. “The really tricky part is how to figure out if the interaction of physics with control always works correctly, which can be surprisingly subtle,” Platzer said.

He also noted some of the shortcomings of previous testing methods: “Unfortunately, these analysis approaches were mostly limited to linear dynamics, but the real world is highly nonlinear. Likewise, the number of variables were restricted to around four.” It is because of this that Platzer is working to broaden anti-collision analysis to become more dimensional and nonlinear, and more like the real world. Platzer sees plenty of room for progress in his work. His ideas will not be restricted to collision avoidance in aircraft and trains, but to anyone hoping to build and design a complex system. Computers control much of our world nowadays, and it is imperative that they do not malfunction when problems arise.

“So far, the particular application scenarios that I looked at already were mostly from the transportation domain, including air traffic and railway control. Because of the ubiquitous nature of cyber-physical systems, applications are truly all over the place, say in power grids, robotics, medical devices, power plants, and pacemakers.” There might be no better word than ‘brilliant’ for research that impacts so many fields of study.