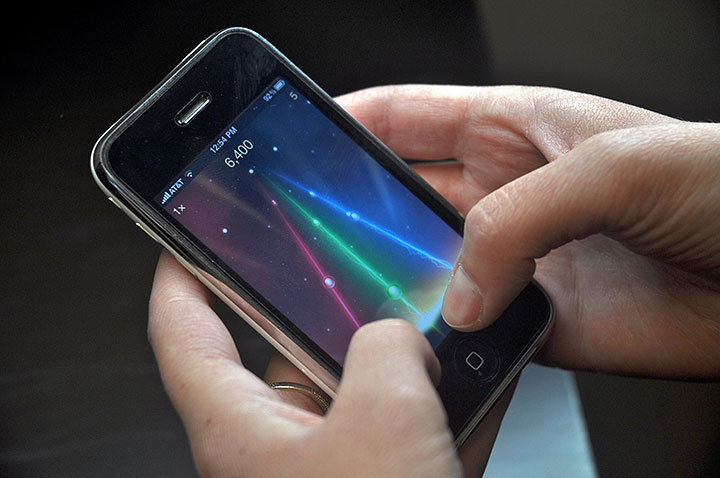 With the advent of the Graphical User Interface — GUI (pronounced “gooey”) for short — the mouse replaced the keyboard as the primary input device. The mouse has been the input device of choice for computers since 1981. And although they have been commercially marketed from as early as 1983, the touchscreen is only just beginning to gain more importance. Touchscreens have evolved much since their inception and can now be manufactured with very high sensitivities and accuracies.
There are various ways a touch-sensing screen can be devised. The most widely used methods to detect screen-touches include capacitive, infrared, and resistive sensing. Of these, capacitive touchscreens are now ubiquitous (pronounced “iPhone”).
Resistive touchscreens, such as that of the Nintendo DS, are made with two parallel layers of the conductive compound, indium tin oxide (ITO). ITO is printed onto a stiff, transparent bottom layer and a flexible, transparent top layer. Upon being pressed, the top layer flexes and makes contact with the lower layer, altering the resistance of the ITO layers, indicating the location of the touch.

This system of touch-sensing only allows for a single point-of-contact detection. Infrared-sensing touchscreens don’t detect physical touch; they detect the obstruction of infrared light. There are rows of infrared light emitting diodes along two adjacent sides of the screen, with infrared sensors aligned along the opposite ends. Any touch is detected as an obstruction to the infrared light emitted from the horizontal and vertical directions, giving an exact location for the applied touch. The drawback of this method of sensing is, again, that depending on the locations of the touches, only a single touch at a time may be detected. Capacitive touchscreens, however, overcome this drawback. Capacitive touchscreens comprise two kinds: surface capacitance and projected capacitance. Of the two, the latter is more accurate, and therefore the preferred, method of touch-sensing. Projected capacitance touchscreens are, like the resistive touchscreens, composed of two layers.

In this case, however, both layers are stiff and transparent, with the ITO layers and the insulator sandwiched between them. The ITO is arranged in orthogonal patterns on the two layers, and this creates a grid of capacitors — devices that store electrical charge. These capacitors create electric fields that are projected out of the plane of the top layer. When the user touches the screen with a finger, it alters the electric field in that area of the screen. The altered fields then cause a number of capacitances in the same vicinity of the touch to get changed. The changes in capacitances of the entire surface grid are then plotted using a computer program. The program gives an output graph showing the exact location of the touch. This is then used by the device to perform other functions (selecting an application, typing, etc.). Projected capacitive sensing allows for multiple touch-sensing as well, as a touch only alters the capacitances in its locality, leaving the rest of the screen surface in its normal, undisturbed state.

Multiple touches are again identified using the same software to measure and map out the changes in capacitance. The resulting plot will have as many peaks as there are simultaneous touches. This is the chief reason for its being used in most touch screens built today. Many iPhone or Zune HD users will be aware of the fact that the screen is unresponsive to touches when the user’s hands are gloved. The reason for this is that the gloves prevent the user’s finger from interacting with the projected electric fields. Thin gloves may still work, while thicker gloves usually do not. This is also why a number of companies are trying to produce gloves solely for iPhone and Zune users. To counter this problem, the makers of the touchscreens can suitably set the sensitivity. A very high sensitivity will allow even shielded touches to be detected, though at the risk of detecting a number of unintended brushes against the screen.

With the rush to create appealing netbooks, there has been a frantic search for newer input devices that will help reduce the weight and size of existing laptops. The touchscreen does away with the need for a keyboard and a mouse, and today it seems well poised to take over as the ideal input device for smaller computers and hand-held devices. Sadly, tests have shown the touchscreen to be more of a nuisance to desktop users mainly because they induced fatigue in the test user’s arms. As a result, they may not be as effective an input device for desktops as they are for smaller, handheld devices.