Albom asks readers to ‘have faith’ 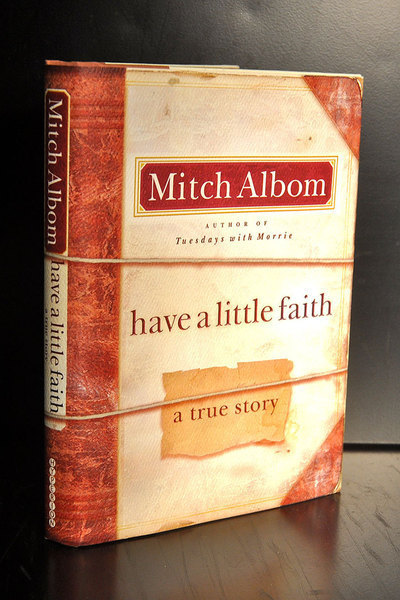 Mitch Albom's newest book *Have A Little Faith* is the eulogy of his 82-year-old rabbi. (credit: Kristen Severson | Photo Staff)

Eulogizing someone you are close to is hard, but what’s even harder is being asked to talk about someone you don’t know at all. That is why when famous author and sportswriter Mitch Albom was requested by his 82-year-old rabbi, Albert Lewis, to write his eulogy, Albom was dumbfounded. Caught in a quandary, Albom decided to meet with Lewis, or as Albom fondly calls him, “the Reb,” to get to know him better. While Albom wasn’t aware of it then, agreeing to eulogize his rabbi would lead him down a path that would result in him publishing his second nonfiction novel, Have A Little Faith, and help him to discover his own faith in the process.

Albom catapulted to fame with the release of his first nonfiction novel, Tuesdays with Morrie, which was converted into a popular TV film by Oprah Winfrey. Since then, Albom has been active in the sports and literary fields by continuing his radio talk shows and writing more books like The Five People You Meet in Heaven and For One More Day.

Last Tuesday, Albom made an appearance at the Byham Theater, and the residents of Pittsburgh got a chance to listen to him talk about his latest release. As witty and engrossing as his writing, Albom captivated the audience with nuances about how the events leading up to the writing of the book unfolded, and the thought process behind its creation.

The book follows the story of two religious figures: A rabbi and a priest, Lewis and Henry Covington, emerge from completely different backgrounds and separate religions, but unite in their faith in God.

While Lewis’ story relates with what we usually expect from a man of faith, Covington’s succeeds in surprising us all. Growing up in a broken home, Covington’s childhood is fractured, and after his father’s death, he enters a life of crime. He passes his years trafficking drugs, serving time in jail, and being a part of local mobs, but what finally brings his downfall is his drug addiction. Crazed by the need to consume more drugs, Covington spends all his money and is reduced to stealing from his friends, and on one lonely night — afraid that his friends will return to make him pay for his actions — Covington begins to pray to God, pleading that he will forever serve God if he is spared today.

Years later, Covington is now a transformed person: a pastor in Detroit, Mich., Albom’s hometown. He looks after a crumbling church that serves as a shelter for homeless people, but can hardly be considered a shelter because of a large hole in the ceiling that lets in all the elements, making the freezing winters of Detroit especially difficult.

Albom, who has opened three of his own charities to aid the impoverished in Detroit, is interested in helping the homeless, and in his attempt to do so, crosses paths with Covington and befriends him.

During his talk, Albom mentioned the kind of person he was before he grew to know Lewis and Covington — detached from religion, and happy to be that way. But by meeting these two remarkable individuals, Albom got a chance to speak with them about why they believe and what keeps their faith going: questions that are universal.

By describing how two men discovered and keep their faith, Have A Little Faith attempts to spread the word about how believing in a higher being can make people’s lives seem so much less lonely and helpless than believing in nothing at all.