To eat or not to eat? 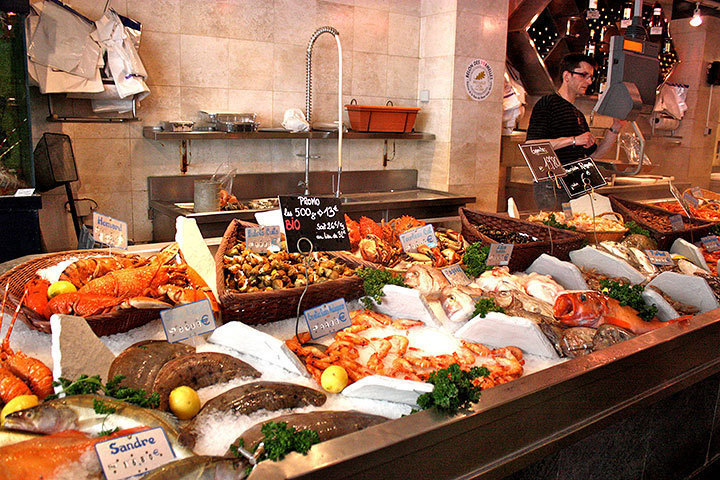 Seafood markets offer a variety of fish for the consumer, but it is important to know which of these species of fish are healthy for both the consumer and the environment. (credit: Chalita Maneetham | Staffwriter)

At some point during high school, I swore off eating shark fin and all its manifestations. It was not solely an environmentally friendly decision — sharks are brutally killed for the primary purpose of obtaining its fin — but with the abundance of fake shark fin in the market, why be irresponsible when it comes to health?

The numerous available sustainable seafood advisory lists make it easier for consumers to be responsible. One of the most well-known guides, Monterey Bay Aquarium’s Seafood Watch, is a program that aims to raise awareness among seafood eaters to enjoy seafood sustainably and responsibly.

On its website, Seafood Watch states that its members “believe that seafood from sources, either fished or farmed, that can exist over the long-term without compromising species’ survival or the health of the surrounding ecosystem is sustainable.” Apart from this strong aim, the most attractive part of Seafood Watch is that it is user-friendly.

Seafood Watch updates its list from time to time, and the guide can be downloaded from the Monterey Bay Aquarium website, www.montereybayaquarium.org. But what really makes Seafood Watch highly accessible is its iPhone/iPod touch application. Electronically updating the list has never been easier.

The list is sorted by region for easier navigation. Once you’ve chosen a region, you can view the list alphabetically. Each fish is rated according to a color scheme as Best Choice, Good Alternative, or Avoid. Each list also gives some explanation about the market name, health alert, and summary of why that particular fish is rated Best Choice or Avoid.

It’s not only concern for the environment; industrially grown animals are unhealthy to eat. Fundamentally, when anything — fish, vegetable, or chicken — is produced on a large scale, the producer will put them in an artificial environment for more efficient production. For vegetables, these man-made modifications come in the form of pesticides, while farm-raised salmon are loaded with antibiotics. Essentially, antibiotics prevent or slow down the growth of bacteria, beneficial or not. If we are so strict about taking just the precise amount of prescribed human antibiotics, why should we consume the animal version uncontrollably?

There’s a need for consumers to start thinking about what’s on their plate and where it comes from. It’s about understanding food from start to finish — the entire “life cycle.”

One of the most famous fish featured in discussions about “green” seafood is blue fin tuna. Blue fin tuna, the filet mignon of all the fish in the ocean, is highly priced by all sushi restaurants. At the Nobu restaurant chain, owned by Nobu Matsuhisa, customers can find blue fin tuna on the menu, and, lately, the restaurant and owner have been under attack for serving this endangered species of fish. Being a high profile restaurant, food conscious people are looking for Nobu to set the right example by sending a responsible message to consumers. Celebrity clients, such as Gwyneth Paltrow, have publicly sworn off Nobu until the restaurant’s position on including blue fin tuna on their menu has changed.

With the spotlight on blue fin tuna, we often forget that this endangered tag is not a permanent one. Hold on to your appetite and find a good substitute on Seafood Watch. With lower consumption, these species will be available again, and this is precisely the reason that Seafood Watch and other lists are constantly updated. Fish are taken on and off the list depending on whether consumers want more or less of them and how the industry treats the species.

Mark Bittman, a *New York Time*s food writer, put it a simpler way: “Pretend it’s whale. Would you eat it if it were whale?”