Blood, fangs, and bats: Dracula comes to the ’Burgh 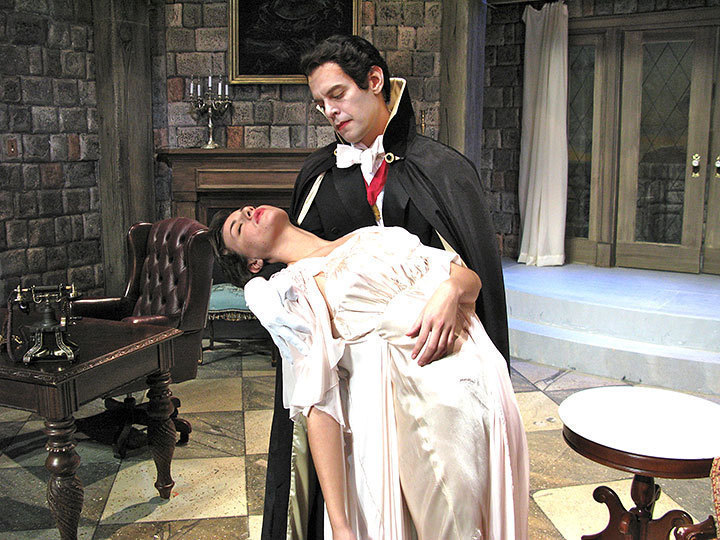 Count Dracula prepares to quench his thirst by sucking the blood of Mina, who lies hypnotized in his arms. (credit: Courtesy of F.J. Hartland)

An eerie voice, heavily laced with a foreign accent, greeted the audience as the show was about to begin. “Pleeese turn off your cellular phones and refrain from text messageeing as eet disrupts the actors of the show... espeeecially Count Dracula.” The announcement ended with an evil laugh. With such a start, it was evident that the play was going to be entertaining, albeit with a twist.

University of Pittsburgh Repertory Theatre’s presentation of Count Dracula was the perfect pre-Halloween treat — a comedy about one of the most infamous horror characters of all time. The play, a comic retelling of the famous novel Dracula, was originally written by Ted Tiller in 1971 and was excellently reenacted by Pitt Rep.

The first thing that was noticeable about the play was the lavish sets. The gothic style of the room in which most of the scenes took place suited the mood of the play. The set was carefully detailed, right from the balcony doors that opened to a view of Count Dracula’s castle to the suit of armor standing in the corner. The sets thus served to create the mood of the play and added a dark and mysterious air to the entire performance.

The story, which takes place in Dr. Seward’s Asylum for the Criminally Insane, revolves around how Wilhelmina “Mina” Murray (played by Ana Noriega), who lives with the Sewards, is mysteriously ill after her first acquaintance with a newcomer in town — the Transylvanian Count Dracula (played by Sam Turich).

The play outlines the tribulations of Dr. Seward (played by Bruce McConachie), his German friend Helga Von Helsing (played by Elena Alexandratos), and Mina’s fiance Jonathan Harker (played by Eric Prendergast), as they set out to try and kill the count, who they realize is a vampire.

Other characters, notably Dr. Seward’s sister, Sybil (played by Holly Thuma), added excellent comic touches to the otherwise dark theme of the play. Sybil’s witty one-liners and fetish for drinking sherry made for some very good laughs. Cameron Crowe, who portrayed the character of Renfield, Dracula’s minion — as well as a ward of the asylum — and Noriega put on notable performances.

Crowe’s expressive acting while depicting an insane character was quite remarkable, as was Noriega’s acting as she portrayed the personality change Mina underwent as she sank deeper and deeper under the vampire’s spell. Turich’s evil smile and regal attitude as he depicted Count Dracula were also a pleasure to watch.

The performance was also full of a number of special effects that made the play all the more entertaining. One such effect was that the light in the window of Dracula’s castle always went out when Dracula was supposedly on the move and out of his house. Other effects also helped add to the enjoyment of watching the play — Count Dracula was able to pop up in a picture frame hung in the Sewards’ house, the suit of armor in the room turned its head obligingly toward Dracula when he summoned it, and Dracula also turned into a bat in front of the audience, zooming right out of the stage over the heads of the astounded audience.

One of the most enjoyable scenes of the play was when Dracula was shown to be invisible. A ray of light hovered around the stage in this scene, indicating the presence of Dracula. When the ray fell upon a chair on the sets, the chair swung back and forth, and when it fell upon the couch in the room, a distinctive sound of feet rubbing against leather could be heard.

The highlight of the play was the very end. The characters were rushing to Dracula’s tomb in this scene, and instead of entering the set from the wings, the actors ran down to the stage by coming through the balcony seating area, walking amid the audience, and finally climbing down to the stage by a side staircase.

The actors also carried flashlights during this little chase, allowing the audience members to feel that they were a part of the story that was taking place.

Count Dracula thus boasted of some excellent special effects and great performances. Check out the performance for some Halloween fun. It provides spine-tingling moments, but at the same time retains elements of a light-hearted comedy.