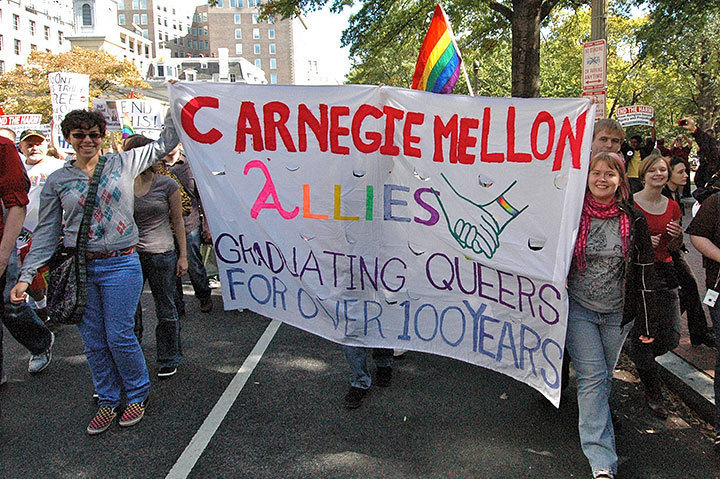 Pictured above are Carnegie Mellon students who attended the civil rights march in Washington, D.C. The President of ALLIES, Merri Ebel, helped in the organization of the trip to the nation’s capital. (credit: Isaac Jones/Photo Staff)

Last Sunday, Oct. 11, students of Carnegie Mellon organized a bus to join the National Equality March in Washington, D.C. The march was performed to raise national awareness of lesbian, gay, bisexual, and transgender (LGBT) civil rights and to demand full and equal protection in all 50 states. Specifically, the goal was to take action in repealing several pieces of national anti-gay legislation, including “Don’t Ask, Don’t Tell” (DADT), which limits the rights of homosexuals to serve their country in the military, and the Defense of Marriage Act (DOMA), which reserves marital rights to heterosexual couples.
There were also several events in the days leading up to the National Equality March on Sunday. Friday, there were several parties in and around Washington, D.C. in anticipation of the weekend’s events. On Saturday, there was an equality march and other activities for students, which were followed by the main march on Sunday at noon and the rally at about 2 p.m.

Carnegie Mellon ALLIES, along with student organizations from almost 40 other universities nationwide, helped sponsor and attended the march.

There were over 250,000 other people in Washington, D.C. during the weekend, most of whom were students from all over the world who joined forces to march the streets of Washington from McPherson Square to the Capitol Building. Some of the chants that were heard included: “Hey, Obama, let mama marry mama,” “Gay, straight, black, white. All we want is equal rights,” and “What do we want? Equal rights. When do we want them? Now.” The end of the march was followed by a massive rally in front of the Capitol with 30 different speakers from around the world. Among them were Cleve Jones, Lt. Dan Choi, Judy Shepard, and Lady Gaga.

Merri Ebel, the president of ALLIES, the Carnegie Mellon organization that planned the trip, mentioned that “the newspapers predicted there to be about 50,000 people” at the march and rally. She was very happy to see people from “all sorts of groups come together that were from different states and from different cities and from different backgrounds to rally for the same cause.” Among many other college groups which attended the national event, it was also very uplifting to see “religious groups, a mothers’ group, and a few labor unions,” Ebel said.

There have been several marches in the past; however, a National Equality March in Washington, D.C. of this magnitude has not happened since the term of President Clinton, who implemented DADT while he was in office. During his term as Indiana senator, Obama was supportive of gay rights and even scored high on a test issued by the Human Rights Campaign that measured sponsorship of key issues and rights pertaining to gay and lesbian citizens. More recently, the Matthew Shepard Act, which vows to protect the victims of hate crimes, was passed through Congress this past Thursday. Obama promises to sign the act into law by the end of this month.