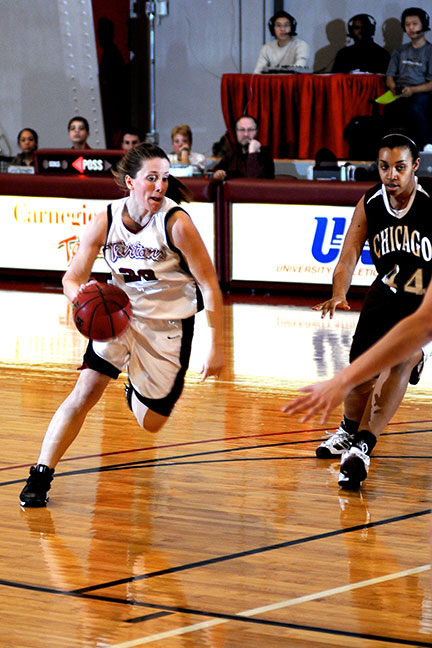 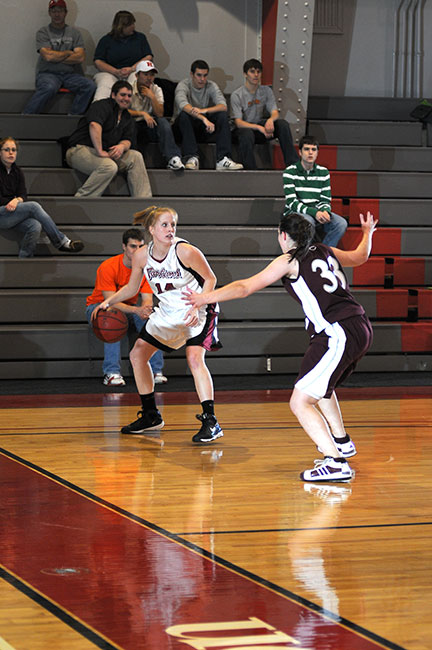 Last Monday, the Carnegie Mellon women’s basketball team traveled to Oberlin College to take on the Yeowomen. In a tight contest, the Tartans used strong defense to come up victorious, 52–47. Then the Tartans played host to the University of Chicago on Friday and Washington University in St. Louis on Sunday. Chicago, however, proved too strong as the Tartans fell 66–38. With that, the Tartans dropped their record to 5–10 on the year and 0–4 in University Athletic Association (UAA) action.
Against Oberlin, the Tartans led 20–16 with 6:58 to play in the first period, after a jumper by first-year Jacki Cortese. Oberlin then rallied with a 12–5 run to end the half, leading 26–25.

The second half started with high defensive pressure from the Tartans, forcing the Yeowomen into six turnovers in seven possessions. The Tartans then capitalized on the Yeowomen’s mistakes, with a 10–2 run, resulting in a 35–28 advantage. Senior Stacie Aleski had two consecutive baskets during the run.

Oberlin fought hard, but the Tartans never lost their lead. A three-pointer by senior Colleen Light put the Tartans up 50–45 with 2:06 to play. Tough defense then prevailed for the Tartans, and Light finally sealed the win with two free throws with just five seconds remaining.

After the game, Light commented on the team’s performance, “Our main focus was to play great team defense and use that to create our offense.”

Cortese led the Tartans with 12 points off the bench while Aleski tied her season-high with 10 points. Light finished with seven points while senior Rachelle Roll scored nine and grabbed five boards.

Against Chicago, the Tartans looked to continue their mindset of turning defense into offense. Prior to the start of the game, Aleski gave The Tartan insight on the team’s approach: “The focus is to stop them with tough team defense and make every trip down the floor on offense a scoring situation.” Light added onto her teammate’s response, “In order to be successful against Chicago, we would have to continue to play solid defense, take care of the ball and limit our turnovers.”

The strategy seemed to prove effective as Carnegie Mellon jumped out to an early 6–4 lead off a three-point basket by Aleski. However, the Maroons fought back with a 12–2 run to take a 16–8 lead with 12:17 to go in the first half. They continued to build on that lead, obtaining the biggest lead of the half, at 30–13. The half ended with the score at 33–19, with the Maroons leading.

The Tartans came out strong in the second half, scoring the first five points to cut the deficit to 33–24. However, Chicago’s fierce shooting proved too strong for the Tartans as Chicago eventually prevailed, 66–38.

Chicago was guided by a core of players as junior Molly Hackney led the charge with 12 points. Sophomore Alex Leach and junior Micaela White cashed in with 11 and 10, respectively. Hackney and White totaled eight rebounds each for the Maroons.

Next, the Tartans played host to 23-ranked Washington University in St. Louis and fell 61–72 to close out the UAA double-header. Although the Tartans led 34–26 after the first half, the Bears rallied and stepped up their offense to take the win. Aunskt led the team in total points with 18, followed by Aleski with 14 points and seven rebounds, and Cortese with 13 points and eight rebounds.

The Tartans travel to Emory University this weekend to take on the Emory Eagles and Case Western Reserve University.