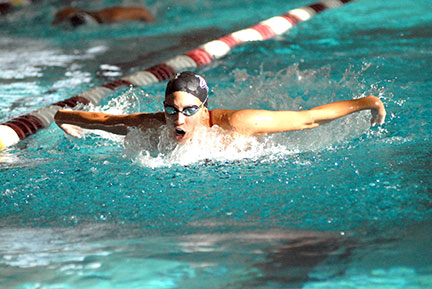 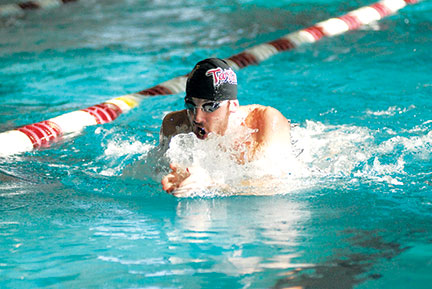 The Carnegie Mellon swimming and diving teams finished strong in their last home meet of the year against Westminster College this past Saturday. The men’s team finished with a 151–111 victory margin while the women closed out the meet with a final score of 153–109. Both teams are currently 7–2 and have two more away meets left in the season before the University Athletic Association (UAA) finals.

Senior Tom McConnell led the sweep of the mile, taking first place in 16:10.71 and followed by Tartan juniors Jonas Altman-Kurosaki and Gates Winkler. Sophomore Josh Matthews later led the sweep of the 200-yard freestyle, finishing in a season best time of 1:44.45. Matthews was followed by his classmates Alex Hanson and Frank Olechnowicz, who placed second and third respectively.

Junior Jeff Dahlen recorded two first place finishes in the 100- and 200-yard backstroke. Touching only .04 seconds ahead of a Westminster swimmer, Dahlen closely held the lead in the 200-yard race. The 200-yard medley was won by the Carnegie Mellon quartet of juniors Scott Moorby and Jason Huber, sophomore Travis Piper, and senior Ron Papa. Papa also won the 100-yard freestyle in a time of 48.18 and later the 200-yard IM with a season best time of 1:58.94. Huber claimed first in the 100-yard breaststroke with a time of 59.28.

The women’s team recorded nine first-place finishes, the first coming during the opening race of the meet. Sophomore Brianne Burton overcame Westminister on the last leg of the 200-yard medley relay to finish with a time of 1:51.80.

Burton continued to dominate, setting career-high times of 24.73 in the 50-yard freestyle and 54.32 in the 100-yard freestyle. The sophomore was later part of the team to win the 400-yard freestyle relay with a time of 3:47.49. Team members included junior Sara Andrews and first-years Chrissy Swerkocki and Kaitlin Ahrens.
Coming away with three first- place finishes was sophomore Molly Evans. Evans finished the 100-yard backstroke in 1:00.24, the 200-yard backstroke in 2:07.97 and the 200-yard IM in 2:10.99.

Sophomore Rebecca Ussai took first in the 200-yard butterfly and her teammates Jen Sung and Victoria Adams finished second and third to give the team a sweep, both first-years. Ussai recorded a winning time of 2:12.43 and Sung recorded a season best of 2:15.48. Adams also placed second in both the 1650 and 500-yard freestyles, swimming a career-best 18:01.57 in the 1650.

On the diving board, senior Alex DeFazio scored a 259.95 on the 3-meter board, provisionally qualifying her for the NCAA Championships.

The last home meet of any season is usually a symbolic event, especially for the senior swimmers. Burton commented on the final home meet saying, “It was really nice that everyone was able to step it up, especially for our graduating seniors.” The Tartan swimmers have much to look forward to as they take on their final two opponents of the regular season, Denison University and University of Pittsburgh.

The teams will be in the pool again next weekend at Denison University. The meet begins at noon.