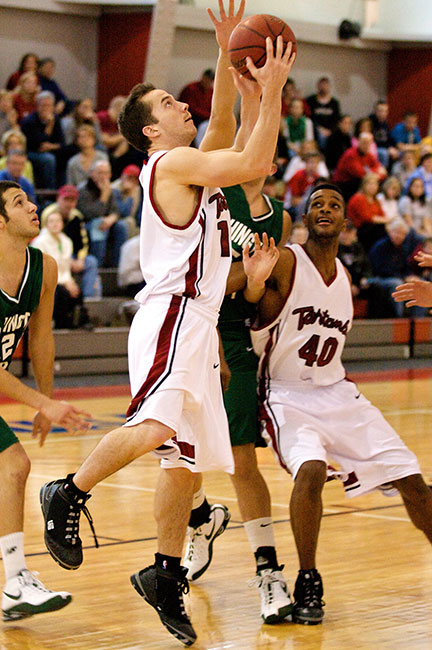 The Carnegie Mellon men’s basketball team came away 1–1 in a University Athletic Association (UAA) doubleheader this weekend, but in preparation for the UAA weekend, the Tartans took on an out-of-conference game against the Lycoming College Warriors Tuesday. The Tartans defeated Lycoming 71–56 by starting the game with a 14–4 run in the first nine and a half minutes of play. The Warriors attempted a comeback by bringing the score to 14–10, but the Tartans pulled away once again, going on a 10–2 run. Carnegie Mellon maintained the lead throughout the game, but the Warriors cut the Tartans’ lead to nine with 2:22 left in the game. The Tartans pulled away with a 71–56 victory. Senior guard Ryan Einwag led the team with 22 points, followed by sophomore Shane Rife with 13.

On Friday, the 18th-ranked Tartans took on the Maroons of the University of Chicago and came away with a 64–58 win. As a personal tradition for UAA games, senior guard Elliott Curtis dressed in his lucky Tartan plaid socks. Socks or no socks, the Tartans came out strong in the opening minutes of the game and kept the momentum throughout the game, never allowing the Maroons to take a lead.

The Tartans ran into some trouble early in the game with their leading scorer Einwag accumulating three fouls and only seeing five minutes of action in the first half. Einwag is 54.7 percent from the field this year and 38.5 percent from the three-point line. Senior Corey O’Rourke stepped up for the Tartans, scoring six points in the first nine minutes. Junior Jack Anderson helped carry the slack with seven points in the first half. The first half was a physical and defensive battle as the Maroons scored 10 of their 24 points off free throws. The Tartans ended the half with a 30–24 lead.

Anderson came out powerfully in the second half, scoring seven of the team’s first 13 points and giving Carnegie Mellon a 14-point lead with 14:44 to play. The Tartans seemed to be pulling away and fans thought the game was all but over after a monster dunk by senior Terrance Bouldin-Johnson extended the lead to 16 with 14:23 left. But the Maroons refused to cave, and they rallied after Einwag picked up his fourth foul. With just 3:46 in the game, the Maroons brought the score to 56–52, and the rest of the game came down to the final seconds. The Tartans held on and secured a 64–58 win. In the victory, the Tartans were led by Anderson with 18 points and O’Rourke followed suit with a season high of 15 points.

On Sunday, the Tartans took on last year’s national champions, Washington University in St. Louis, who are currently third-ranked. The former national champions proved to be too much for the Tartans, who fell 90–70 to the Bears. The first five minutes were an even match as there were seven lead changes, but with 6:41 to go in the half, the Bears went on a 9–0 run taking a 32–29 lead. WashU maintained its lead throughout the half entering the break with a 44–37 lead.

The Tartans cut the Bears’ lead to three early in the first half, but the Bears soon caught fire and went on a 17–0 run pulling ahead 67–47. As the second half continued, it seemed as though WashU could not miss. “We played well and we played hard but [the Bears] were shooting great,” said senior Rob Pearson. “They were the national champions last year so we knew they would be good, but we get to play them twice so we will be even more ready for the next game.”

In the loss, the Tartans were led by Anderson who scored a career high of 25 points followed by Einwag with 13.

The Tartans head to Atlanta, Ga. for UAA games against Emory University and Case Western Reserve University on Friday and Sunday.