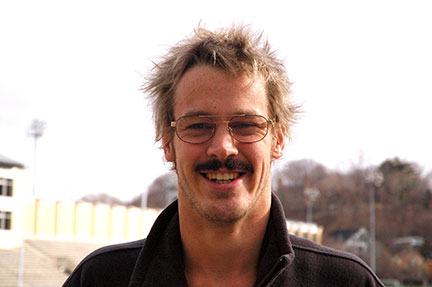 While the Tartans are keeping their eyes on a first-place conference finish this year, McConnell talked with The Tartan about his experiences as a swimmer and an artist at Carnegie Mellon. (credit: Kristen Severson/Photo Editor)

With just a handful of meets left before the NCAA Championships take place in March, senior swimmer Tom McConnell has proven that he wants to be competing until the end of the season to complete his collegiate career on a high note.

McConnell has had strong showings at the University Athletic Association (UAA) Championships throughout his career at Carnegie Mellon, and he qualified for the national meet last season.

While the Tartans are keeping their eyes on a first-place conference finish this year, McConnell talked with The Tartan about his experiences as a swimmer and an artist at Carnegie Mellon.

Tartan: Since Pittsburgh’s winter weather is usually less than enjoyable, are there any particular ways that you try to beat the cold?
McConnell: It’s pretty bitter walking to morning practice at 5 a.m. in January, so I usually drive to school to avoid the walk.

T: What area of art interests you the most, and do you plan on working with that in your career? What are your plans for next year?
M: I’m most interested in animation. I am going to pursue a career as an independent artist/animator.

Next year I will probably stay in Pittsburgh because it’s a cheap place to live and there is a burgeoning art scene with lots of great opportunities for young artists.

T: Do you have a favorite artist, or an artist that you sometimes emulate through your work?
M: There are a number of artists who influence me, and I’m constantly finding new people to be inspired by. Lately, I have been really into the animations of Fleischer studios from the 1920s and 1930s.

T: Which bands or musicians are on your warm-up playlists while you are at meets?
M: I don’t really listen to music before races.

T: Do you have any big plans for spring break as a senior?
M: Hopefully I’ll be here at school training for NCAAs. If not, I might go home and see my family.

T: Of your four years at Carnegie Mellon thus far, which would you say was the best? The worst? Why?
M: My junior year was the best since I made the most progress with swimming and work. Freshman year was the worst because I kept getting homesick.