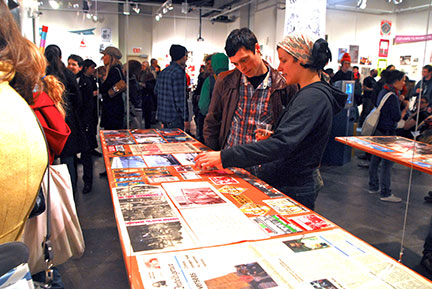 The posters were of various colors, sizes, and shapes and focused on different controversial issues throughout history. (credit: Myyk Seok | Photo Staff) 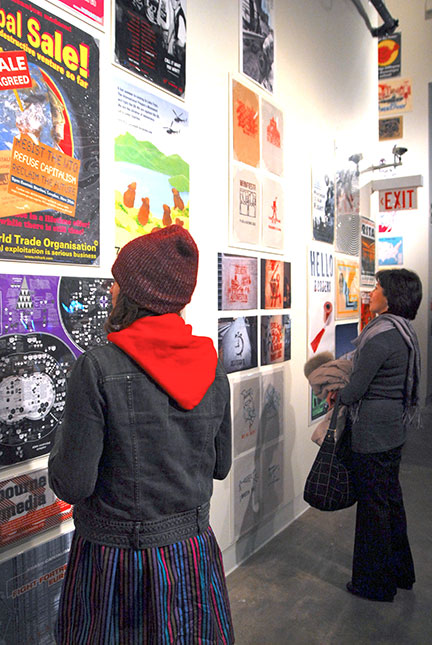 The exhibit displays numerous posters that have been instrumental in inciting social and cultural revolutions through the years. (credit: Myyk Seok | Photo Staff) 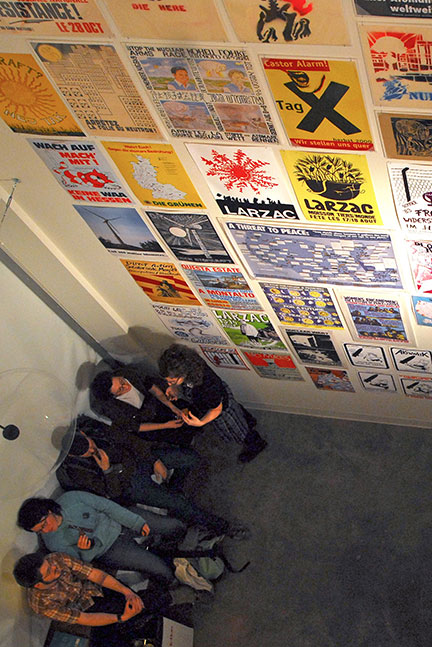 The exhibit displays numerous posters that have been instrumental in inciting social and cultural revolutions through the years. (credit: Myyk Seok | Photo Staff)

On Friday Jan. 23, artists Dara Greenwald and Josh MacPhee came to Carnegie Mellon University to introduce their new exhibit, Signs of Change: Social Movement Cultures 1960s to Now. Their work, going back almost five decades ago, displayed movements that ignited major change. From revolutions during the 1960s to ones that are still occuring today, social reform has been exhibited in many aspects of American culture, and Greenwald and MacPhee wove through a map of time with their poster and video depiction of these social changes.

Dara Greenwald is a media artist and a Ph.D. candidate in the electronic art department at Rensselaer Polytechnic Institute. Her areas of specialty include video/new media/performance, public/social art, and writing.

During its brief introduction to the upcoming piece, the audience was informed that there would be seven aspects to the exhibition. The exhibit opened with “Social Context: Understanding the social context of images is important.” During this section, we could see images that reflected important pieces to not only the curators, but history as well. An example of such a reflective piece was a film clip of people in Indonesia rising against the second president, Suharto, who opposed art. In the video, one man said that when you become more self-conscious, history becomes more important.

“History kept coming up as we did research. We had no idea [these posters] existed,” MacPhee stated, commenting on the numerous posters that came up during his search for more pieces to add to his work. One of the posters they displayed originated from South Africa. It read “*Eet geen outspan sinaasappelen pers geen zuid Afrikaan uit*,” which means “Do not consume Outspan oranges. Do not squeeze a South African,” with the image of a boy’s head being squeezed on a lemon squeezer. The poster represented a major movement: apartheid. Apartheid was the social and political policy of racial segregation and discrimination enforced by white minority governments in South Africa from 1948 to 1994. “Apartheid is not even on the radar for high school and college students, even though it [was] around until 1994,” said Greenwald.

“Autonomy: Social transformation that happens from the bottom up” was the second section introduced. At this point, the curators let everyone know that nothing in the show was contributed or produced by the government. By leaving out electoral materials, they wanted to show that “there are thousands of other ways people participate in political issues in their society.”

The third section, titled “Social Forms: All production is social and art is no exception,” included slides, posters, and a video of various struggles while we heard the lyrics of “Singing For Our Lives,” Holly Near’s song: “We are a gentle, angry people. Singing, singing for our lives.…” The impact a poster can have on someone or something is great, and MacPhee emphasized that a poster isn’t simply a poster. Production of posters is important “because in the act of making a poster or setting up camps, people build a relationship with each other.” This led into the upcoming pictures of people sitting at border camps speaking across border lines.

“Archives: Our collective history begins in the commons” is a section that deals with the topic of the origins of the posters. Some of the posters came from people who just happen to have had them in basements, and some came from museums. Others were found at institutions, but as the institutions wouldn’t allow them to be publicly displayed, they could not be a part of the exhibition. “Everyone should have access to this stuff,” said Greenwald. MacPhee commented that it was hard to save some of the posters. Some people don’t have enough money to maintain them and those who do have the money simply don’t have the will.

In “Movement as a Producer: Social movements redefine what it means to be an artist,” a poster depicts the Latin struggle with the saying “*Si Se Puede*” — meaning “yes we can.” The underlying meaning behind the heading of the section was determined by depicting “movements as producers rather than individuals,” said Greenwald. The Community Arts Project (CAP) in Cape Town, South Africa (1980s) had print shops that trained South Africans in concentration camps. The vast majority of these people weren’t artists, but some of them were activists. They took their knowledge and tried to spread it around the country, but some of these print shops were firebombed by the government. In the Nicaraguan Revolution of the 1970s, graffiti and street art became a way for the movement to express itself. In their art and posters, there was a picture of a little blue hat. According to MacPhee, that little blue hat has now become symbolic of the Nicaraguan resistance.

The sixth section was titled “Prefiguration: Marginal ideas often end up transforming our world.” One example of this is of the White Bicycle Plan of Amsterdam that was proposed by Luud Schimmelpenninck in the 1960s. It said that Amsterdam should produce white bikes that anyone could ride anywhere and leave it where they please, and anyone could then pick it up and ride it elsewhere. This community bicycle program was part of a movement for zero-carbon transportation. However, within the first month, many of the bicycles had been stolen or found by a nearby canal.

The last section was titled “Communication: Social movements try to harness the potential of all available communicative technologies.” MacPhee said that during the Civil Rights Movement, activists wanted to get bitten by dogs in order to get media coverage. A member of the audience seemed to dispute this and MacPhee restated his comment, and said that maybe they didn’t want to get bitten but they would purposely put themselves in situations that would be seen by those who had televisions. “Social movements have all different relations to media,” said MacPhee. He corroborated his statement with an introduction to an incident in Paris that occurred in Oct. 2003, where groups of people went into the subway station and by morning all of the advertisements had been destroyed. In the Institute for Applied Autonomy, Txtmob was created and protesters used it to get updates on what was going on. Txtmob was originally created for protesters of the Democratic National Convention and the Republican National Convention. Txtmob is now a mobile messaging service, still in use for sending messages to groups that belong to various topics.

The night concluded with many of the guests and the curators heading to the Miller Gallery in the Purnell Center for the Arts to view the exhibition. There were various posters from different eras on display along the walls of the gallery. The posters were of all colors, shapes, sizes, and creeds. Some had pictures, some were just words, but each of the posters told a different story and had a different meaningful contribution to the evolution of time and social interactions. MacPhee and Greenwald said that the selected pieces were ones that they felt were most important. They tried to come up with a balance of materials that would engage people and at the same time would be interesting in terms of historical context.

This exhibition has showed viewers all the different aspects of social change from different cultures and countries across the globe. There are various things that can be seen and interpreted from these images, posters, and videos, but it is up to those who are doing the viewing to derive meaning from these documents. During the question-and-answer section, an audience member asked what the ultimate goal of the collection of posters was, and MacPhee said that there were two answers: the Utopian answer is “total liberation and social transformation,” the real world answer is “just getting these things out of people’s basements.”