Singing on the streets of New York 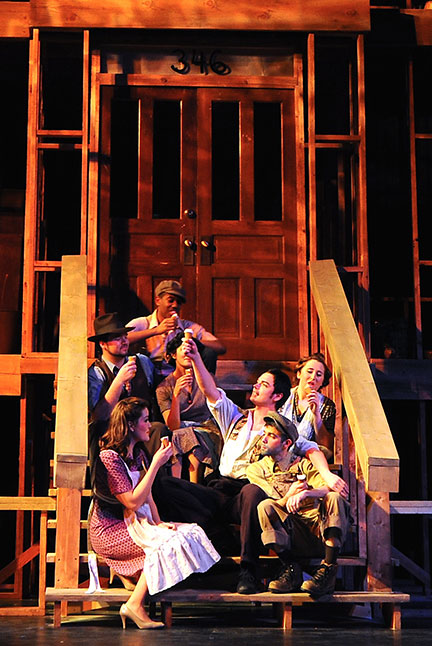 Street Scene, produced by the School of Music, is not your common opera. This 1947 show, with music by Kurt Weill, highlights the poetic and ponderous words of the great Langston Hughes as the drama unfolds on the street of a downtown New York tenement. The story is adapted from the Pulitzer Prize-winning play by Elmer Rice. It is a drama of love, hatred, and jealousy that leads to an explosive and surprising climax. The School of Music has put on a fine production of this classic opera that includes Wagnerian, blues, jazz, and barbershop quartet styles of music.

Particularly poignant is the singing and acting of Ian Alexander McEuen, a junior music major, who plays Sam Kaplan, a geeky but soul-searching young love interest to the beautiful and ill-fated Rose Maurrant (played by senior music major Danielle Messina). With a vocal range that could often be heard over the occasional overwhelming orchestra volume, McEuen managed to make his message of duality between a socially awkward but inwardly soul-baring young man clear. McEuen, aware of the difficulties of expressing this split persona on stage, explains that he can “relate to Sam’s need to express himself through singing and poetry ... [since] I got through [a difficult] part of my life by discovering music.”

Although the saga takes place in New York City, its themes are relevant to all of humanity. Anna Maurrant, Rose’s mother, is convincingly conveyed by senior English and music double major Kelly Rubinsohn. A woman who struggles with her husband and who has become hardened and argumentative over the years, Anna has a fateful affair with the milkman, Sankey (played by junior music major Scott Wasserman).

Through her resounding voice and determined acting, Rubinsohn manages to appear lost in her character’s strife as her gossiping neighbors begin to spread rumors of her iniquity. Rubinsohn’s number with her young stage son, Willie (played by Joel Neely), was one heart-pounding moment of expression and emotion. Singing about how she can’t wait for her son to grow up to be a respectable man, Rubinsohn manages to mold herself into the persona of a conflicted but nurturing woman. She acts marvelously as she vocally describes who she wants her son to become and what her husband can no longer be to her. This is urban poetry presented in a way only Hughes can passionately and lyrically express.

When Frank Maurrant, performed with an intense flame of anger by senior humanities and arts major Nathaniel Krause, comes across his wife and her lover, rage and jealousy burst forth from him. This climactic scene was well-rehearsed as it ran in a logically sequenced order without becoming silly, as overtly dramatic scenes can sometimes become. Krause, with a beautifully deep voice, contributed to the success of the climactic scene and production in general with his passionate stage presence and ability to always appear on the edge of emotionally snapping. Maurrant’s principles of working hard and maintaining a moral life and household are in his family’s best interest, but his inability to control his alcoholism and jealousy prove to be his tragic flaws.

With such a serious drama comes the need for some serious comic relief. This theatrical rescue came in the form of a barbershop quartet-style number about the wonderful taste of ice cream. Leading the operatic and harmonically pleasing number is the Italian immigrant to America, Lippo Fiorentino, played by senior music major Shawn Mlynek. During this ensemble piece, the orchestra and the singers were able to find a balanced dynamic with each other and literally left the audience craving some ice cream.

The dance routine between Dick McGann, played by junior music major Timothy Ruff, and Mae Jones, performed by senior music major Ashley Batten, was another enjoyable escape from the heavy storyline. This moment was also the highlight for the pit orchestra as they provided a big band-style swing number that was only enhanced by the choreography between Ruff and Batten.

With such timeless and human themes, Street Scene is as relevant today as it was in 1947. As McEuen states, “In Street Scene, resistance to change is presented almost as a tragic flaw. To view it in such a way is incredibly thought provoking in the present time ... as our country currently [is] going through an incredible change.” As McEuen has mentioned, change is truly an element necessary for peace and prosperity. The School of Music effectively expresses this sentiment through the thoughtful and dramatic production of a powerful American opera.