“The Silent Passage” no more 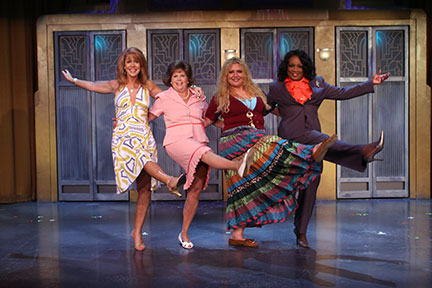 *Menopause The Musical* is a hilarious musical that touches on one the most momentous periods in a woman’s life. (credit: Courtesy of Veronica Corpuz)

Few would have thought it would be even remotely possible to write a 90-minute production about that crisis all women eventually have to go through — the period in a woman’s life commonly known as “The Change.”

But alas, it can be done, and rather brilliantly, too. “Four women at a lingerie sale with nothing in common but a black lace bra AND memory loss, hot flashes, night sweats and not enough sex, too much sex and more!” reads the synopsis of Menopause The Musical. In the play, a professional woman, a soap star, an earth mother, and a housewife from Iowa, all in the midst of menopause, meet in Bloomingdale’s. And for 90 minutes, the audience watches each of them go through the horrible ordeals of menopause. Horrible it may be for women in real life, but this musical’s goal is to turn menopause from “The Silent Passage” it has become into something that is known and talked about. They proclaim it is a perfectly natural passage that all women have to endure at some point, and at the same time, they raise issues concerning women’s health. Some of the proceeds from the show are donated toward research about ovarian cancer. The show has already raised $500,000 in its 2005-2006 tour.

The production is showing at the Byham Theater and is set entirely in Bloomingdale’s, with the action being played out between the four women alone. Staging wasn’t anything special or spectacular, but that certainly was not an issue, and by no means affected the overall production of the musical. In fact, such basic staging allowed for the audience to fully engage and appreciate the sheer hilarity and raw talent of Cynthia Jones (the professional woman), Cherie Price (the soap star), Ingrid Cole (the earth mother), and Carolynne Warren (the Iowan housewife). Sure, the script itself was funny, but it was, without a doubt, the talent of these women that really made the words come to life. From the reading of lines to the very, very funny facial expressions, little things turned a line’s worth from a giggle to a hearty, stomach-hurting, eye-watering laugh.

You can pretty much gather the tone of this particular musical as one that watches the womanly pains of hot flashes, memory loss, weight gain, wrinkles, and sagging. Another highlight is when “Puff the Magic Dragon” becomes “Puff My God, I’m Dragging!” as Warren drags herself across the stage in a fit of exhaustion, disgust, and disdain for her hanging flab and thunderous thighs.

Okay, so it’s maybe not one for the family, or the men, and it was pitiful to watch the handful of husbands and boyfriends who were dragged along by their enthusiastic wives and girlfriends. But it is definitely worth the watch for the female eye, regardless of age or experience with menopause.

Menopause The Musical is an extremely funny, fast-paced, upbeat production that has the entire audience in fits of laughter throughout.