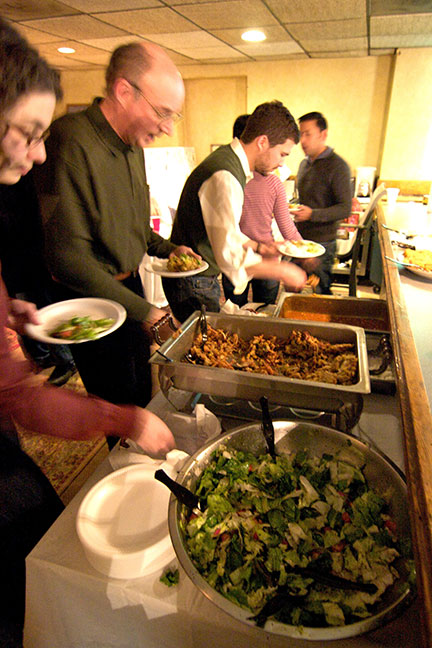 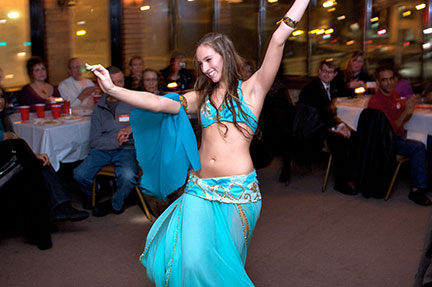 “Curry and Cumin: A Night of South East Asian Entertainment” was held last Friday night by Khalil’s restaurant on Baum Boulevard in Shadyside. Dalel Khalil, whose father originally bought the restaurant that has found a home in Oakland for nearly half a century, emceed the event, which featured a completely vegan buffet, an Indian dancer, Pakistani singing, and an exotic Middle Eastern belly dancer. And, needless to say, the “heat and flavor” brought to this event by the combination of so many different cultures was more than enough to guarantee a great evening for all who attended.

The food served at the restaurant encompasses all types of traditional Middle Eastern cuisine, and includes entrees like shish kabobs, lamb, and chicken. However, it is also a great stop for vegans and vegetarians as well. Upon arriving at Khalil’s, it was fairly obvious that the locale was not meant to handle the amount of people who had shown up for this festive event. The hospitality of the hosts was fantastic and the seating and greeting formalities took little time, despite the apparent overbooking of the event. Dalel Khalil recently wrote and published a book titled “From Veils to Thongs,” which offers a comedic yet practical look at balancing life with “one foot in the East and one in the West,” as Khalil put it. When asked about some reasons behind the multicultural event, Khalil said, “My family has always been very cultural and our mother especially taught us to be open to all cultures.”

One of the more unexpected experiences of the night involved the seating. A curtained-off area gave the appearance of cultural authenticity, until the guests were seated on the floor – due to the limited seats, the locale had become standing room only. A slight perturbance was the late start to the evening, which was scheduled to begin at 8 p.m. but didn’t actually start until about 8:40 p.m. This was explained by a fellow guest as living on “Indian time,” meaning things always run at least a half-hour late.

As most cultural events begin, food was served first. If the word vegan scares you away, this description should ease your fears. Appetizers of bread and hummus, and rice in grape leaves paved the way for the main buffet entrees of rice and sauce, fried veggies, salad, pumpkin kibi, and a delicious apple and crunchy noodle dish. The food was plentiful and despite what seemed to be an abundance of guests, they managed to never run out. The food was delicious, and even someone who is the furthest from being vegan would go back for seconds and thirds at the buffet.

Easily the most entertaining aspect of the night was the dancing. Two young women, one performing a traditional Indian folk dance and another who belly danced for what seemed like ages, held their audience entranced for much of the night. The dancing was heated and fierce, and it seemed as if the women made the music work for them. They were truly the highlight of the night and the dancing continued well into the evening as people kept wanting more.

On a more personal level, a break was brought to the evening’s festivities for Kamana Mathur, an immigration attorney who is founding a magazine titled The Pittsburgh Immigrant, which will focus on cultural happenings of all kinds in the city and is set to debut in March. In her address to the crowd, she explained, “I wanted to do something similar to what I did overseas ... helping communication between areas where there was little interaction.”

Overall, “Curry and Cumin” definitely gave more than it was expected to deliver. The food, entertainment, guests, and overall atmosphere of Khalil’s were all excellent. Khalil’s is conveniently located just a short walk down Morewood Avenue at 4757 Baum Blvd.