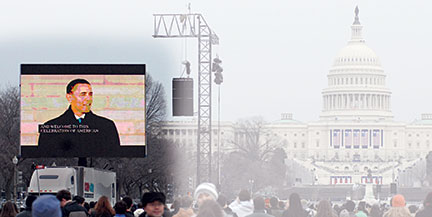 For some, Tuesday’s presidential inauguration served as this generation’s version of a political Woodstock — only bigger, colder, and with less nudity (blame the weather). But temperatures of 30 degrees could not freeze the spirits of the crowd of 2 million who were present at the Capitol building, or as close as they could get, some of whom who had been waiting outside for nearly 24 hours, according to a Jan. 22 article in the Detroit Free Press.

The event has been deemed the largest gathering of people in North American history to date. An additional 38 million people watched the live televised broadcast, according to Yahoo! News. Washington did everything it could to maximize security measures and prepare for the crowds, which some news sources predicted could number up to 5 million, including installing several large television screens on which attendees could watch the proceedings and lining the mall with quantities of port-a-potties that regular outdoor concert-goers only dream about.

And 300 miles away in Pittsburgh, Carnegie Mellon students were able to witness history in the making, live, in three on-campus locations — Philip Chosky Theater in the Purnell Center, Alumni Concert Hall in CFA, and McConomy Auditorium in the University Center. In addition, the day’s proceedings were replayed in McConomy at 7 p.m. for all those who missed them the first time around.

“It was amazing, beyond words ... to describe the feeling that overcame me when it was announced that Barack Obama was now the president of the United States of America,” said first-year CIT student Elisha Clayton, who watched the ceremony on the projector in Purnell. “It was overwhelming, unbelievable, shocking, astonishing, pleasing, satisfying, extraordinary, history in the making.”

“While watching [Obama] take the oath, I felt proud that we have overcome in the sense that America as a whole could vote for someone that wasn’t a white male. For once we actually stand by our beliefs in America being an equal opportunity country,” said sophomore drama major Donovan Mitchell, who also watched the proceedings from the Philip Chosky Theater in Purnell.

In addition to those students on campus, a group of students in the Heinz College who are currently participating in the school’s Apprentice Program in Washington, D.C. this semester were able to attend the event.
“I felt very blessed to be alive at this point in history and physically here in D.C. at this time,” said Mark Rutledge, a Heinz master’s student in public policy and management who is participating in the program. “President Obama has proven that he can speak to the heart of every American’s hopes and dreams for themselves and their society. I truly believe that he will show that not only can he speak to those hopes and dreams, but can change our government to be a reliable partner with us as we make our hopes and dreams our everyday realities.”

Marie Coleman, executive director of the Heinz College’s Washington, D.C. office, said that she felt fortunate that the Heinz students could be present for the inauguration and to witness the shift in presidential administrations. “You can’t get a better learning experience,” Coleman stated via e-mail.

Appropriately, the inauguration fell the day after Martin Luther King Jr. Day, serving as a reminder to many of where the country has been and how far we have come. However, students also cautioned that the fight for equal rights is not over.

“I feel that Dr. King’s vision has come true, but we still have a ways to go. Obama being president was only the first; we have no clue if he will also be the last,” Mitchell said.

“Although 40 years later, after King stood on the mountaintop and delivered his ‘I Have A Dream’ speech, Obama has become the first African American in the White House to become president, that does not mean the dream has been fulfilled,” Clayton added. “We are still dreaming, yet the difference is that now we are seeing more of our dreams become reality.”

While he’s been in office for scarcely a week, Obama has already made some decisions that have set the tone for his administration. Internally, he has made a motion to increase transparency in government and has already frozen salaries in the White House. Externally, he has signed the first of four documents to close the prison at Guantanamo Bay in less than a year and reversed the Bush administration’s ban on giving federal funds to international women’s health organizations that perform abortions.

Coleman agreed that Obama has helped the country realize the dream of Martin Luther King Jr., but also that it is Obama’s individual gifts that will allow him to be a successful leader in the future.

“Beyond being the first African American president, I think that Obama has a way of reaching out to many more types of people, [and] that is probably what made him an effective candidate,” Coleman said. “He is half black, but also half white, of a foreign-born parent, lived abroad ... there are so many ways people can relate to him. He is also an effective communicator and has a way of engaging and bringing people together.”