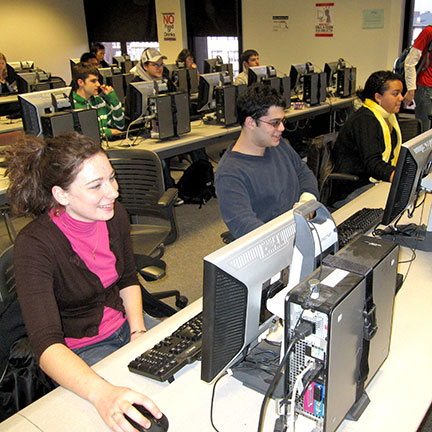 Students might notice a sharp decrease in minority student presence on campus if a ban on affirmative action were to be established. (credit: Photo Staff)

A recent study published by professors Richard Roman, Dennis Epple, and Holger Sieg at the Tepper School of Business shows that a universal ban on affirmative action would decrease minority presence by 35 percent at top-tier colleges and universities like Carnegie Mellon.

“In recent years, court decisions have limited discretion of colleges to pursue affirmative action policies. In addition, several states have imposed restrictions on use of affirmative action. Our objective was to investigate what effect such restrictions would have on financial aid policies and on the racial composition of colleges and universities,” explained Epple.

The model looked at both admissions and financial aid policies to examine specifically the role affirmative action plays in building a minority presence at a particular school.

“We predict that the effects of a ban on affirmative action would be a substantial reduction in minority enrollment at the top tier of colleges and universities and an increase in minority enrollment in lower tier institutions,” concluded Epple. “The latter result at first appears surprising, but it is a consequence of the reduced access of minority students to top tier institutions.”

While its supporters believe it is needed to help minorities overcome ethnic barriers, its critics argue it detracts from the significance of other academic merits and achievements.

In an ideal world, affirmative action would neither be needed nor permitted.

As our results show, however, an outright ban on affirmative action is likely to result in a significant reduction in attendance by minority students in top-tier colleges and universities.”

However, Epple insists that his study was not intended to contribute to any side of the debate. “The broader implications for society ... is a subject of much research and debate, but it is not the question that our study was designed to answer.”

Nevertheless, some students take issue with the implications the study seems to make on the qualifications of many currently enrolled undergraduates.

“Maybe this percentage is true, and we’ll see the effects if and when affirmative action is repealed,” said first-year biological sciences major Turi Alcoser, who identifies as Mexican-American.

“I have a righteous mind that is capable of solving the same math equations or physics problems as any other Carnegie Mellon student.

It would be a shame to attribute my enrollment on the sole basis of affirmative action, and I wouldn’t feel any different four years from now when I’m receiving my diploma.”

But regardless of any perceived magnitude of affirmative action’s role in admission and financial aid, minority students currently make up on average 14 percent of the student bodies at the top-tier colleges and universities, and Carnegie Mellon has a 10 percent minority undergraduate enrollment.

President Jared Cohon has indicated his support for increasing diversity across campus in his annual diversity advisory report, saying, “community success and diversity have remained as university priorities, reaffirming our commitment to create an inclusive, rewarding, and collaborative environment that enables all of us to reach our fullest potential while advancing the university’s mission and values.”

Epple also remains hopeful, saying, “Carnegie Mellon has been a leader and innovator in developing and employing objective criteria for admission and financial aid decisions that support the mission of the university. I expect that the university will now play a similar role in developing procedures to apply the criterion of holistic review in a sensible way.”