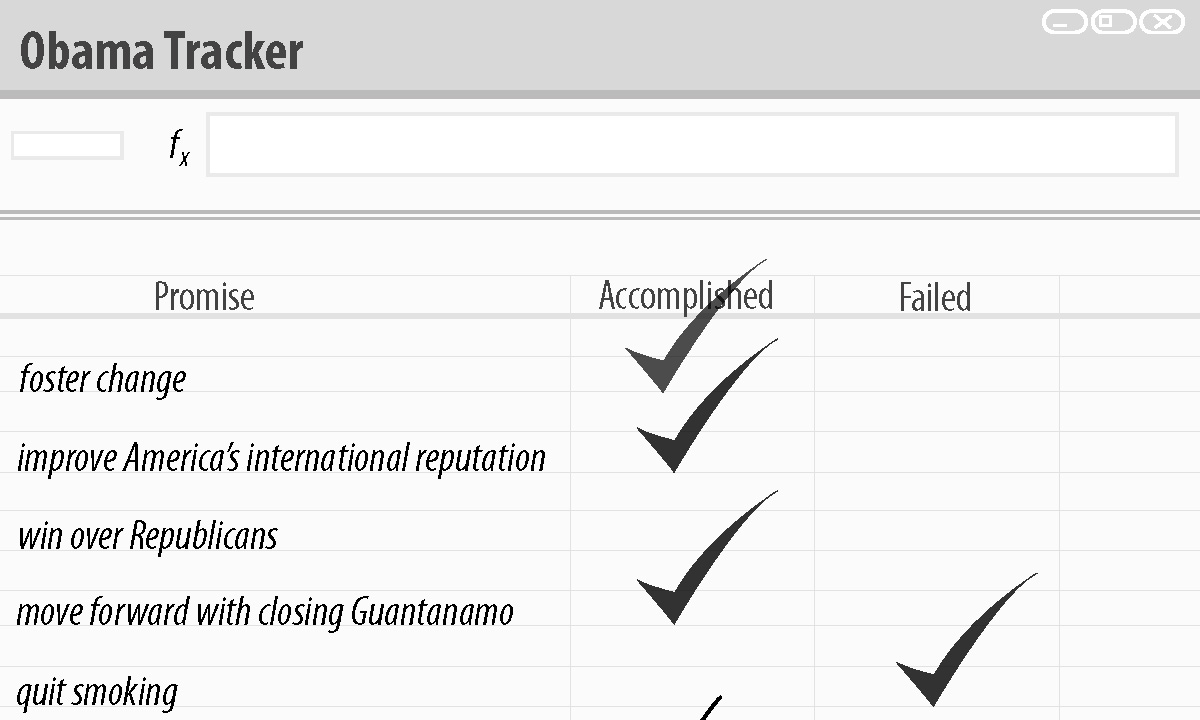 Politicians make a lot of promises during their campaigns. Out of a desire to be elected, they promise to lower taxes, improve education, reduce crime, or improve the economy. These promises — and the winners who don’t keep them — have become commonplace in American politics.

Part of the reason that politicians are able to get away with not fulfilling their promises is that people can’t keep track of the promises candidates make. If people don’t remember the promises, then the politicians are off the hook. Barack Obama, however, might not be so lucky.

An Ideapalooza.com user has created a web page called the Barack Obama Promise Tracker. The creator painstakingly scoured all of Obama’s speeches and campaign plans to find all of his campaign promises — and he found them. All 895 of them.

The Promise Tracker divides Obama’s promises into 37 different categories ranging from “First Day” promises to “Health Care” and “Foreign Policy” promises. Categories usually have subcategories within them, like “Administrative” and “Funding.”

Users of the Promise Tracker can check boxes next to each promise once they believe Obama has either broken or kept it. Once a box is checked, the total tally and percentage of kept and broken promises is updated, allowing the user to keep track of how well Obama is doing.

Throughout Obama’s campaign, the issue of technology has been important and is often discussed as a sign of the changing times. In this case, too, we can see the positive impact of technology on the presidency specifically and politics in general.

The Promise Tracker is a great tool that allows Americans to hold politicians to their word. It allows Obama to be held accountable for all of his promises.

On the main page of the Promise Tracker, which is a macro-enabled Excel document, the author’s note reads: “This is meant to be an objective means of measuring the candidate’s sincerity and honesty.... This is early proof that this may indeed be the beginning of an era of new openness.”

I think that here the creator is correct. A lot of good can come of being able to hold Obama — and future politicians — accountable for the promises made while campaigning. Too often, politicians make empty promises to garner votes, and once elected, those promises take a backseat to the politician’s real agenda.

With the Promise Tracker, though, Americans can keep a close watch on all of the campaign promises and hold Obama accountable for each and every one made. These promises did, after all, get him elected, and he owes it to the American people to at least attempt to fulfill every one.

This may help to change the ways in which American politics operates. If politicians are going to be held accountable for all of their promises, maybe they’ll be more careful about how many they make. Then, we’ll be able to judge the worth of the candidates without false promises swaying our opinions.

As the Promise Tracker’s author said, this could be the beginning of a new period in American politics, one in which politicians are honest and open about their actions. If Obama seriously attempts to fulfill his promises, then maybe it will be proof that the American people chose the right man for the job; if he doesn’t, then maybe Americans will be more careful in the next election.

Aside from the Promise Tracker, there are many other places to check on the state of Obama’s campaign promises. Various websites are keeping track of them, and by some counts he’s already kept more than 10, an impressive feat for his first week.

While it remains to be seen whether Obama will fulfill the rest of his promises, it is clear that he’s off to a good start. It is unclear at this point whether Obama will be able to fulfill every promise, though; he only has four years, and there are pressing issues in this country that are more important than some of the promises he made during his campaign.

This presidency will be very important in setting the tone for the future. This is the first time that so many resources have been available to keep an eye on what the president is doing and whether he was sincere in his campaigning. Future presidential hopefuls may be scrutinized more closely during their campaigns, and campaigns may be more focused on plans for the future rather than on bashing the other candidate.

Regardless of whether Obama does keep his promises, the Promise Tracker will only do good things for American politics, allowing the American people to hold their politicians accountable for what they say and choose candidates based on the issues instead of false promises.