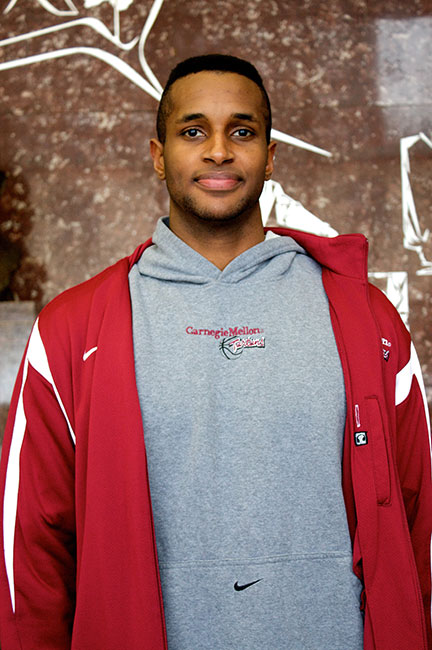 As a noteworthy member of the Carnegie Mellon men’s basketball team, senior Terrance Bouldin-Johnson stays involved with the sports community in other ways than just varsity competition. He shows his dedication to the athletics programs through his responsibilities with intramural sports and as an avid sideline worker for home soccer matches in the fall.

Bouldin-Johnson gave The Tartan some insight into the playing, dining, and personal hairstyling aspects of his college life while in the midst of his senior season with the Tartans.

The Tartan: While each University Athletic Association (UAA) game is as intense as the one before it, are there any conference match-ups coming up that you are particularly excited to play?
Bouldin-Johson: I just look forward to the next game. I try not to look too far down the line so that I don’t lose focus on what I have to do to help us win the next one.

T: What has been your favorite place that you have eaten while on the road traveling as a team, and while here in Pittsburgh?
B: Tough one. I would say it is a tie between Grandlux Café in Chicago and Fire and Ice in Boston for team trips. When it comes to the ‘burgh, my tops are Fiori’s (pizza), New China Inn (Chinese), Tessaro’s (burgers), Fatheads (signature sandwiches), and Pizza Perfectta (hoagies).

T: What has been the best part about senior year so far? Is there anything left that you are still hoping to do before you graduate?
B: The best part of this year for me was spending winter break in Pittsburgh with all of my teammates. I just hope to help the team win as many games as possible before I graduate.

T: If you could own any kind of car, what type would you own and why?
B: I look forward to riding my bike and taking the train to work when I graduate and hardly ever using a car. That being said, I would take the Batmobile from The Dark Knight, but only the motorcycle version in order to reduce my carbon footprint.

T: What do you enjoy most, and least, about the Tepper School of Business?
B: The one thing I enjoy the most about Tepper is getting graded on presentations. It’s like cheating: You just decide what you are going to say and look good while you do it, and bang, you get an A. The biggest downfall of being in Tepper would be the tremendous workload.

T: You’ve been sporting some pretty original hairstyles the past couple of seasons. Is there any inspiration behind them?
B: Let me break it down. I let my hair grow for about three months and then I tell my teammate Elliot [Curtis] I need a haircut. I simply wear his masterpieces.

T: Did you have a basketball idol while you were growing up? If you could be compared to any player, who would it be?
B: My uncle was my only basketball idol when I was younger because I have never really followed the sport outside of playing it myself. As far as players to be compared to, I would call myself a rich man’s Mittens.

The Tartans hit the hardwood next at Lycoming College this Tuesday, followed by a men’s and women’s UAA double-header weekend at Skibo Gymnasium with match-ups against the University of Chicago on Friday and Washington University in St. Louis on Sunday.