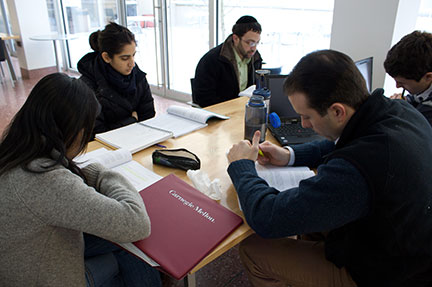 Participants of the BYOB Idea Competition compete for the chance to start their business. (credit: Travis Wolfe/Photo Staff)

Participants submitted business proposals and were interviewed, and the top five presented in front of a panel of judges featuring Lauren Weinstein, academic adviser for the Tepper School of Business; Robert Culbertson, professor of entrepreneurship; and Gordon Vanscoy, a junior business administration major who won the BYOB Idea Competition two years ago. The winning student will get a chance to work with Project BYOB over this spring semester in order to implement his or her idea.

This BYOB event was sponsored by Infosys Technologies, a global leader in the “next generation” of IT and consulting with revenues of over $4 billion,
alongside InStep, their global internship program for undergraduate, graduate, MBA, and Ph.D. students.
The Idea Competition resulted in an extremely close call between Joshua Kresge, a junior business administration student, with his idea of Rebate Rabbit, and Abhinav Gautam, a first-year computer science major, with his idea of iCampus. Kresge won the competition by one point, but SIFE decided to work with both Kresge and Gautam. Their ideas will be implemented this semester.

The judges mentioned that “Kresge had an advantage owing to his presentation and prior experience.” This was reflected in the way he went about Rebate Rabbit, which Kresge explained “is a portal site for the web-hosting industry. It is the perfect solution for both web hosts and web-hosting customers. The concept of RebateRabbit.com is simple: Consumers who are looking to create a website need to find the web host that is right for them.”

When asked about the scope of such a business, Kresge said, “It is a highly competitive market that no one company really dominates.

Some estimates from the web hosts we currently deal with are as high as 20,000 new customers a month. This market will continue to grow exponentially for as long as the Internet is around.”

He mentions that he would start with one application, iChalk, and then build more around it.

Gautam explained, “iChalk is an application that will bring all Carnegie Mellon events to the user on their iPhone. It should have a complimentary website where student organizations, academic departments, and other organizations can upload their event information for free.”

Users can run the application to automatically download all the events.

They will then have the option to delete and save their favorite events, and even export their events to other calendars.

Yamna Khan and Swati Gupta, both first-year CIT majors, proposed the idea of a handicrafts store that would import and sell Asian goods at a reasonable price.

Even though they did not win, both Gupta explained that, “BYOB caught our attention, since as a freshman engineer we don’t really get to be entrepreneurial. It was a truly invigorating experience and we got to learn a lot from it.”

The Idea Competition promoted the spirit of entrepreneurship in the Carnegie Mellon community. “There is definitely a need for entrepreneurship in the Carnegie Mellon community,” Vanscoy said. “It is a great asset to people not just from business administration, but for people from all majors. The BYOB Idea Competition is an initiative which encourages people to come forward with their ideas and learn some important skills at the same time.”

For more information or questions about how to get involved with the BYOB team, send an e-mail to CMUProjectBYOB@gmail.com.