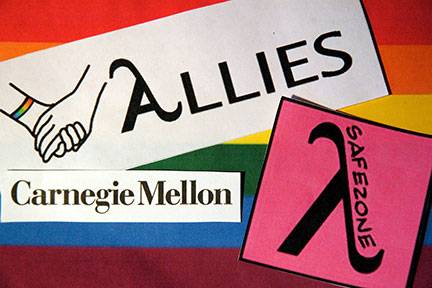 ALLIES provides a safe haven for those who suffer from discrimination. (credit: Kristen Severson/Photo Editor)

The issue of gay rights has been the subject of debate for several decades and has spun off into different arenas including marriage and the military.

Actions of student groups like ALLIES take the position that, according to ALLIES president and electrical and computer engineering junior Jordan Rubenstein, it is essential to “promote tolerance and prevent discrimination through various programming.”

A recent piece of legislation considered by the Human Relations Commission of Allegheny County seems to suggest increasing support for the rights of lesbian, gay, bisexual, and transgender (LGBT) individuals by including clauses which assure that all individuals, “regardless of ... gender identity or sexual orientation” be afforded “equal opportunities for employment, housing and use of public accommodation facilities.”

With the passing of this legislation, the county would be adopting the anti-discriminatory laws that seem commonplace within the city limits of Pittsburgh. Many students, including sophomore materials science major Youngeun Kim, believe that this is a step in the right direction.

Kim stated that “everyone should be treated equally regardless of their race, gender, or sexual orientation.” However, the reaction of the American Family Association (AFA) of Pennsylvania, an organization based on traditional Judeo-Christian values, demonstrates a counterview expressed by many religious conservative groups.

In an action alert sent out to residents of Allegheny County by e-mail, the AFA urges citizens to “call your County Council member and ask him or her not to support the formation of a County Human Relations Commission or changes in the county non-discrimination laws” because of its inclusion of protection for LGBT individuals.

The group’s opposition to the ordinance is one of the more recent developments in a series of lobbying efforts and boycotts against companies who show “support of the homosexual agenda including same-sex marriage,” according to the AFA of Pennsylvania’s webpage.

In the past, this has included boycotts against McDonald’s for using their corporate power and money to support “the gay agenda” and against Hallmark for the sale of gay wedding and coming-out cards.

However, as Rubenstein points out, there are many different cards, “including those made by Hallmark, for those who entered into a heterosexual marriage.” She maintains that the support shown by these companies for gay rights should not instigate such an extreme reaction from the AFA because “same-sex marriage would in no way make heterosexual marriages less valid or valuable” and would not diminish the significance of traditional families, which the AFA claims to “encourage, promote, and defend.”

The AFA states on its website that the group’s main concern is that gay rights legislation will detract from their ability to voice their religious beliefs concerning the inappropriateness of the homosexual lifestyle. Matthew D. Staver, the founder and chairman of Liberty Counsel and Dean of Liberty University School of Law, commented in a Dec. 30 news report that “whenever a right is granted to same-sex unions, then a right is taken from religious liberty and freedom of speech.”

Rubenstein brings up the counterpoint that “restricting freedom to homosexuals does not protect heterosexuals; it only hurts those who are facing discrimination.”

The participation of the ALLIES group in activities like Coming Out Day, World AIDS Day, and the Day of Silence are all designed to promote tolerance throughout campus. The possibility of the passing of a human relations ordinance in Allegheny County could further improve opportunities for the LGBT community, yet, from the standpoint of the AFA of Pennsylvania, dampen the freedom of speech and belief for many religious conservatives.