With old Scaife Hall demolished, construction begins on its replacement 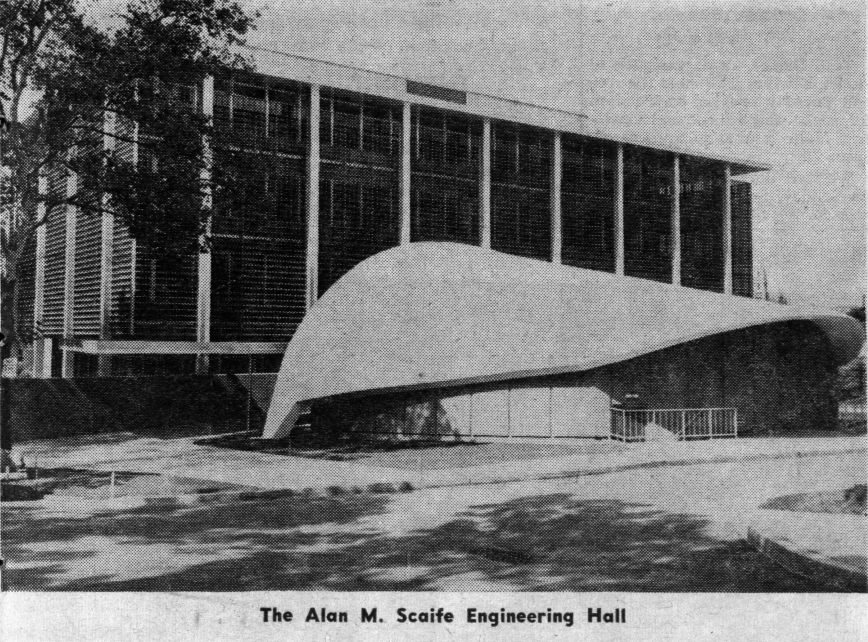 A freshly build Alan M. Scaife Engineering Hall in Sept. of 1962. The site is now razed, and construction has begun on a New Scaife Hall, set to be built by 2023. (credit: From The Tartan Archives)

Encased in a cage of lattice aluminum strips, Scaife Hall’s appearance was unique. A partially-underground lecture hall with a curved roof, referred to by many as the “Pringle,” or the “chip,” protruded from the building’s rectangular frame. To some, Scaife was a rare example of a building that was as ugly to look at as it was to look out from. To those with a soft spot for mid-century modern quirk, the building had charm.

When Alan M. Scaife Hall opened in the fall of 1962, it boasted several modern features. It had air conditioning. The basement housed Carnegie Tech’s nuclear engineering lab. The top floor held a newly constructed version of the school’s already famed computation center. Scaife Hall came as part of a $29 million, 10-year development program that resulted in other campus fixtures like Hunt Library and Skibo Gymnasium.

At the building’s October 1962 dedication, former Mellon Institute President Edward Weidlein expressed excitement in the building’s “outstanding modern facilities.” In a comment to The Tartan, then-University President John Warner said that the building “will enable Carnegie to keep pace with the enormous advances and changes taking place in engineering and the sciences.”

Though Scaife Hall may have been revolutionary in 1962, and perhaps also a mid-century architectural gem, by 2018, the engineering department had outgrown it. A replacement building was announced by University President Farnam Janahian in his 2018 inaugural address, funded partially by a $30 million grant from the Allegheny Foundation, a subsidiary of Scaife Foundations. In his address, Jahanian aired that because of this new facility, much like the original, Carnegie Mellon “will be better able to compete for the best students and faculty, driving Pittsburgh’s reputation as a hub for innovation.” The building’s total cost is expected to be $75 million.

The project is now well underway. Old Scaife Hall’s demolition is complete, and construction has officially begun on what is called New Scaife Hall.

The new building promises to be as groundbreaking as its predecessor was in 1962 ー a university release touts “technology-rich labs; modern, flexible classrooms; and spaces that facilitate formal and informal collaborations.” The new facility will be twice as large, spilling two stories down into Junction Hollow. The university hopes that New Scaife will “encourage the development of novel areas of research,” and foster the College of Engineering’s “culture of Advanced Collaboration®” (a phrase the university trademarked in 2019).

Construction of New Scaife is expected to fully conclude in March of 2023 according to Jennifer McDowell, the university’s director of design and construction. In a written response to The Tartan, McDowell stated that the building is set to have classrooms ready for instruction by the Fall semester of 2023.

Expanding the facility’s footprint two-fold in the same location requires some creativity. “The biggest physical challenge is the hillside dropping into Junction Hollow,” McDowell said, as the new building’s design “requires the installation of a number of earth-retaining structures to allow the bulk excavation to begin.” Current mockups of the building have it partitioned roughly in three, with a large rectangular cornerstone overhanging the drop off, a portal entrance that almost connects to Porter Hall, and a courtyard. Like its predecessor, the building will shade the sun with aluminum fins, but this time, no cage.

Regarding construction during the COVID-19 pandemic, McDowell stated that all “Contractors are required to have procedures and working rules in place to limit exposure between workers on site, in addition to members of our campus community.” She says that the university and its contractors are fully complying with “all laws and regulations, including Governor Wolf’s guidelines and the City of Pittsburgh PLI External Guidelines for Construction.”

McDowell, cutting through the nostalgia, said that “While the chip was an interesting feature of old Scaife, it was not a particularly efficient space for teaching and learning needs.” Still, she says, there is “much excitement for honoring and restoring the Scaife site as a significant campus entry and a destination for all of campus.”

A live view of the Scaife construction site can be seen at the College of Engineering’s official stream.