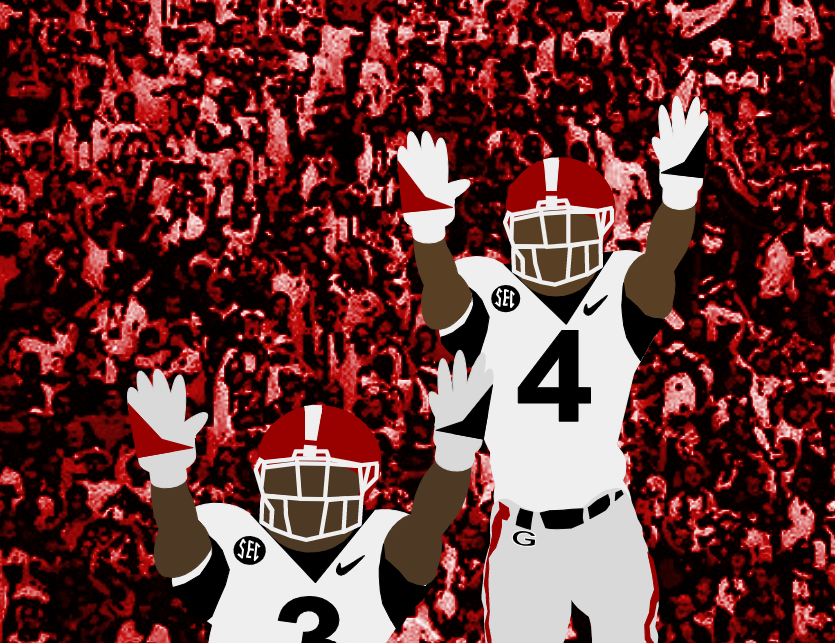 In a blowout game against Florida, the Georgia Bulldogs won 34-7 to remain undefeated this season. (credit: Cynthia Xu/Sports Editor) 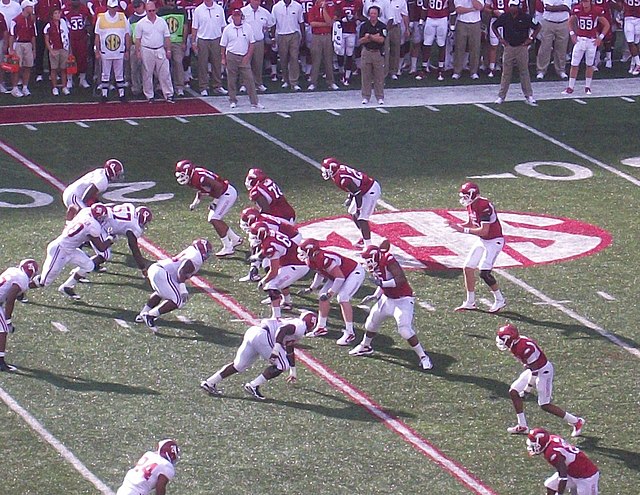 Despite a loss to Texas A&M earlier this month, Alabama still has a very real shot at making the playoffs. (credit: Photo courtesy of Brandonrush via Wikimedia Commons)

There’s no other way to put it: Week 9 lived up to all the hype. In the first week of the massive Big Ten games, Michigan State continued their climb up the rankings, beating Michigan, who tumbled out of the Top Ten. Ohio State continued their roll to the playoffs and cemented the #3 spot by knocking off Penn State, handing the Nittany Lions their third consecutive loss.

In East Lansing, the name of the game was turnovers. Michigan took a 30-14 lead, but first-year quarterback JJ McCarthy fumbled twice to allow the Spartans to claw back for a 37-33 win. In Columbus, Penn State and Ohio State traded scores all night long, but at the end of the day, it was a tale of two field goals — Noah Ruggles barely hit a 27-yarder for Ohio State and Jordan Stout missed a 49-yarder to seal the Buckeyes’ 33-24 win over Penn State.

1 Georgia maintained their top spot by crushing Florida on the road, 34-7. The Bulldogs have four games left, none against ranked opponents, and a game in hand against second-place Kentucky in the SEC East. Going undefeated through the regular season has never looked likelier for Georgia, who are in a prime position to make the playoffs, even if they lose the SEC Championship.

Alabama, at #2, had a bye week, but with only four games to go — and only one against a ranked opponent, #18 Auburn — the Crimson Tide appear to be barreling right for an SEC Championship matchup against #1 Georgia. The only thing holding Alabama’s chances back is their one loss, picked up at Texas A&M. Tied in the division standings with both Ole Miss and Auburn, a loss would stick them with two conference losses. This could be a deal breaker, taking them out of the championship game and out of the playoff hunt. That said, if they win out, Alabama should be fine.

3 Ohio State is next, having earned a big win at home against Penn State, who is now at 5-3. The Buckeyes appear to be rolling with what’s arguably the best offense in the nation, and the loss to #7 Oregon is now far off in the rearview mirror. With the gift of Michigan’s loss to Michigan State, all the Buckeyes have to do now is knock off the Spartans in Week 12 to lock up the division and meet Iowa in the Big Ten Championship.

Next is #4 Michigan State, who flew up the rankings after edging out #8 Michigan, 37-33, in an instant-classic game. The 8-0 Spartans now lead the Big Ten East and, against all the odds, a game between Michigan State and Ohio State in Week 12 looks like it could be decisive. The Spartans, playing in the hardest division in college football, finally have a big win to show that they are for real.

While the top four now form a relatively obvious top tier, a second tier has formed below it, ready to jump in if one of the teams in the top four takes a loss. #5 Cincinnati and #6 Oklahoma, still undefeated, sit right under MSU, but with too many close wins and no strong victories between them; #7 Oregon is still going steady after their loss to Stanford, but not good enough to overcome it; #8 Michigan dipped in the rankings after the Michigan State loss; #9 Wake Forest crushed Duke 45-7 to give the ACC a representative in the Top Ten for the first time since Clemson fell out early in the season; and #10 Auburn knocked off Ole Miss to return to the Top Ten.

No Top Ten teams play ranked opponents next week, so Week 10 should be a bit of a down week. Expect the Top Ten to run the board, or close to it, next week, and for Week 11 to bring more upsets.

The playoff picture, though, is beginning to come into view after the first day of Big Ten East juggernauts playing each other. After Michigan State’s home win over Michigan, and Ohio State holding off Penn State in a thriller, the Buckeyes and Spartans are looking like playoff contenders, while Michigan, with one conference loss, is in a harder spot. Penn State, with three conference losses, is basically out. Over in the SEC, Alabama and Georgia have both been playing great football, and no matter which team ultimately prevails in the SEC Championship, both could end up in the playoffs. As of now, although Cincinnati and Oklahoma maintain a good shot, the top four have sorted themselves out.