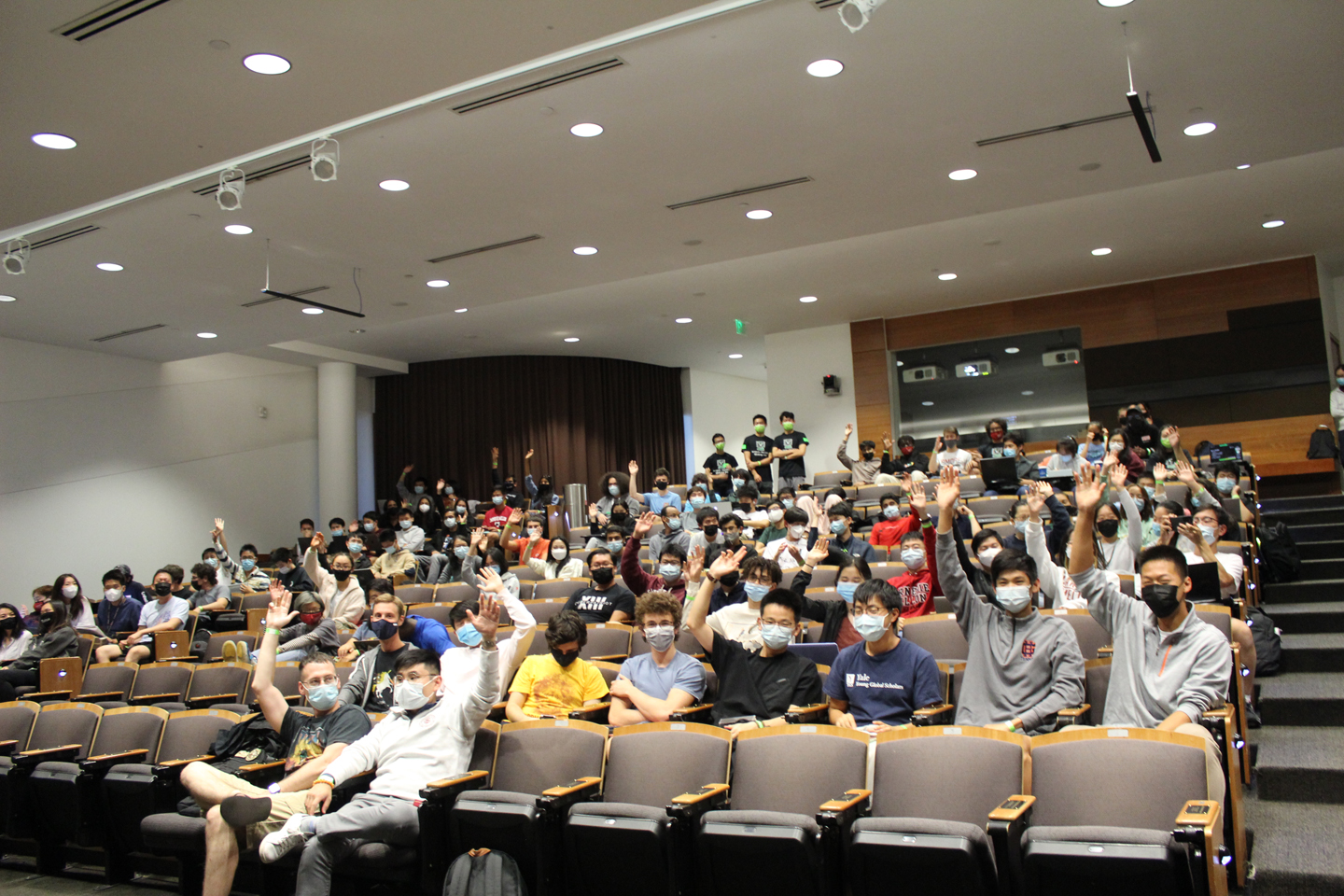 Despite having a limit on in-person participants, HackCMU’s ratio of submissions to registrations was higher than ever. (credit: Courtesy of ACM@CMU)

HackCMU was hosted both in-person and remotely last weekend from Oct. 1 through Oct. 3 by Carnegie Mellon’s chapter of Association for Computing Machinery (ACM), featuring prizes, beginner-friendly tech talks, meet-and-greets with sponsors, and lots of free food.

HackCMU is hosted annually during the fall semester, but, like many other hackathons, it went online last year. This year, the team at ACM was happy for the event to be back in person. While COVID-19 restrictions limited in-person attendance to 150 participants, the HackCMU organizers tried to make sure that remote students could participate as well. Registrants past the 150 limit were put onto a “waitlist,” in which they could still submit projects remotely to HackCMU’s Devpost. Organizers also monitored who of the initial 150 were unable to attend, admitting people off the waitlist whenever other participants dropped out.
“Even if you’re on the waitlist, [participants] can still hack virtually, but obviously that’s going to discourage people, so that was definitely a challenge,” said Michelle Zhu, ACM@CMU’s treasurer, webmaster, and one of the main organizers of the event. “Throughout the past few days, I’ve been furiously monitoring the waitlist, and as soon as someone is like, ‘Oh I actually can’t come,’ I try to get people off the waitlist as quickly as possible. We’re just trying to maximize this experience for everyone, but obviously right now with COVID that’s not completely possible.”

HackCMU also presented challenges that would apply to any hackathon, COVID-19 restrictions or not. One challenge was communication, as students in hackathons do not always stay in one place, and they often leave and come back to the main rooms when talks are available. Hackathon organizers tried to keep participants updated by sending regular communication through email and messaging apps like Discord.

HackCMU also struggled with submission rates in the past. Many of the students who register are beginners, and the event is hosted in the middle of the fall, so students have not yet been exposed to all of their content in computer-science related courses. The hackathon offered beginners many tech talks explaining technologies like React.js and Node.js, but it was difficult for them to grasp how to build a full-fledged app or piece of software in the limited time of a hackathon.

“The challenge at the beginning was figuring out how we would want to present it and implement it,” said Maggie Cai, who was part of a team of beginners called Rags to Riches. Cai’s teammate Jesse Ding added, “I definitely want to go out of my comfort zone next time to do something more technical [...] I don’t think it was feasible for us in 24 hours to learn, and actually implement our idea into one of the [popular technologies] like React or Node or stuff like that, so I think that’s something that we want to work on next time probably.”

The hackathon also took place during a midterm week, which took up some hackers’ time. “I was originally going to drop out because it’s midterm season so I want to study for stuff, but I’m glad I came. I really enjoyed it. The tech talks and just talking to people in general is really fun and interesting,” Cai said.

Despite some setbacks, both new and old, the team at ACM was satisfied with how the event went. The winners built applications predicting COVID-19 hotspots at dining locations, finding safer routes to destinations, and creating knowledge maps as an alternative to more linearly-structured documents. HackCMU also received a record proportion of submissions to registrations this year after implementing a new system where those who submitted were entered into a raffle system for prizes such as a giant teddy bear and free merchandise.
“We’re really happy that this year we actually had such great turnout,” Zhu said. “We were pretty surprised because we thought we definitely advertised a little bit later this year. And obviously COVID restriction still applied, and we had a waitlist, [...] but we still got up to almost 300 [registrants] so we were very, very happy that it all came together like this.”