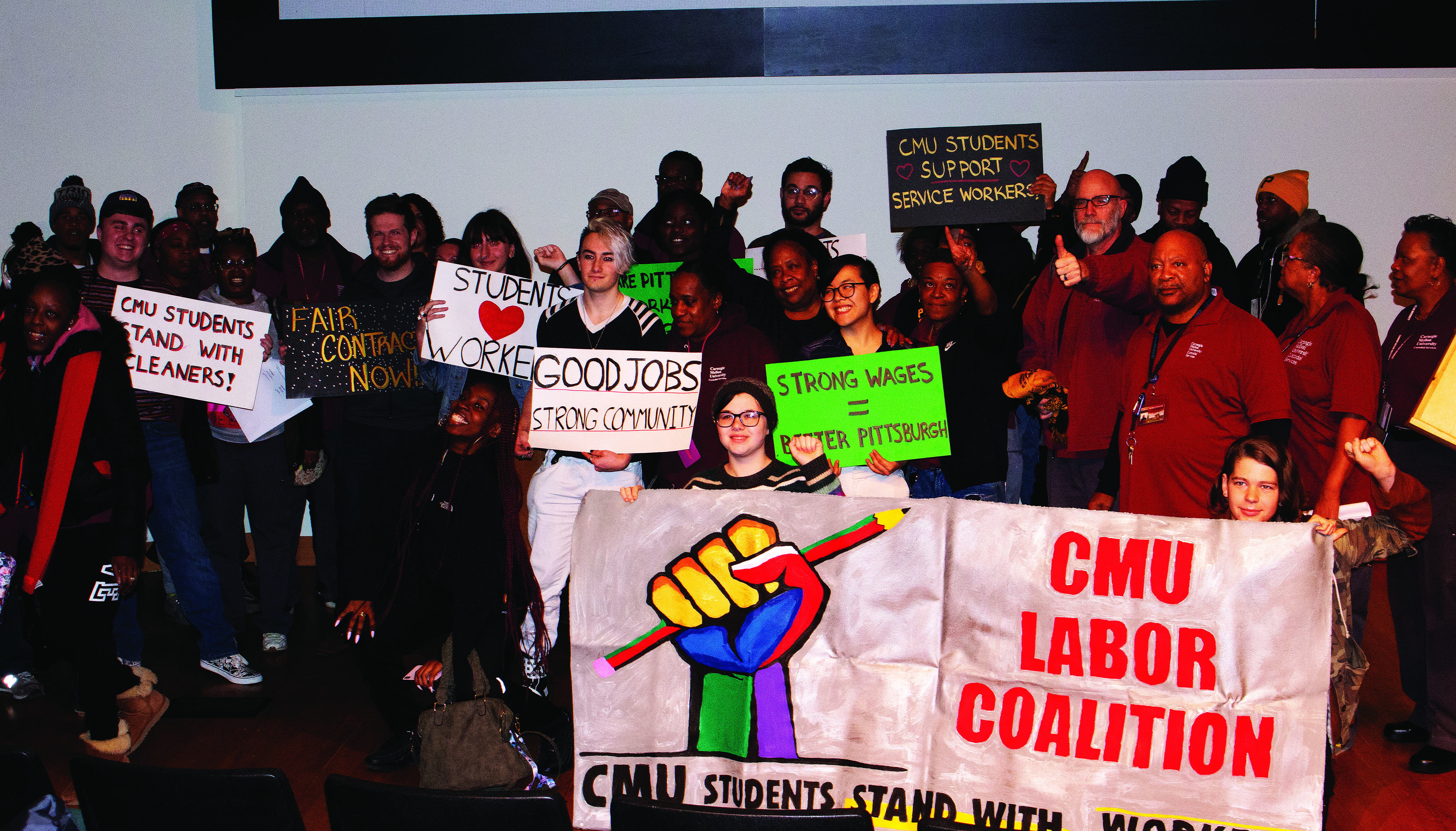 The ratification vote took place in the Cohon Center’s McConomy Auditorium this past Friday. In the large lecture hall, spirits were high as custodial staff, many in their maroon uniform jackets, filed in. Towards the front of the auditorium sat a group of students with the CMU Labor Coalition, a campus organization that aims to support Carnegie Mellon employees.

Presiding over the event was Sam Williamson, district director of the Western Pennsylvania 32BJ SEIU union that represents Carnegie Mellon’s custodial staff. He opened the event with a thanks to the CMU Labor Coalition, who he said helped “set the tone from day one” regarding contract negotiation with Aramark. He referred to the coalition’s actions in November of last year, when members of the coalition marched into the open bargaining sessions with Aramark demanding a fair contract.

Williamson introduced Margot Stewart, an undergraduate computer science student and member of the coalition, to address the crowd. “Our coalition will continue to have the backs of workers,” Stewart said to applause, “we will not tolerate mistreatment.” She concluded, “when workers unite, and when workers and students unite, we win.”

The new ratified contract established several changes to the existing one. At the vote, Williamson ran through each change, taking questions as he went. One of the biggest changes is a new wage increase structure that will require a 50 cent wage increase each year for three years, starting in 2021. For 2020, custodial workers will receive a 45 cent per hour raise, and they will get back pay for time they’ve already worked this year.

Job classifications have also been amended by the new contract. The contract introduces a new role of “lead”. Leads are not supervisors or bosses, but will be promoted from within to organize work, and receive higher pay. The job description is forthcoming. In the previous contract, “extras” filled in when people took off on vacation or during short-term vacancies. Now, Williamson explained, Aramark has agreed to simplify job classifications. All former “extras” have part time status, which means they can receive time off proportional to hours worked.

Holiday work assignments have also been amended. Full-time employees can no longer be assigned to work on holidays, and the work will now be classified as overtime. If holiday work needs to be assigned, it will be assigned by inverse seniority, meaning new employees will be called in before more senior employees.

The contract also incorporates new language about sexual harassment complaints. Williamson stated that complaints will now be easier to process, and that Aramark has agreed to investigate claims, even when complaints are against employees or staff members not contracted by the company. The contract also mandates more information sharing with those that file a complaint.

Williamson noted that the new contract makes no concessions on workers’ existing insurance and pension plans with Aramark. According to him, however, this isn’t something Aramark is doing “out of the goodness of their heart.” “They’re scared of you,” Williamson said to the custodial staff sitting about McConomy. Turning to the coalition of students seated at the front, “and they’re scared of you.”

At the time of publishing, Aramark was unable to be reached for comment on this article.