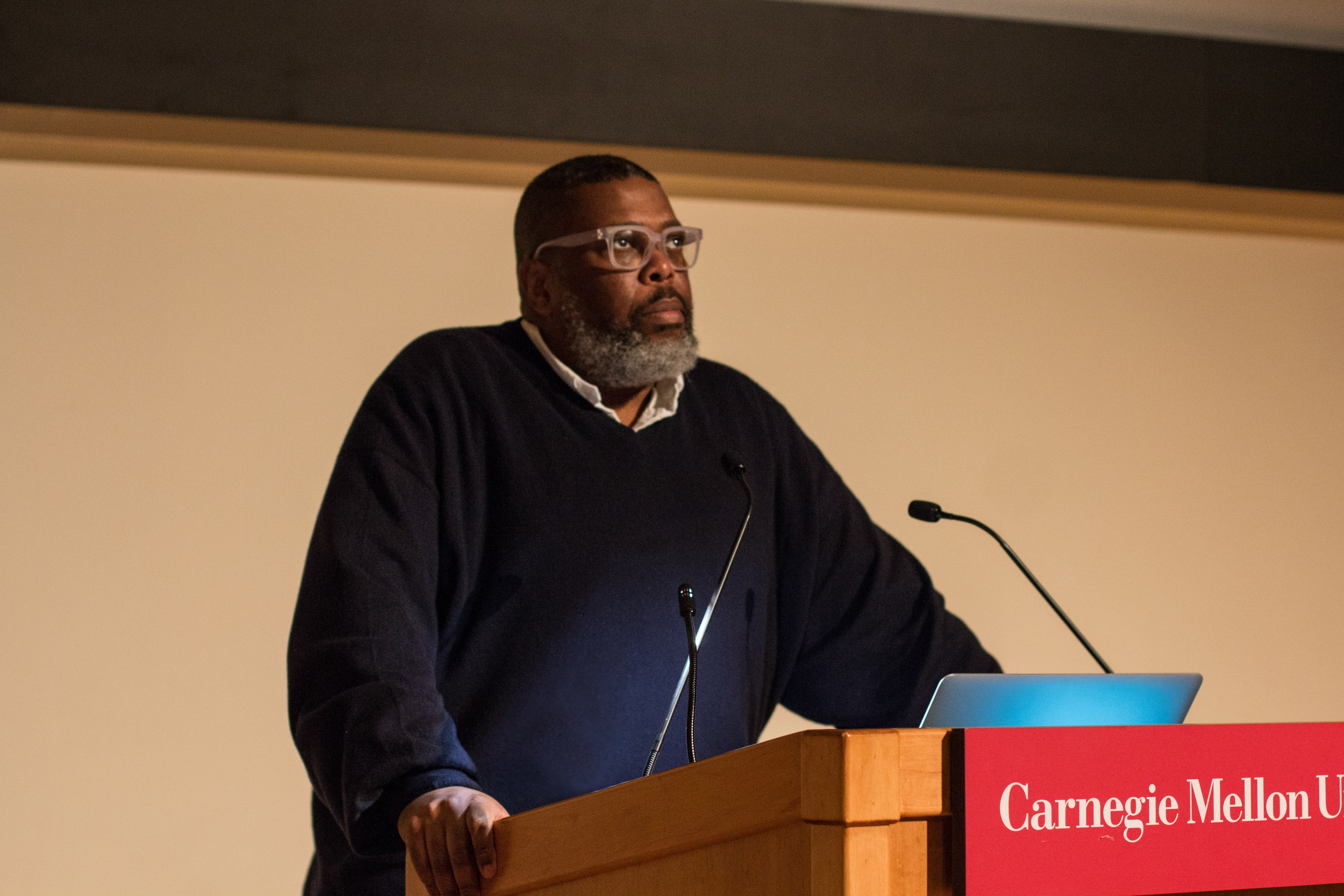 Hilton Als isn’t “happy to be black.” The Pulitzer Prize-winning critic, writer, and curator isn’t one to reduce his multifaceted racial, sexual, or personal identity into simplified emotional terms. Calling himself “happy” to be gay or black, he said, would be to “disregard the existence of pain,” to succumb to the prevailing “political fashion dictated by the needs of the powerful.”

Als began his Feb. 18 lecture in Carnegie Mellon’s McConomy Auditorium with a story. During a museum visit, he received what he called the dreaded “I’m happy to be black” response upon asking a curator how she was. “I couldn’t walk through the museum saying ‘I’m happy to be black’ because I’m a target,” he told an audience of students, professors, and Pittsburgh locals.

Throughout his lecture, titled “Just Us: Considering Art in the Age of ‘Wokeness,’” Hilton Als explored racial identity and ‘wokeness’ in the artistic sphere. Als’ lecture was the School of Art’s Robert L. Lepper Distinguished Lecture in Creative Inquiry, an annual event held as part of the School of Art’s lecture series.

The curator’s declaration of black happiness seemed to Als as too much of a performative, literal expression. This type of performative identity has become a major problem in art, Als argued. As a result, he said, art has become a “landscape littered with artifacts that express the literate.”

In such a landscape, Als claimed, black artists are often expected to perform blackness for the sake of a white audience. “The role of the ‘politically-aware exotic’ is in fashion,” Als said, citing the desire of white audiences to observe ‘woke’ black artwork.

Als explained that this also impacts white artists who wish to “respond to the American story,” a story that heavily features racism, he said. Als cited Dana Schutz’s “Open Casket,” a painting of Emmett Till’s body after he had been beaten to death on the accusation of him flirting with a white woman. The piece garnered controversy because it was painted by a white woman.

While Als does not appreciate “Open Casket” aesthetically, claiming that it is just “an okay piece,” he argued that it was not deserving of the controversy it had garnered. He referenced other white artists who have depicted blackness and done so respectfully, including photographer Diane Arbus. Through her photographs of interracial couples, Arbus “described miscegenation with such clarity,” according to Als.

Als closed his lecture with an appeal to the complicated, often painful, identities of creators. Als asked, “Isn’t what we share… the diversity of our complications?”

During a question and answer section, he tackled audience questions on a broad range of topics from the Harlem Renaissance to his public persona. The audience erupted in laughter after Als revealed his distaste for poor table manners — he channels his mother when a person he takes to dinner eats before Als gets his meal. “We’re better than our bad manners,” Als said.

Als also clarified his stance on the role of identity within art, explaining that he does not want artists to be reduced to just their salient identities. Als said, “I just want everything that you are. You are everything. Do everything!”

Als has enjoyed a prolific career as a Pulitzer Prize-winning writer, theatre critic, art curator, and writing professor at Columbia University. However, Als claimed to be so divorced from his public persona that, when he catches a stranger staring, he instinctively believes it is because he is attractive. When said stranger approaches him to compliment his work, Als is disappointed. On his public self, Als remarked, “I don’t know who he is.”

The next School of Art Lecture Series event will be given by Johannes DeYoung, Feb. 25, 2020.