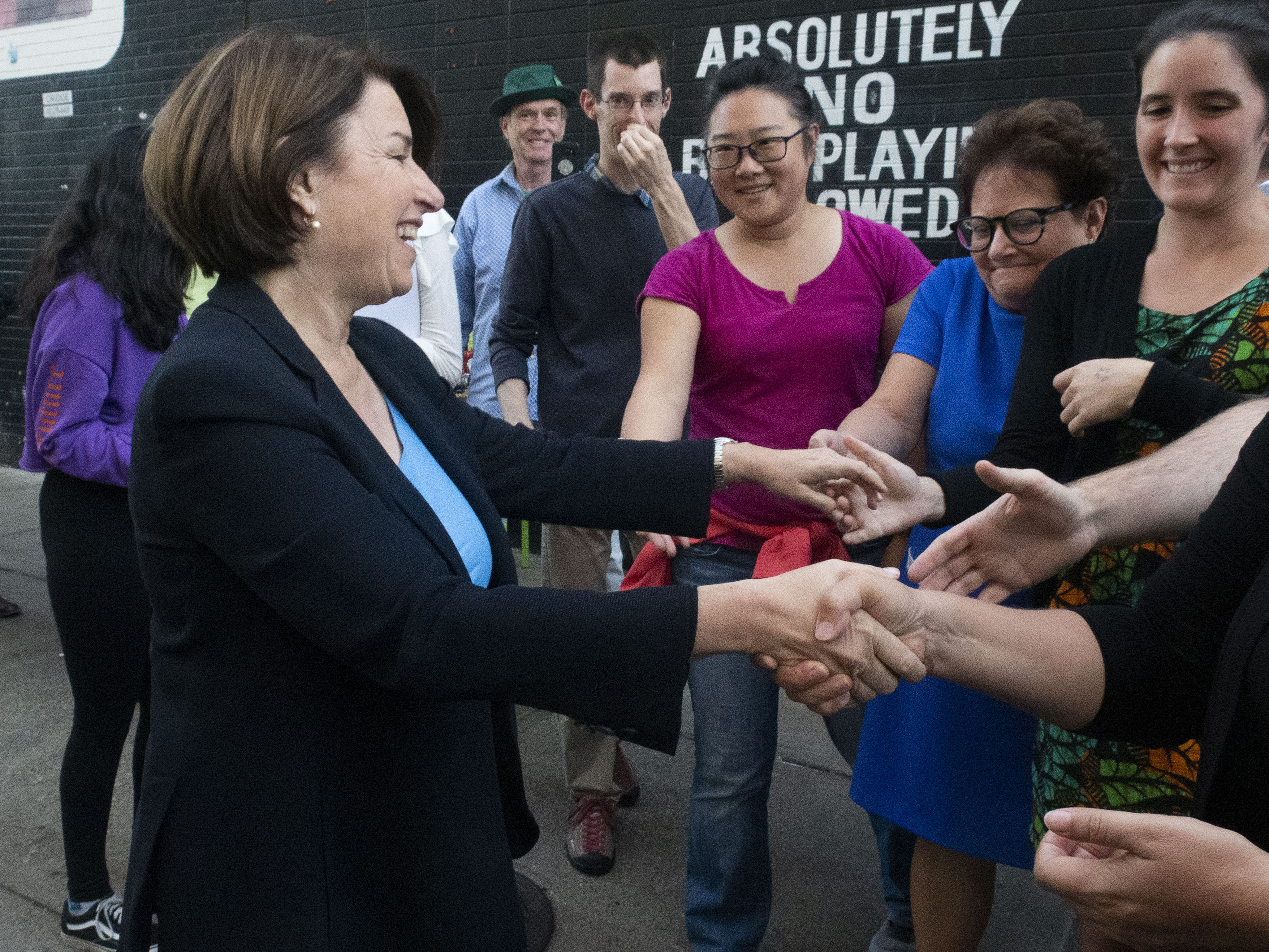 On Wednesday, Senator Amy Klobuchar, a candidate running for the Democratic nomination in the 2020 Presidential election, spoke at Stack’d Oakland, a popular hamburger restaurant and bar right near the University of Pittsburgh campus.

Over 500 people attended Klobuchar’s event on Wednesday, according to Klobuchar’s campaign. The venue reached maximum capacity and a large crowd spilled onto Oakland Avenue.

Some attendees were big fans of Klobuchar, while others were there to see what she’s all about. 2020 will be the first election that Delany Hernich, a freshman at the University of Pittsburgh, votes in. Henrich said that she wants “to be as informed as [she] can about different candidates.”

Klobuchar arrived in a black SUV, waving to the crowd, and then walked over to shake a few hands. “I have to greet the people!” she said.

Senator Klobuchar is running as a moderate. While she is aligned with most Democratic candidates on issues of immigration, abortion and LGBTQ+ rights, she is trying to cast herself as more realistic than other candidates, which is appealing to her supporters.

“I just like that she’s so bipartisan, like she’s going for the moderate vote,” said Serena Fisher, a senior at Fox Chapel Academy. Fisher was at Wednesday’s event with her friend, Suparna Agrawal, who also likes Klobuchar, despite the fact that she won’t be able to vote. “I know a ton of people are running progressive... but also they’re not necessarily going to get things done in government,” said Agrawal.

Klobuchar plans to address the problem of student debt by allowing students to refinance their loans and making Pell grants more available. She opposes free 4-year college for all, an idea also being pushed by candidates Elizabeth Warren and Bernie Sanders. “If I was a magic genie and could give that to everyone and afford it, I would,” Klobuchar said in a televised CNN town hall in February.

She wants to expand Medicare to include Americans aged 55 and older and favors universal healthcare coverage. Klobuchar has expressed opposition to eliminating private health insurance under Medicare for All. In a Democratic debate, she touted, “I don’t think that’s a bold idea, I think that’s a bad idea.”

“She’s a moderate progressive and I think that’s what we need now,” said Beth McCracken, a Pittsburgh resident, on Wednesday. McCracken has wanted Klobuchar to run for office since she was elected to the Senate in 2006. “I think she’s a brilliant woman. I think she would really represent the majority of the country.”

Klobuchar’s stop in Pittsburgh was part of her “Blue Wave” campaign tour, in which she campaigned in Pennsylvania, Michigan, and Wisconsin, three states which voted for Donald Trump in the 2016 election.

Senator Klobuchar says that they are states that Democrats should have won, as they voted for Democrats in the four elections that preceded 2016. Trump won in Pennsylvania, Michigan and Wisconsin by a small margin, but they played decisive roles in his victory.

Galen Druke, a host of FiveThirtyEight’s political podcast, described Pennsylvania as “the state that could very well decide the 2020 Presidential election.” In a July episode of the podcast, Druke said, “If the race is close, Pennsylvania will be key.”

Klobuchar believes that they will play a key role in 2020. “We’re building this blue wall, and we’re gonna make Donald Trump pay for it,” said Klobuchar in her speech.