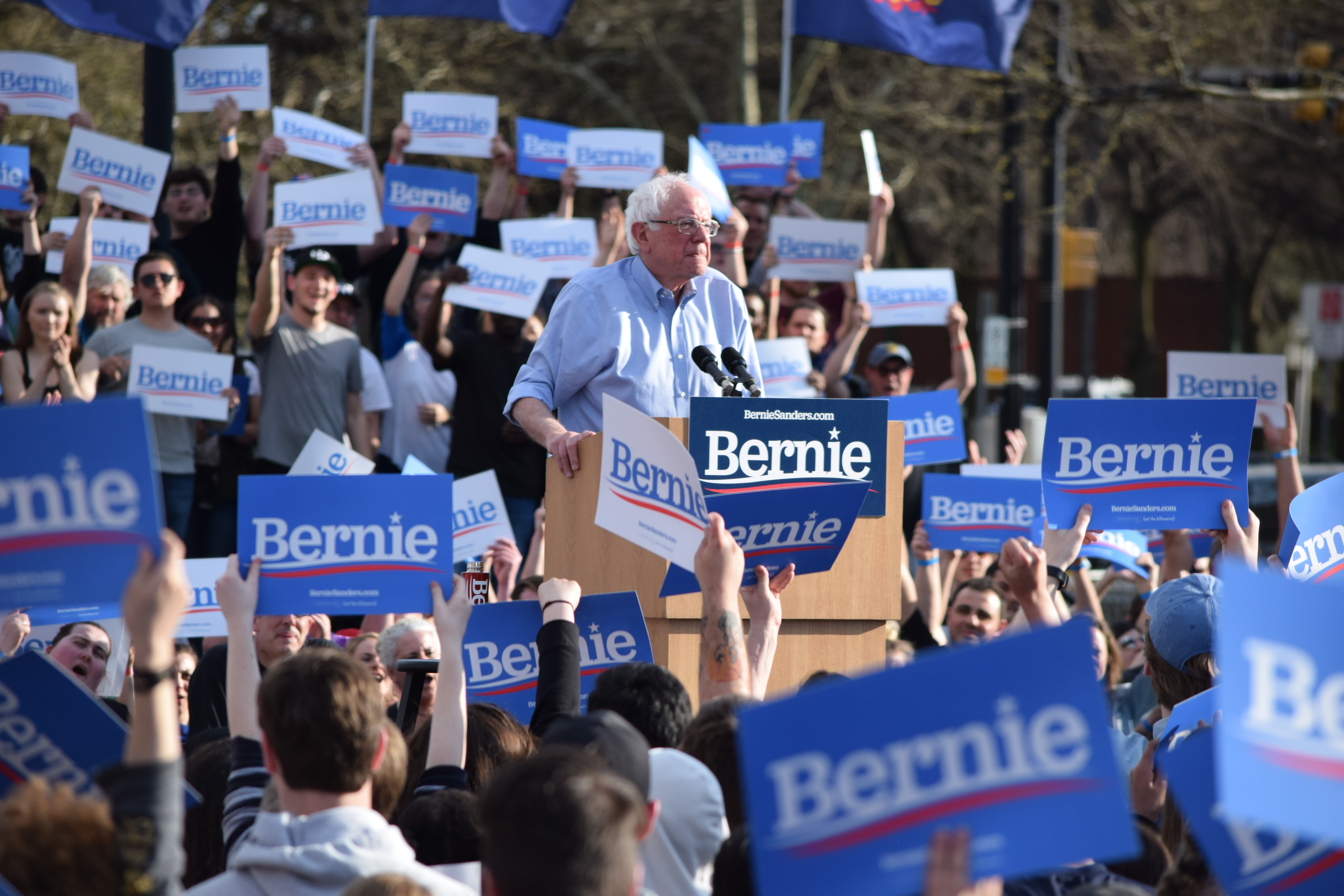 On Sunday, April 14, over Carnival weekend, independent Senator and 2020 Democratic presidential candidate Bernie Sanders held a campaign rally in Pittsburgh’s Schenley Plaza. Pittsburgh was one of several stops Sanders made on his swing through the Midwest, a decisive region in the upcoming general election.

A long lineup of speakers warmed up the crowd before Sanders took the stage. There was the mayor of San Juan, Puerto Rico, and Heinz College alum Carmen Yulin Cruz-Soto (MSPPM ‘86), one of the four national co-chairs of the Sanders campaign. She started by calling out the president, reminding the crowd of his neglect in the days after Hurricane Maria hit Puerto Rico. She said that Trump “made sure that the people who needed help didn’t get help” and that one can “kill people with a gun or kill people with neglect.”

Cruz said that because of Trump’s failure to get his job done, 3,000 people died in Puerto Rico, citing the number found by an investigation conducted by George Washington University. She used this to draw a contrast between Trump and Sanders, whom she commended as a leader who would get the job done. She specifically praised Sanders’ consistency on supporting the causes he does today, such as empowering unions, because it is the right thing to do and not because of political convenience. “[Sanders] just cares if your heart is in the right place,” and not about your race, religion, gender, or sexual orientation, Cruz stated.

The last in the lineup was the star of the event — Sanders. Sanders called out the president for being a “pathological liar” and the “most dangerous president in modern history,” and used the first part of his speech to call out the many contradictions between Trump’s previous campaign promises and the policies he actually enacted. Trump had campaigned on standing up for working families and taking on the establishment, a promise Sanders called out as a “monstrous lie,” giving many examples where he believed Trump had failed to stand up for the working class. Sanders cited Trump’s claim that he would guarantee healthcare to everyone, which contradicted Trump’s push for legislation—referring to the GOP push to undo the Affordable Care Act—that would throw 32 million people off their insurance, undo guarantees for coverage of preexisting conditions, and undo the requirement that children could stay on their parents’ insurance policies until age 26.

Sanders also cited Trump’s assertion that he would not benefit from the tax reforms he passed, which was opposite to numerous outlets’ reports that most of the benefits actually went to the wealthy rather than the working class. The senator cited other inconsistencies between Trump’s comments on the campaign trail and actions during his presidency, including reducing the trade deficit, reducing the outsourcing of jobs to other countries, and not cutting Social Security and Medicare.

Sanders took the opportunity to remind the crowd of rising inequality in th United States. For example, Sanders stated, some large corporations such as Amazon get away with paying little or no federal taxes despite their massive profits, and it is typical for company CEOs to make hundreds or even a thousand times more than the average worker at the company. Meanwhile, he continues, as kindergarten teachers have to take money out of their own, limited salaries to purchase supplies for their classrooms, the top 25 wealthiest hedge fund managers make double the profits of all kindergarten teachers combined.

He reminded the crowd that Americans spend twice as much per capita on healthcare as people of other nations, putting one in five Americans in financial straits so dire that they can’t afford to fill their prescriptions. Sanders also talked about an issue the majority of Americans face — living paycheck to paycheck, an issue made painfully clear during the government shutdown earlier this year. In a wealthy country like ours, Sanders maintained, “millions should not be [living] in desperate economic conditions,” and that it isn’t right that despite an “explosion” in worker productivity, today’s generation will have a lower standard of living than their parents.

He called for an end to this kind of system, which he said also includes ending racial injustice in all its forms, including insidious and less detectable forms such as redlining, underfunded inner-city schools, and the fact that African-Americans are less able to get loans for businesses. “This campaign is about moving people up, not down,” Sanders declared.

Sanders outlined policies that he wanted to be able to put into place. These include a 15 dollar an hour federal minimum wage, bolstering the right for workers to unionize and join unions, a trade policy that will work for ordinary Americans and not just CEOs, making public universities tuition free, and measures to ease the burden of student debt. “[We can] reduce student debt if Trump and his friends can get a tax break,” Sanders asserted. He also outlined rules he wanted to see implemented for companies bidding for federal contracts, specifically rules that prohibited them from outsourcing jobs and mandating that they treat workers well.

The senator also discussed the corruption in the political and election system — in particular, the outsized influence of the wealthy in the electoral process. Sanders called for an end to the superdelegate system in the Democratic Party that he believed was undemocratic. He railed against the Citizens United decision, which allows unlimited donations through super PAC organizations, letting billionaires buy elections, and called for a return to the ideal of “one person, one vote.” “I know that’s a radical idea,” he said sarcastically, to laughs from the audience. To reduce the influence of the ultra-rich on elections, he called for public funding of elections. He also called out the GOP for being “so afraid of free and fair elections” that they want to make it harder for young people and minorities to vote, and called for an end to such voter suppression measures.

Sanders concluded by reflecting how far the nation has come since 2016 and how far we still have to go. He talked about how few took him and his candidacy seriously in 2016 but now many of his ideas are mainstream Democratic party talking points. He remembered how, when he said that climate change was a major national security threat during the 2016 campaign, people had laughed, but now people are taking it more seriously than ever. “Change always comes from the bottom up,” he said, citing the history of the women’s rights movement and the LGBTQ movement as examples.

Before the rally, Mayor Cruz spoke briefly with The Tartan. “I know from experience, unfortunately, that when times are tough you have two choices: you stand up [to try to turn injustice into justice], or you stand down,” Cruz said of her decision to become a co-chair for the campaign. She called the current time a “pivotal point” and said that the next election is important for our country and the world. Cruz cited her support for Sanders’ prioritization of healthcare and education as “a right not a privilege,” and his desire to hold corporations accountable. As to why she chose Sanders over the many other candidates gearing up for the nomination, she asserted: “Bernie has been fighting for these issues long before they were politically correct, or even before they seemed sexy to people ... he knows what it feels like to be out there and he will get it done.” As an example, she said that Sanders was supportive of Puerto Rico before and during Hurricanes Irma and Maria.

For the students at Carnegie Mellon and other community members who were unable to attend the rally, she had a simple message: become engaged in politics. “This thing about politics not being for young people — that’s not true,” she insisted. In this crucial time for our nation, she offers an inspirational call to action for the student community: “as Carnegie Mellon University students of all walks of life, you have a choice: to transcend and to help history transform itself. Take it. Go out there and change the world. Do it one vote at a time.”