What goes into scoring for diving? 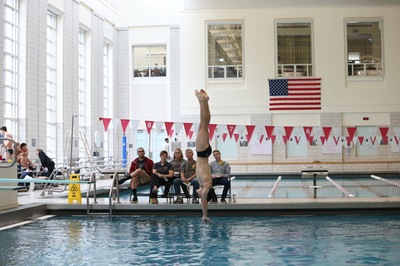 When I started springboard diving eight years ago, I had the same attitude about the sport as any beginner would: I just wanted to get better. I wanted to do more flips, make smaller splashes on my entries, improve my toe-point, deepen my hamstring flexibility, and, in general, be a more graceful person. I stretched at home, did ab workouts, and even attended ballet classes for a few months, imagining my future self gliding down the diving board with elegant, hyperextended legs and perfect posture.

Over the years I made nearly all of those improvements, except for the elegant legs. I’ve competed at the national level in high school and college, and have been around thousands of other divers, both in the pool and out. It’s a sport based on aesthetics, so you tend to notice the visuals.

I gradually saw other divers who just looked better than me in the air, and at some point accepted that my physiology was such that I would never look that good. I never questioned what exactly it was that separated them from me, or why it mattered. I just knew we were different, and that they had better diving bodies.

The ugly details of this mindset and the tradition that allowed it to happen didn’t become apparent until a year ago, at a pre-championship practice. My teammate absolutely crushed a dive much better than he usually does, and my coach responded by saying “Great dive! Probably a seven.” She didn’t offer any criticism because it was so much better than his previous attempts at the same dive that night. I congratulated him when he got out of the water, but he was frustrated by the fact that she hadn’t given him any feedback.

“If it’s not a ten, I want to know what I can do to make it a ten,” he said as if that were obvious. I realized at that moment that I had become too passive in my relationship to diving scoring. The fact that it wasn’t obvious to me just goes to show how deeply ingrained my assumptions behind scoring had become. Without realizing it, I had allowed a dichotomy to form in my brain among divers: those who looked, walked, and moved like “real divers,” and those who didn’t. There were no specific criteria for these labels, but I unconsciously categorized people after watching them dive three or four times.

In my mind, it went without saying that my teammate and I were among the latter group, for similar but not the same reasons. For the rest of practice, I thought about what might help him get a ten. Some of those things were innocent enough — albeit long-term investments — like better toe-point and more “flourish” during transitional parts of the dive. Both of those apply to me as well.

Other things were more problematic: while he wasn’t overweight by any measure, perhaps if his belly was smaller, or his butt didn’t stick out so much, he could get higher scores. Finally, based on years of being scored and watching other divers be scored, I realized that his hair — his awesome, nonwhite, kinky hair which he hadn’t cut since the seventh grade — might have been preventing him from getting that perfect ten.

What does hair have to do with how well somebody is able to perform a dive? It doesn’t. It has to do with anglo-centric beauty norms and the way those norms sneak into judging criteria.

Competitive springboard diving is regulated by FINA, the world’s largest aquatic sports governing body. Nearly every national diving organization across the globe derives its rulebook in some way or another from the FINA diving manual, which devotes an entire section to judging bias. The organization makes its values clear in this section:
“Biased judging is an offense against the concept of sportsmanship and fair competition.” In this section, FINA thoroughly addresses both conscious and subconscious bias, concluding by urging judges to ask themselves “Am I judging the dive or the diver? Am I judging what I see or what I expect to see?”

The same manual also stipulates that judges should award a dive based on their “overall impression” of it, and uses phrases like “aesthetically pleasing,” “ungraceful,” and “awkward” to detail point deductions. Given the 10-second timeframe in which judges are expected to score a dive, vague terms like these become subject to the viewer’s instincts. And if, as it appears, many judges associate “aesthetically pleasing” with short hair and more slender features, they will probably deduct some points simply for looking different.

I’ve been in diving long enough to know that subjectivity is a part of it and that, in some cases, it allows people with truly unique styles to be rewarded for their artistry. But the language of judging needs to change to either eliminate the vagueness or explicitly prohibit judging based on cosmetics. There shouldn’t be systematic barriers to getting that perfect ten.