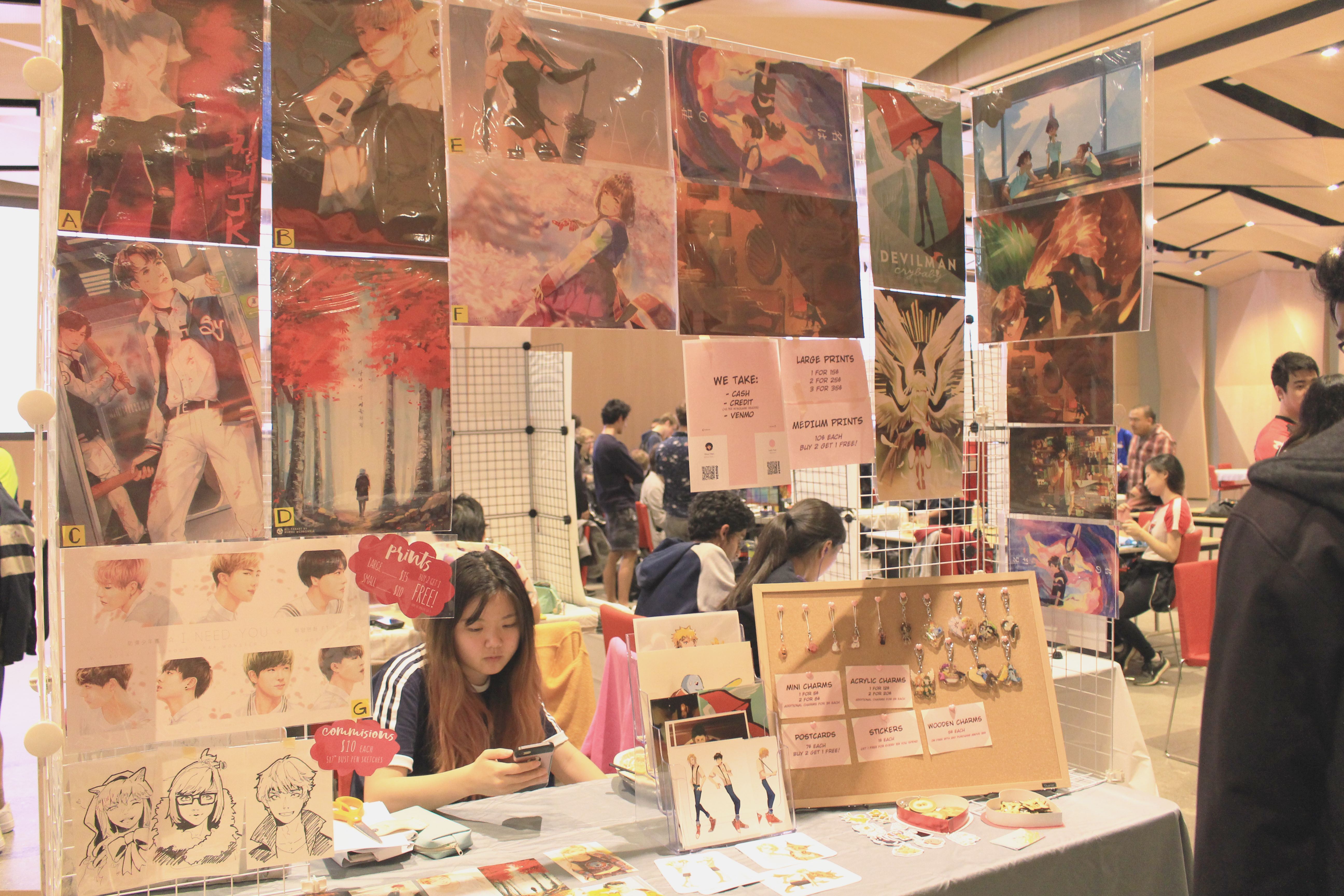 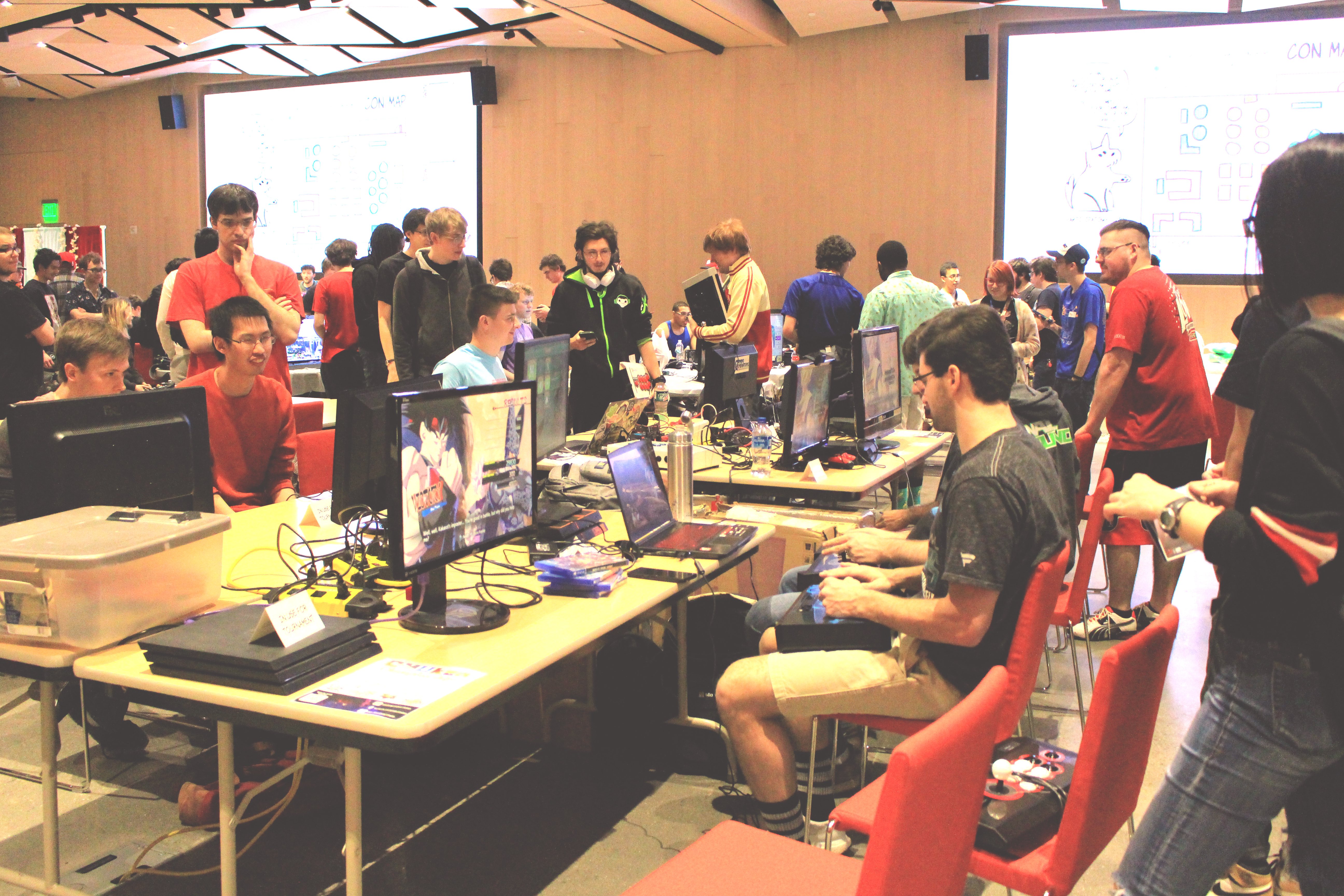 "Hit you with that ddu du ddu du du!"

The voices of K-pop girl group Blackpink blasted through the speakers in the Tepper Simmons Auditorium, blanketing the venue with an upbeat and vibrant energy. Girls in soft pink Lolita fashion-inspired dresses floated among the many tables, intermingling with the Super Smash Bros. Ultimate tournament players. Filled to the brim with convention and video game enthusiasts, ScottyCon 2019 was a smashing success.

ScottyCon, the first of its kind at Carnegie Mellon, was a multi-organization collaboration: Cosplay@CMU, Artists Alley Club, CMU E-Sports, Game Creation Society, and Vermillion Anime Club all worked together to create an anime and video game convention reminiscent of other conventions like AnimeExpo. Each organization had their own space within the auditorium featuring crafts, trivia games, multiple setups for video game tournaments, and anime screenings, providing a wide variety of fun activities to explore.

Cosplay@CMU hosted a series of activity tables where con-goers could sew their own mini-Scotty dog or sakura flower plushies, or create their own charms using acrylic and markers. Spreading the spirit of cosplay through these fun handmade activities, many a con-goer left with a smile on their face and a plushie in their hand. Nearby was a photobooth setup, complete with an Instagram frame and a collection of colorful props and costumes, where cosplayers could pose for a ScottyCon photo.

Artists Alley Club had set up an alley that featured seven tables of artists: Lauren Zhang, Alyssa, Lexin & Dina, Fenkko + Jaesti, Sophia & Xiang, and Grace + Eileen. Con-goers were able to support their fellow Carnegie Mellon student artists by purchasing fun stickers, beautiful prints, cute charms, and commissions. It was incredibly cool to see the artwork that students here are creating, and to support them directly by buying their art!

CMU E-Sports dominated much of the event space with a variety of video game tournaments. With some table set up for friendly, non-competitive players and others designated specifically for tournament players, the CMU E-Sports tables were crowded with energetic onlookers and players. While Smash Ultimate was the main tournament of the day, players could participate in other competitive video games like Dragon Ball FighterZ, Street Fighter V AE, Guilty Gear Xrd Rev 2, and Tekken 7.

Alongside CMU E-Sports’ collection of AAA games was CMU’s Game Creation Society’s collection of impressive student-made video games. The Game Creation Society (GCS) occupied the far end of the auditorium, showcasing video games and current projects made by Carnegie Mellon students that con-goers could help playtest. The biggest draws were the GCS-built upright arcade machine, where con-goers could play a student-made game with classic arcade controls and aesthetics, and a VR area.

Just left from the GCS zone was Vermillion Anime Club’s zone, where they featured a variety of episodic anime screenings throughout the event, as well as a variety of trivia events. If con-goers needed a break from the high-energy tournaments or from simply walking around, they could enjoy episodes of anime like Cowboy Bebop, One Punch Man, Nichijou, or Asobi Asobase.

And if all this wasn’t enough, ScottyCon also hosted smaller competitions, like “Guess the Anime OP” and “K-Pop Random Play Dances.” If attendees got hungry, they could stop by a small snacks table complete with Calpico drinks, Pocky, and Hi-Chews — classic anime and video game convention food. Con-goers also received a small stamp card. If they collected all the stamps from all of the various zones in the convention, they could enter raffles co-hosted with Tekko 2019: mini ones for small prizes, and one with a grand prize of two tickets to Tekkoshocon 2019, Pittsburgh’s premiere Anime, Gaming, Music, Fashion and Japanese Pop Culture Convention (courtesy of Tekko 2019).

All in all, ScottyCon 2019 was an incredibly successful event. All the attendees seemed to really enjoy the smaller-scale AnimeExpo, thanks to the impressive organizational work from the various student organizations involved. Folks from the University of Pittsburgh and the general Pittsburgh area all came to enjoy Carnegie Mellon’s first anime/video game convention, and will hopefully continue to do so in the years to come.