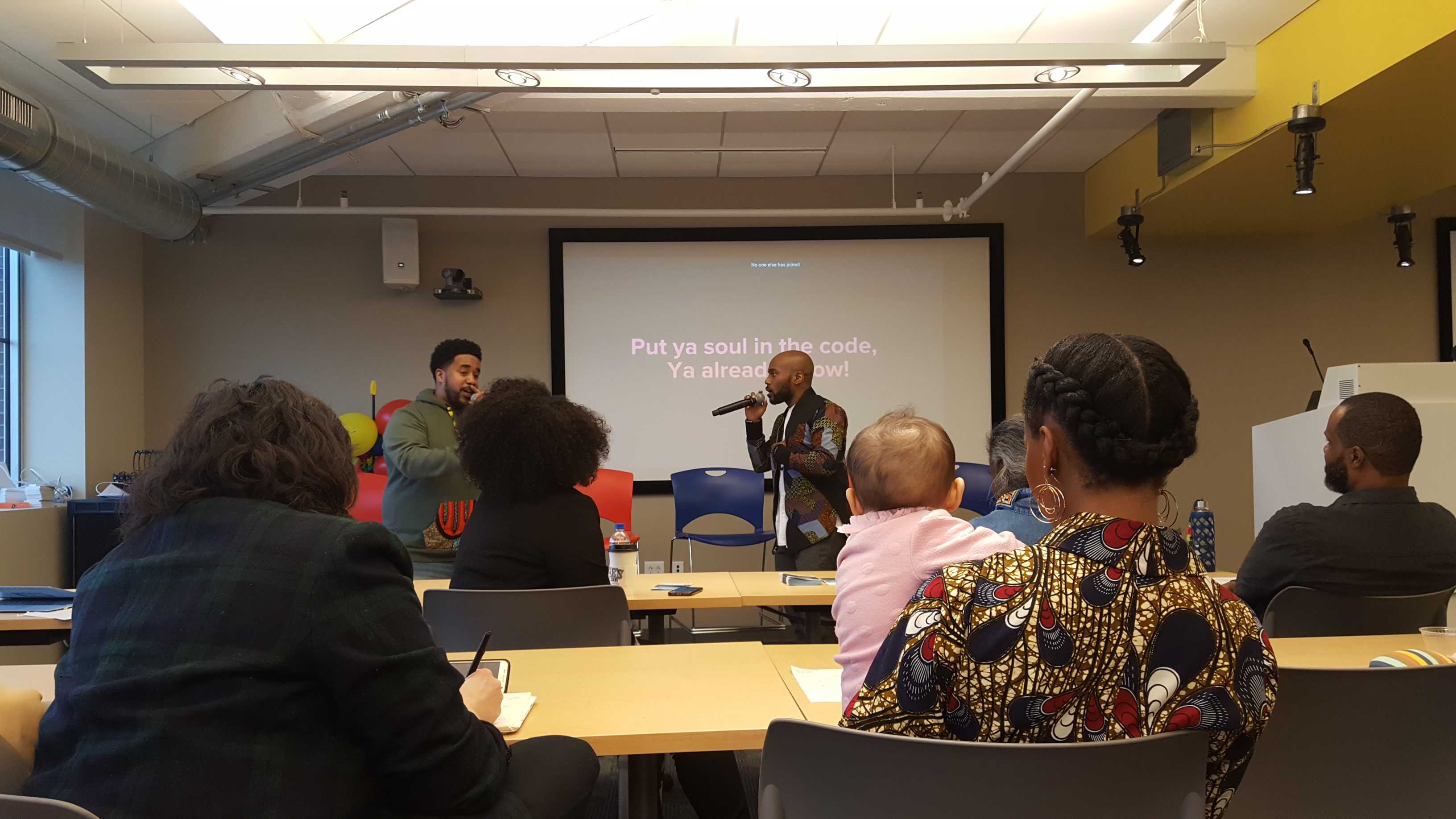 Organized by Ayana Ledford, the director of diversity and inclusion for Dietrich and Heinz Colleges, and associate professors of English Richard Purcell and Stephen Wittek, TripTech took place over three days and culminated in Saturday’s hackathon. The event was free and open to the public. Thursday and Friday featured panels on tech, education, and arts in the Pittsburgh community and beyond, with an emphasis on collaboration across groups.

“I am not a coder,” said LaTrenda Leonard Sherill of Remake Learning in Pittsburgh, at Friday night’s panel. “I am a collaborator, a convener, and a coalition builder. And that’s what we’re working on.” Last year in Pennsylvania, of the 4,000 students who took the AP Computer Science Exam, only 300 were Latinx or Black. “And most of them were in Philadelphia,” Leonard Sherill added.

Though much of Saturday’s activities focused on Python-based code and concepts, the educational theme among panelists was teaching students ways of thinking, not just hard skills like coding. “In school, you’re told what to do, to follow the rules,” said Nina Barbuto, director of Assemble, speaking about the importance of art in technology education.

Saturday’s events kicked off with a talk by journalist, activist, educator, and producer Manny Faces on innovation and hacking in hip-hop. Later, Chenits Pettigrew and John Robinson of Rapport Studios led the group in a condensed lesson on algorithms from their forthcoming project codeSCTY (“Code Society”), which teaches coding basics through rap and hip-hop.

Rapport released an album for the project where every song corresponds to a lesson plan, featuring lyrics like “Be your own boss, we gotta switch the mode / put your soul in the flow that’s controlling the code,” and “recipe for success / a blueprint for building / some moves to live by / steps for solutions.”

Pettigrew previously had success using hip hop and other musical elements to teach US history and English. After crossing paths with a few tech education advocates (including Richard Achee, who works on Google Cloud’s strategic partnerships) and living through the “tech revolution,” he saw a chance to expand the reach of Rapport. “These concepts of computational thinking have a lot more application beyond computer science, but we need to contextualize it all for the kids we’re working with.” So he paired up with John Robinson (formerly Lil’ Sci), who has been performing, educating, and writing rap music for over 20 years, to develop a culturally responsive computer science curriculum for middle and high school students.

Participants in the hackathon also got to demo Python MC, a collaboration between Google employee Richard Achee and Rapport Studios. Think of a blend between GarageBand and Python. The platform allows educators and students to explore variables, loops, and functions in the context of music-making, all coded in Python and free of charge.

Bakery Square, where the Google offices are located, was redeveloped by Walnut Capital between 2007 and 2010, and is now home to nearly 20 businesses, as well as offices for UPMC and Carnegie Mellon’s Software Engineering Institute. The development has been criticized as a gentrification project that excludes longtime East End residents; however, on Saturday the doors to Google were open for anybody interested to come in.

“I see Carnegie Mellon as a convener and a partner sharing our resources, and I also see the Pittsburgh community as a convener and a partner sharing its resources,” said Ayana Ledford, reflecting on the role of each in helping the city move forward. “There’s a lot of community talent that will help make the tools we make in the university much more accessible.”

This year’s event was smaller than she and the other organizers anticipated, partially due to Carnegie Mellon’s Energy Week and the continued demonstrations against the Rosfeld verdict across the city. “I see a lot of value and missed opportunity for those who weren’t able to attend,” she said, hoping that next year, with strategic planning and some momentum from this year’s events, TripTech will be bigger.