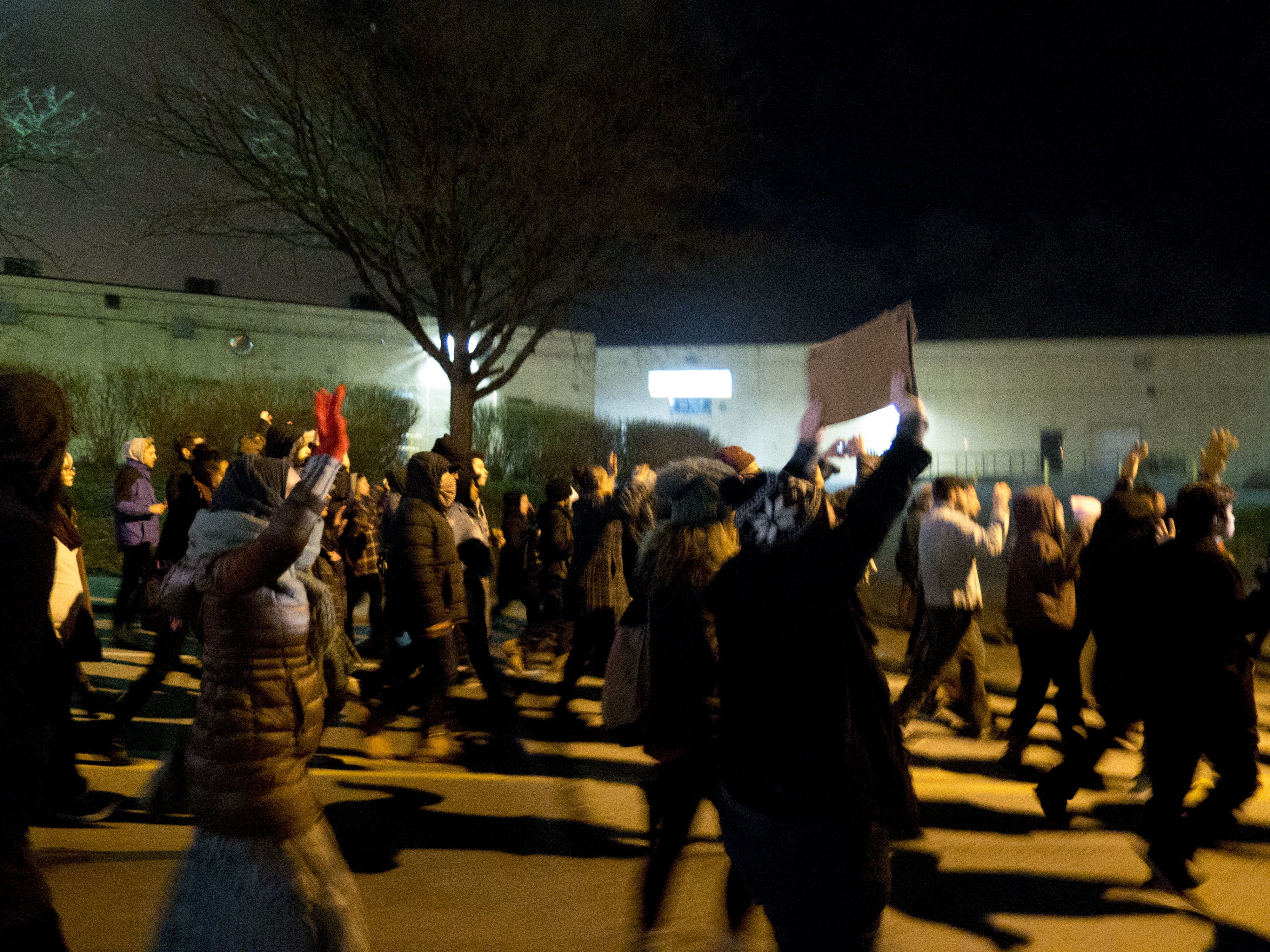 “How old was he?” “17!” shouted the crowd gathered on South Highland Avenue, outside of chain restaurant Mad Mex. On the night of March 22, hundreds marched through the streets of East Liberty to protest the acquittal of Michael Rosfeld, a police officer who in June 2018 shot and killed Antwon Rose II, a 17-year-old Woodland Hills high school student.

“Antwon Rose was not a threat!” shouted the crowd as they marched down South Highland Avenue. Chanting “Hands up, don’t shoot!” the group walked down Penn Avenue, a busy four- lane street, with their hands raised. Police blocked traffic and three helicopters circled overhead, echoing.

On June 19, 2018, Officer Michael Rosfeld pulled over a gold Chevy Cruze in East Pittsburgh that matched the description of a vehicle involved in a North Braddock drive-by shooting 13 minutes earlier. As Rosfeld began to arrest the driver of the vehicle, the two passengers exited the back seats and fled. Rosfeld shot Rose three times, hitting him in his face, elbow, and back. Rose was unarmed. Later, authorities found two handguns in the car. Cell phone footage showing the incident was widely shared on social media.

In his testimony, Mr. Rosfeld said he believed Rose and the others in the car could have been a danger to the community. He says he fired because he believed one of them had pointed a handgun at him.

When deadly force is used against a fleeing suspected felon, Pennsylvania law justifies law enforcement’s actions if the officer believes it was necessary to prevent death or injury to themselves or others. David A. Harris, a professor of law at the University of Pittsburgh, told the Pittsburgh Post-Gazette that “[police] don’t have to be correct about the presence of the gun,” which he states is “a standard that favors police.”

The night of the acquittal, protestors in East Liberty called for “the laws that justified this murder to be changed.” The leaders of the protest called out, “Is Pittsburgh stronger than hate?” and marchers responded “Hell no!”

Protests and demonstrations have continued to be held throughout Pittsburgh in the weeks since the March 22 acquittal. The following Saturday, students marched through Oakland, blocking traffic on Bigelow Boulevard. They entered restaurants like The Porch and Hello Bistro, protesting Pittsburgh’s gentrification, as documented by Post-Gazette reporter Courtney Linder.

On Sunday, nearly 200 gathered for a vigil at the Hawkins Village housing complex where Rose resided. Flowers and candles were places in the center of the basketball court where Rose hung out. Tim Stevens, a longtime social activist, told the Post-Gazette that “One of [his] concerns is that African American kids will get the message that our lives don’t mean anything.”

On Monday, nearly 1000 high school and college students walked out of class. Marching through the streets of downtown, they chanted “Three shots in the back, how do you justify that?” as reported by 90.5 WESA.

Shortly before midnight on March 22, President Jahanian sent an email to the Carnegie Mellon community addressing the acquittal. He said, “no matter our individual opinions about the outcome or the broader societal questions surrounding the trial, we can certainly empathize with the immense pain of a life lost too soon.” Jahanian encouraged students to prioritize their safety if they decide to protest.

Plastered in neighborhoods throughout the city and on the Carnegie Mellon campus are posters of Antwon Rose II, often with the phrase “say my name” or with his poem titled “I am not what you think I am.” In the poem, Rose repeated “I am confused and afraid” and addresses the fear he experienced growing up black in the United States.

On Thursday the University of Pittsburgh Black Action Society staged a die-in on the steps of the William Penn Union. Nearly 120 students, mostly dressed in black, sat on the steps for around 40 minutes in complete silence, as reported by Pitt News.

University of Pittsburgh students are working to plan a protest this coming week, but plans are not confirmed. “Activism on Pitt campus is a little tough,” said Jordan Fields, a junior at the University of Pittsburgh who is involved in social justice work. Field said that some organizations are reluctant to participate in demonstrations because the “administration steps on student’s toes” for demonstrations that are not “sit-ins or die-ins.” She added that “students are frustrated by the pushback that comes with student activism.”

Fields told The Tartan that the Black Men’s Collective has written a list of demands aiming to “make the Pitt experience more comfortable for students of color.”

“I think a lot of black students realize that that could have been any of us,” said Fields. She continued, “Especially since the police officer that killed [Rose] literally worked on campus. And thats even more scary because you wonder now, are there people on this campus [hired] by the university who are capable of killing one us?”