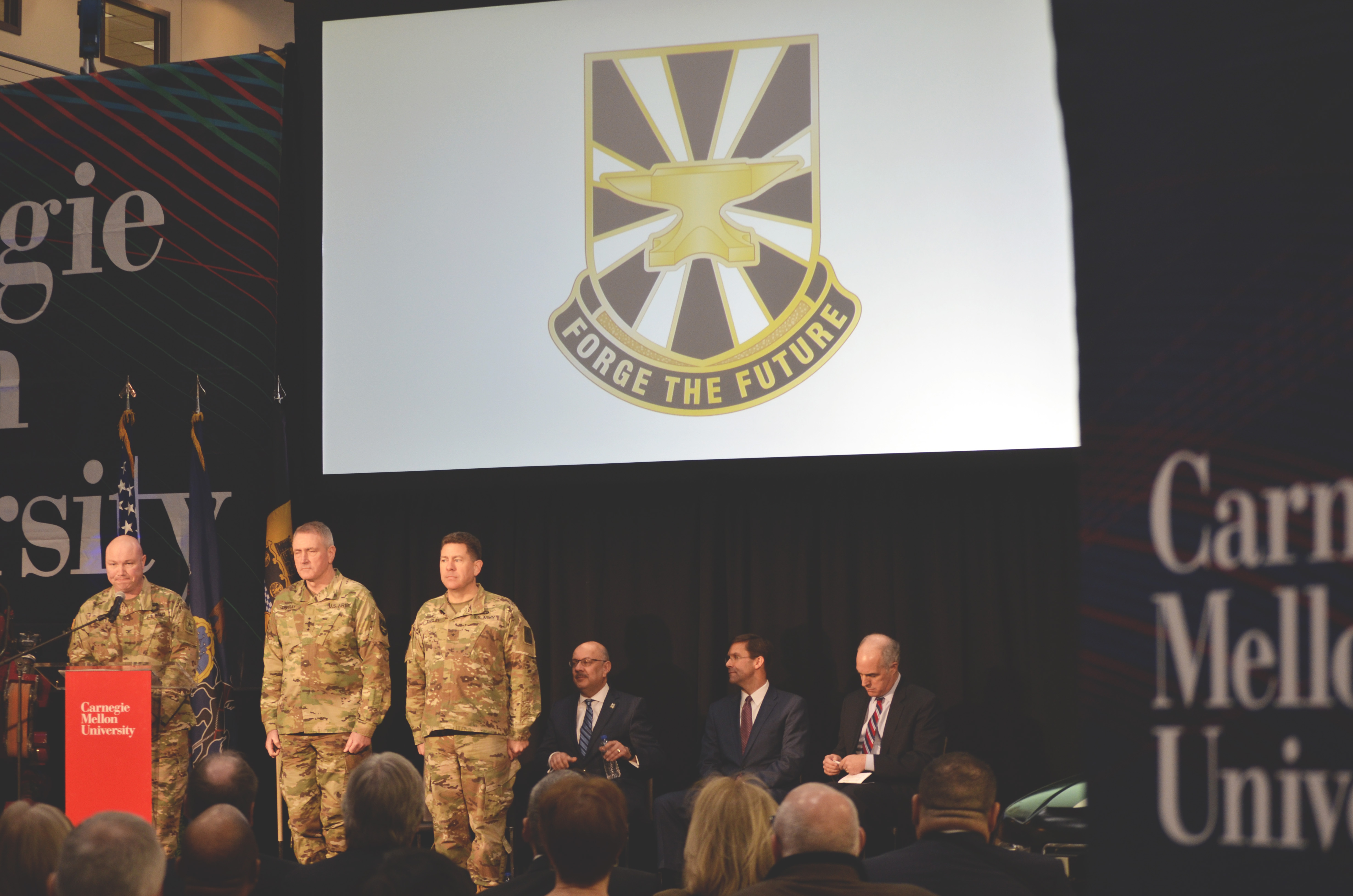 The Army Futures Command, said General John Murray this past Friday, makes the Army like “a startup overseeing a merger.” Though Carnegie Mellon has its fair share of students working at startups, academics, politicians, and Army personnel gathered this past Friday to mark a collaboration that is perhaps even more familiar for the university — the Army AI Task Force represents only the most recent chapter in a 70 year history of Carnegie Mellon working with the Department of Defense.

Secretary of the Army Mark T. Esper released an Army directive on Oct. 2, 2018, oulining the purpose of the Army AI Task Force, housed at Carnegie Mellon’s National Robotics Engineering Center, which is “to enhance our warfighters, preserve peace, and, if required, fight to win.”

Specifically, the task force is meant oversee the initiation of “Service-sponsored projects,” compliance with “DoD National Military Initiatives,” the establishment of a development structure for these projects, and “[the review of] policies that prohibit or impede machine learning, deep learning, and automation, and coordinate resolution.”

The directive also implies that “initial operating capability” of the Army AI Task Force was established 30 days from the date of the directive, thus beginning Nov. 1, 2018, though the partnership was not announced on the University’s side until a Dec. 4, 2018 university press release.

Matt Nagal, Associate Vice President of Content & Communications at Carnegie Mellon explained that this was simply the “best time for the Army and CMU” as well as “key partners from both academia and industry from across the country.”

The press release highlights the importance of Army “engagement with the local innovation ecosystem of defense companies, small businesses, and startups in the Pittsburgh region.” One Breaking Defence article explains that the project serves as not only a space for technological development, but also to “connect the Army to a much wider world that it has struggled to connect with — a world where many key players, such as Google, have outright refused to work directly with the military.”

General Murray told The Tartan that the Army has “closed out any innovation, any free thinking into how we have solved problems from a material standpoint and a lot of other standpoints for many years.” Murray follows that the task force will “get young students [and] young developers together with young soldiers,” continuing, as when he referred to the Army as a “startup,” to adopt the language of Silicon Valley to describe the projects handled by the task force. Nagal expanded on this by saying “In essence, we are replicating what leading companies have done to become more innovative and that is a big reason why the Army is moving closer to universities.”

As President Jahanian told the Tartan, “CMU serves as a hub, and as a connection point to academics and industry partners across the country.” Because of this, the Army Future Command found Carnegie Mellon to base their initiative to “Forge the Future,” as their official slogan states.

Murray said that as the “character of war” continues to evolve, noting quantum computing, ventures into space, directed energy, AI, and machine learning, artificial intelligence will be “in everything, and everywhere.” The task force, according to Murray, is not just meant to “make our soldiers and units of the future more effective,” but “better yet” may end conflict because “there will be nobody in the world who will challenge [the U.S.].”

The next to speak was Carnegie Mellon president Farnam Jahanian, who excitedly stated “Carnegie Mellon stands ready to assist the Army” to advance breakthroughs in the future of multi-industry artificial intelligence development.

Many stressed a presumed inevitability of these developments in AI weapons systems, with Esper predicting that a “decisive edge on the battlefield for years to come” would be given to “whoever gets there first,” referring to advances in military AI technology. Murray later echoed his sentiment and added, “I would also argue that regardless of what we do there are others in the world that do not have the same ethical considerations.”

Murray suggested that these same ‘ethical considerations’ would follow whatever inevitable technological development arose from the task force, stating at the press conference, “the policy, those discussions will have to come. But [what] we can’t afford to do is pace ourselves on policy. We are going to have to push the envelope a bit to get the policy discussions going.” In terms of policy, part of task force is concerned with attempting to “remove barriers to its ability to move fast, while maintaining safety and rigor, as [the task force] brings new technology and new capabilities to its forces.

Jahanian was also pressed by reporters at the press conference about the process of ethical consideration before accepting this partnership with the Army, that will likely involve work towards the development of autonomous weapons. Jahanian deferred to the potential nonmilitary applications of the technology developed at Carnegie Mellon, finding that “all of the applications that I talked about, which [have] broad civilian as well as military application, that benefit society, not only do I not have any concerns about working in AI and robotics but given the examples that I gave you, why wouldn’t we want to save the lives of soldiers?”

The Army AI Task Force, now launched, will begin to oversee AI projects for the military and serve as the blueprint for other branches of the task force that are to launch in Washington D.C. and at the Pentagon. Whether or not these developments are inevitable, those asking ethical questions likely are not going to wait for the technology to push the envelope to try and get answers.