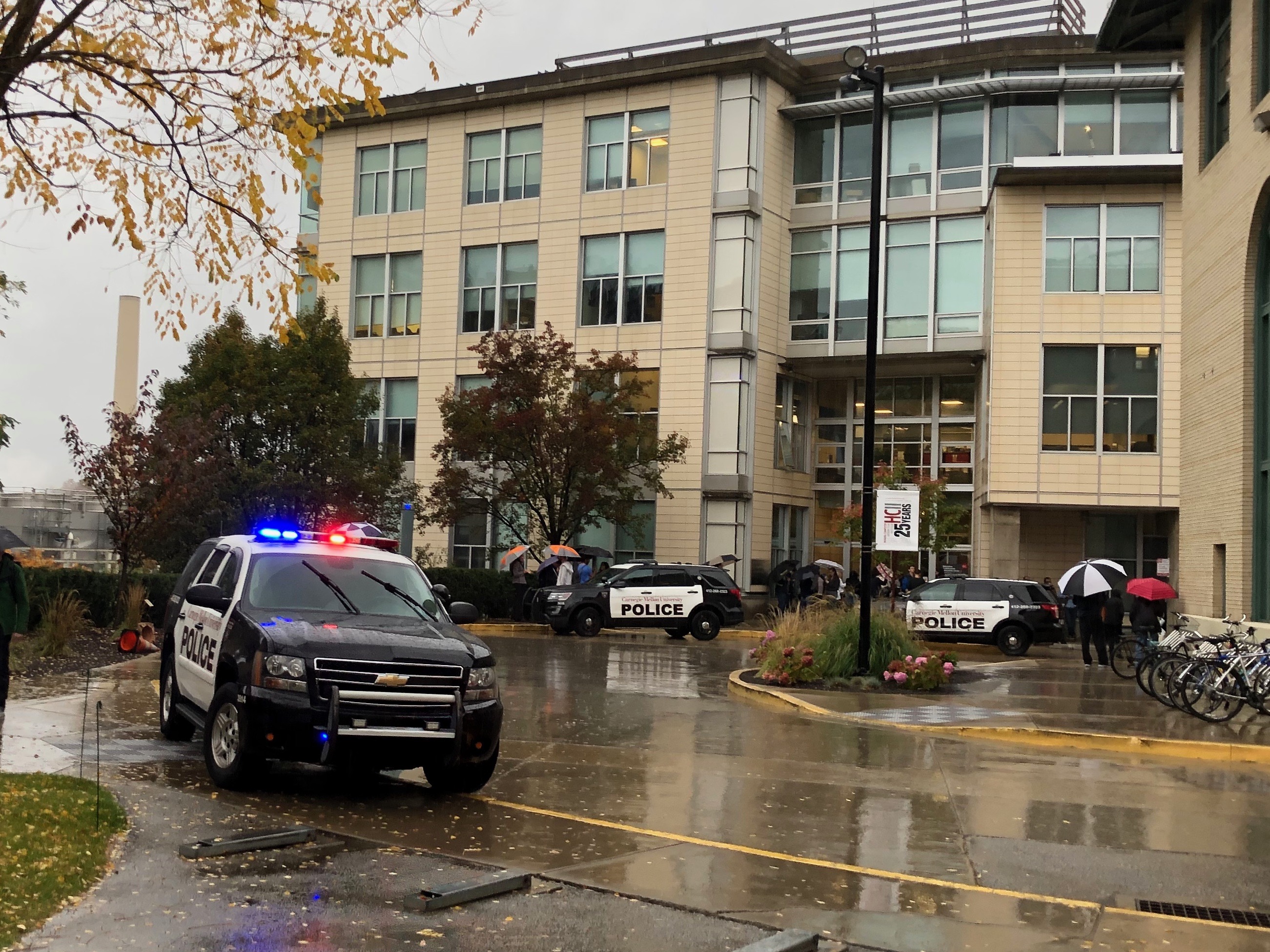 Carnegie Mellon police respond to the Collaborative Innovation Center after a car fire broke out in the building’s garage. (credit: Jacob Paul/Layout Manager)

On Thursday, a car in the parking garage of the Robert Mehrabian Collaborative Innovation Center (CIC) caught fire. The fire filled the first floor of the CIC with smoke, but no one was injured in the incident, according to Jason Maderer, the senior director of Carnegie Mellon media relations.

Students and staff were evacuated from the CIC at approximately 2:40 p.m. It was pouring rain outside and most people gathered under a covered space near the main entrance of the building.

“It smelled like plastic burning when we walked out,” said Tricia Flinn, a Senior Technical Writer & Content Strategist in SEI, who regretted leaving her laptop inside. “It’s just that I’m on a deadline. But all the people are out and that’s what matters.”

Many people weren’t sure why they had been evacuated, but remained calm through the ordeal. Carnegie Mellon security officer Justin Iaquinta was informed of a fire in the garage but did not know any other details. Many exiting the building waited inside Newell-Simon Hall while waiting for the CIC to be cleared.

Thomas Ogden, Carnegie Mellon Police Chief, said that the main safety concern on the situation was the smoke produced by the downstairs fire. “The whole building is filled with smoke,” he said, as safety officials evacuated the building.

The Pittsburgh Fire Department and Carnegie Mellon police responded to the incident, according to Maderer, as did Carnegie Mellon’s Environmental Health & Safety, Facilities Management and Enterprise Risk Management.

The fire was extinguished by 3:15 p.m. Fans were used to clear out the smoke and people were able to re-enter the CIC at about 4:00 p.m. “12 straight sunny days and this happens today,” Ogden said, referring to how people had to wait outside in the rain.

Carnegie Mellon’s Enviromental Health and Saftey department’s guidelines suggest that in the event of a fire, those involved should evacuate calmly, listen for instructions, crawl below the smoke, test doors for heat carefully, avoid using elevators, and avoid re-entering the building until directed.