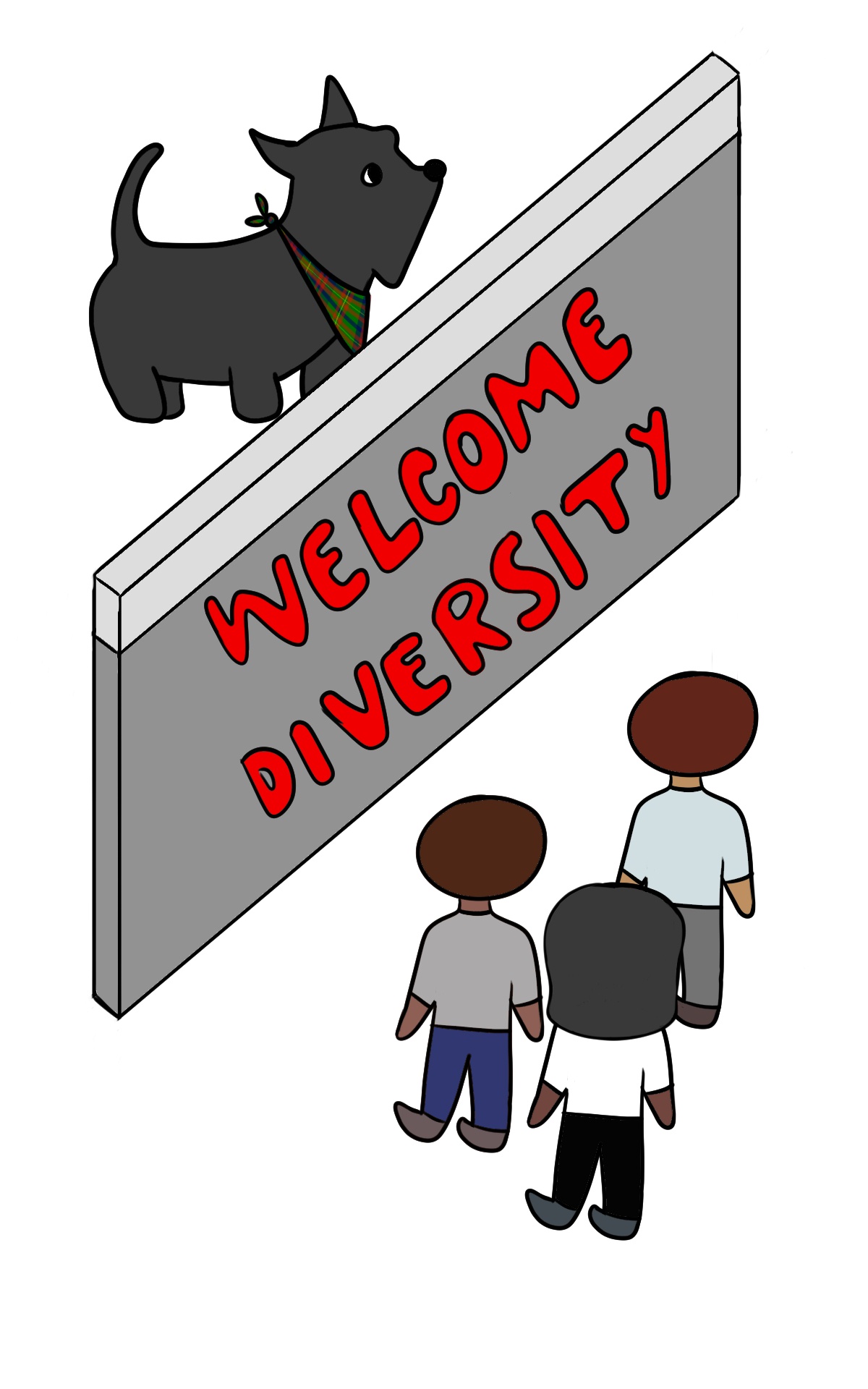 Disclaimer: All participants have requested that their names be changed to ensure confidentiality.

At the end of every week, I find myself sitting on my bed with my laptop open and music playing. Across from me are my suitemates, giggling and catching up after a long week of classes, tests, and activities. As the clock nears 1 a.m., our laughs fade and the music grows somber as the conversation shifts to the topic it always ends up being: existing at Carnegie Mellon University as underrepresented minorities. Whether we’re talking about stares, treatment, or undisguised disrespect, we often think of the looming question that many students like ourselves face at Carnegie Mellon: Do we belong here?

I grapple with this question almost every day, even knowing that I am part of the upper-middle class. Nonetheless, the post-Celebration of Diversity fantasy of an all-inclusive Carnegie Mellon community has faded. It's not just me who feels this way. Time and time again, I have seen the blatant disrespect and struggles that underrepresented minorities face on campus. With so few Native American students at Carnegie Mellon — only six in the class of 2023 — I cannot even begin to fathom what “belonging” means to them. To scope out whether or not underrepresented minorities feel they belong, I opened up a form for students to express their sentiments.

“Yes and no,” John, a first-year in CFA replied. “I know that I deserve to be here because I worked as hard as everyone else and [I] have something of value to offer. However, the institution itself is not designed to accommodate underrepresented students and instead decides to cater to the majority — in CMU’s case, white and East Asian students.”

“Not really,” responds Monica, a sophomore in Dietrich College of Humanities and Social Sciences.“I just feel a little isolated at times, and when I walk around certain buildings — Gates, for example — I feel like people know that I, as a Black person, don’t belong there.”

“Yes,” Ralph, a CIT sophomore says. “I worked just as hard to get here as anyone else.”

“The simplest answer is no,” Jessie, a sophomore in MCS, states. “Not only am I one of the few women in my major, but I am the only black woman.”

“I feel like I belong within the Black community,” says Lisa, a junior in CIT. “But in Carnegie Mellon as a whole, probably not.”

The most rampant form of disrespect faced by underrepresented minorities at Carnegie Mellon is microaggressions, comments or actions that unconsciously or unintentionally express prejudices toward minorities. Most responses to the form, which asked about students’ relationship with race since being at Carnegie Mellon, discussed the insidious nature of microaggressions.

“I know people who just think of it as being normal because the number of microaggressions [is] too tiring to pay any mind to,” John states. “From racial assumptions based [on] where someone is from, to faculty focusing solely on Eurocentric curricula, there isn’t a sense of urgency or priority towards minority stories or history.”

“I get called the wrong name all the time,” Monica shares. “Whenever I am in a space with more than one Black woman, I am always mistaken for the other one. It’s a bit aggravating.”

“A lot of people seem afraid to converse with me, even my neighbor right down the hall who I see every day,” says Olivia, a first-year student in Tepper. “It just seems kind of weird sometimes. It’s like they’ve never seen someone who looks like me before.”

Other times the microaggressions are more blatant.

As Ralph puts it, “It's always small comments from others when people say ‘I can't relate’ because I'm Mexican, or when they comment that I'm one of the few Mexicans on campus. They’re comfortable crossing these verbal boundaries and saying these insensitive things, often without realizing how it makes me feel.”

“I'm undermined so often, even when asking for help,” shares Lisa. “And this is something that happened when I was trying to get help from a TA.”

“My race and ethnicity have been tied to my socioeconomic status from friends of mine,” shares Zachary, a sophomore in CIT. “And it feels like they have set lower bars for me simply for being a minority.”

“Many of my authority figures are racist,” Jessie states. “I’ve had teaching assistants take one look at my skin and ask me which part of Africa I am from. When I complain, they say they are just trying to get to know me and my heritage better. But is it not racist to ask every black person you encounter which part of Africa they are from?”

Microaggressions, as subtle as they can be, are mentally taxing for underrepresented minorities. Underrepresented minorities must exist within a space where they often question whether they even belong while dealing with the stress of Carnegie Mellon academics. On top of that, mental health is often disregarded and seen as shameful in many of our cultures, making effects much worse. I cannot even begin to describe the psychological toll microaggressions have on students right here, right now, but Zachary hits the nail on the head.

“I have gone through feelings of rejection and tried fighting to have my identity noticed here,” he shares. “But ultimately, I have grown numb to the alienating forces of this school’s student body. This is something that, sadly, I feel a lot of my peers have felt also.”

Our students should not be feeling numb and helpless due to parts of their identity they cannot change; however, it is not surprising. Why is there such a lack of outrage from not only the administration, but the faculty and the rest of the student body? What can Carnegie Mellon do from here on?

First, the institution must realize that diversity, equity, and inclusion efforts are urgent. While I believe the institution has the best intentions in efforts to “do better”, and our university is improving in comparison to accounts from 2015, effective and direct diversity efforts can only come with a realized sense of priority. This does not equate to simply saying that you will listen, or that you care: Urgency demands immediate, thoughtful action.

Another issue Carnegie Mellon deals within its diversity, equity, and inclusion efforts is the lack of visibility. To clarify, I understand there are ongoing task forces, committees, and safe spaces to improve the state of diversity and inclusion here at Carnegie Mellon. I do not discredit the work of undergraduate and graduate students, faculty, staff, and professors who are working toward the creation of programs, scholarships, and resources. However, I know of these efforts because I happen to be part of them. What about students who are not? Or students who are applying to Carnegie Mellon? Students from marginalized groups should not be lost when they feel uncomfortable or alone.

The urgency and visibility of current efforts ultimately warrant transparency. Effective diversity, equity, and inclusion efforts require complete honesty with how things are now. Why are we, in a way, lying to students? Whether it is to prospective or current students, why are we patting ourselves on the back for a job well done, when we also know the job is far from being done? Several of the students interviewed shared feelings of being disillusioned during the Celebration of Diversity weekends that are offered a few times a year.

“Like many college advertisements, the weekend was a distortion of the true diversity of the campus and the associated resources it offers,” states Kyle, a senior in Dietrich College.

“Celebration of Diversity made me feel like I finally had a space to learn and grow without having to worry about the color of my skin every minute,” Jessie reflects. “But my first few weeks of college confused me. This wasn’t the representation that was presented at the diversity weekend.”

“The best part of it was connecting with other students applying,” shares David, a sophomore in Dietrich College. “It’s unfortunate, though, because I don’t even remember the programs or panels.”

When discussing transparency in Carnegie Mellon’s diversity, equity, and inclusion efforts, David and I reflect on the Building Our Network of Diversity Luncheon that we both attended in September. Being transparent would facilitate diversity efforts and invoke real change, allowing students to trust the administration.

However, as we observed at this luncheon, the institution refuses to acknowledge faults. Following an excessive twenty-minute faculty introduction, the Office of Admissions presented data showing the increase of “low-yielding underrepresented students” and women from 2015 to now. The Office of Administration did not present numbers on a school-to-school basis, avoiding acknowledging that many of our undergraduate schools have serious racial and class diversity issues.

“I understand not wanting to show numbers that go against you,” David reflects. “But pretending does so much more damage.”

The Admissions Office and faculty also invoked The Tyranny of the Meritocracy by Lani Guinier. The book, which discusses the broken education system that exists in the United States, was a microscopic band-aid of an excuse — because of the “way things are,” there is only so much that Carnegie Mellon can do. If the institution can quietly raise over $1 billion for multiple high-tech, modern buildings, and thirty endowed faculty chairs, they can spare a dollar for effective recruitment methods.

“Carnegie Mellon wants to hold us, the students, to certain standards,” David says of the matter. “But the institution should also be held to the same standard.”

Why has there not been urgency, visibility, and transparency in diversity and inclusion efforts in the first place? If my time here has taught me anything, it is this: Carnegie Mellon University fosters a culture of political apathy which in effect, makes urgency, visibility, and transparency in current efforts less important to the administration. Why take direct action when it is easier to pretend?

Political apathy is the lack of interest in the state of politics. I understand to a certain extent the implications, especially for international students, of taking a public political stance, and I certainly do not blame them as individuals. I am more disconcerted with Carnegie Mellon’s pledge for diversity and inclusion efforts as the institution itself treads lightly in politics and taking action. Simply put, diversity and inclusion are inherently political projects.

For example, Carnegie Mellon cannot pledge support for Deferred Action for Childhood Arrivals (DACA) students, while partnering with Palantir Technologies, a top software company that has given important technologies to Immigration and Customs Enforcement (ICE). Carnegie Mellon cannot grant themselves the badge of “doing better” while our professors benefit from telescopes placed on sacred land and encourage the construction of the Thirty Meter Telescope. Carnegie Mellon cannot simply hire more faculty members of color while current faculty lack the training necessary to interact and positively connect with students from marginalized groups. The institution cannot promise to listen to the student body’s concerns and then do little productive action beyond listening. They are putting on an act, and I am not buying it.

At this point, I am desperate. I am begging. By refusing to acknowledge the intersection between diversity efforts and politics in the American context, the administration is complicit in the suffering of underrepresented minorities at Carnegie Mellon. With a complicit administration comes a complicit student body, and that is unacceptable. We have suffered and continue to suffer in silence.