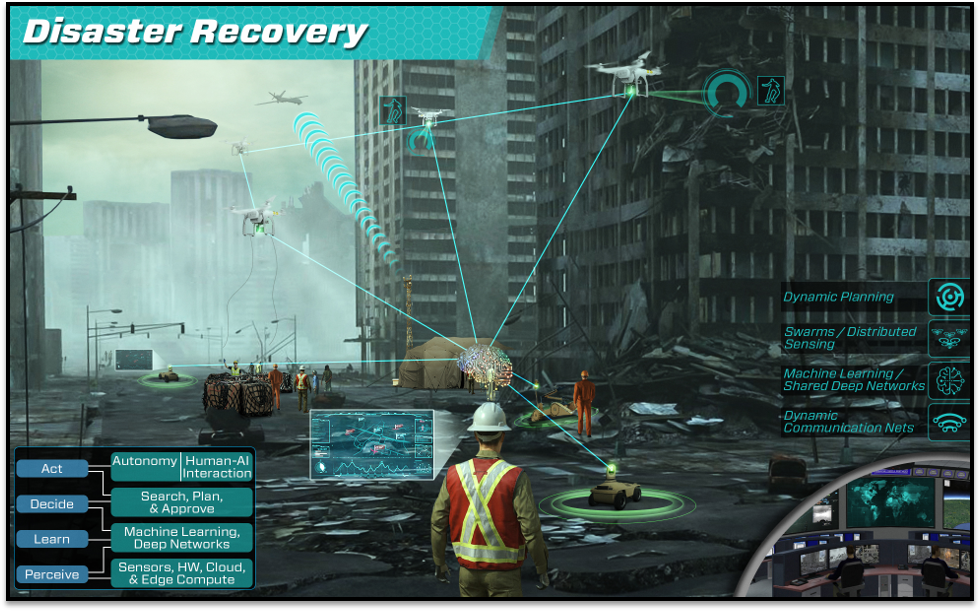 An artist rendering considers the various applications of AI in a disaster relief context. Five projects have been launched under this agreement so far, but their uses expand beyond disasters. (credit: Courtesty of Northrop Grumman)

Last month, Carnegie Mellon and Northrop Grumman signed a new master research agreement that will better allow the aerospace and defense company to kick start university research projects. The agreement launched five initial projects with the intent to aid in natural disaster response situations, but as stated by company representatives, the eventual application of Carnegie Mellon-developed technologies could be further reaching.

In an interview with The Tartan, Karen Metzler, strategic director at Northrop Grumman, said that the initial five projects address “core technolog[ies] that could be applied to a number of different applications.” She noted that the projects are “focused around solving the hard technical problems… that technical problem may reside in other domains, in other applications as well.”

The projects fall under an initiative Northrop Grumman is dubbing “Strategic, Operational and Tactical Emergency Recovery through Innovations in AI,” or SOTERIA. Each project seeks to address a different facet of natural disaster response through applying a range of technologies.

According to the project’s written objective, Sycara’s “Interactive Dialogue for Human and Robot” seeks to improve communication between humans and robots by using machine learning techniques to send “directed/focused information,” rather than a stream of all robot sensor readings, back to human operators. Though the project’s listed intent is to improve robot and human communication in a disaster relief setting, Northrop Grumman has other potential uses in mind.

“Katia’s research is critical for warfighters to use on the battlefield,” said Erin Cherry, program manager for advanced intelligent systems at Northrop Grumman, in a statement to The Tartan. Cherry continued, “A fundamental contribution that robotic teams can provide to the warfighter is situation awareness.” This research is important for the future of robot sensory transmission because battlefield scenarios, like natural disaster response, present communication limitations, said Cherry.

Choset’s “Multi-Search for Signs of Life” project focuses on “deploying as many robots as available and combining their different motion capabilities (e.g. flying, ground, amphibious, etc.) and sensing modalities (e.g. camera, heat sensors, etc.) to search [for signs of life] faster.” Cherry says that this project’s applications “are very broad beyond disaster recovery, to any mission where autonomous platforms are scouting ahead.”

Cherry told The Tartan that Northrop Grumman “does not own exclusive rights to the intellectual property” of each researcher’s work, so currently, SOTERIA projects won’t be repackaged for other applications. Metzler notes that Northrop Grumman hopes “to expand upon the foundations” established in the SOTERIA projects for applications in other domains.

Alongside fellow professor Bob Iannucci, Joe-Wong is pursuing an IoT sensory that could transmit real-time data from a ground situation. In an email to the Tartan, Joe-Wong said that she wasn’t sure whether Northrop Grumman would be free to use the project’s findings in other domains, but thought they might. She added that other uses could include “monitoring traffic in smart cities” or “monitoring road infrastructure conditions.”

Neubig, another head SOTERIA researcher, is designing a new data description language to “be used by [analysts] to express their information needs, and then be used by machine learning methods to train automatic information extractors that learn jointly across multiple information classes.” In short, it’s an expansion of natural language-understanding technologies.

Neubig told The Tartan in an email that he will share the findings of his project with the broader scientific community through the release of open-source software and datasets.

Neubig says he does consider alternate uses, including potential military uses, of the technology which he and fellow researchers develop when he gets funding from sources like Northrop Grumman or the Department of Defence.

“I take on projects when I believe the possible upsides outweigh the possible downsides,” he said. In the case of the Northrop Grumman project, Neubig states there are relatively few downsides, and that the upsides include saving people’s lives in a disaster, or even further, contributing to cancer-curing research.

Neubig says he will not directly contribute to his technology’s use in the military, but that it may happen. “Given that I am making [the] research available, having better situational awareness can help prevent civilian casualties,” Neubig added. The three other Carnegie Mellon researchers leading SOTERIA projects did not immediately respond to request for comment.

The five SOTERIA projects are all in support of the Department of Defense’s Joint Artificial Intelligence Center’s (JAIC) National Mission Initiative, specifically, their push for humanitarian aid and disaster relief technologies.

Metzler says that although no one from the JAIC was involved in the planning of these projects or the agreement itself, having projects that support JAIC initiatives “allows us to really understand their problems, show how we’re solving them, and then drive into some joint research – customer funded research – between Northrop Grumman and Carnegie Mellon.”

The master research agreement (MRA), signed Oct. 30, will soon promote a larger network of Northrop Grumman-supported Carnegie Mellon research, Metzler says. She notes that the MRA is “a vehicle that will allow anybody across all of the company to work with Carnegie Mellon.”

J. Michael McQuade, Carnegie Mellon’s Vice President for Research could not be reached for comment but stated in the MRA’s press release that, “having companies like Northrop Grumman sponsor research at CMU is an important component of how industry and universities partner to support the nation’s vibrant innovation ecosystem.” McQuade continued, “Working together, we can accelerate the transformation of knowledge learned through basic research into applied commercial products.”