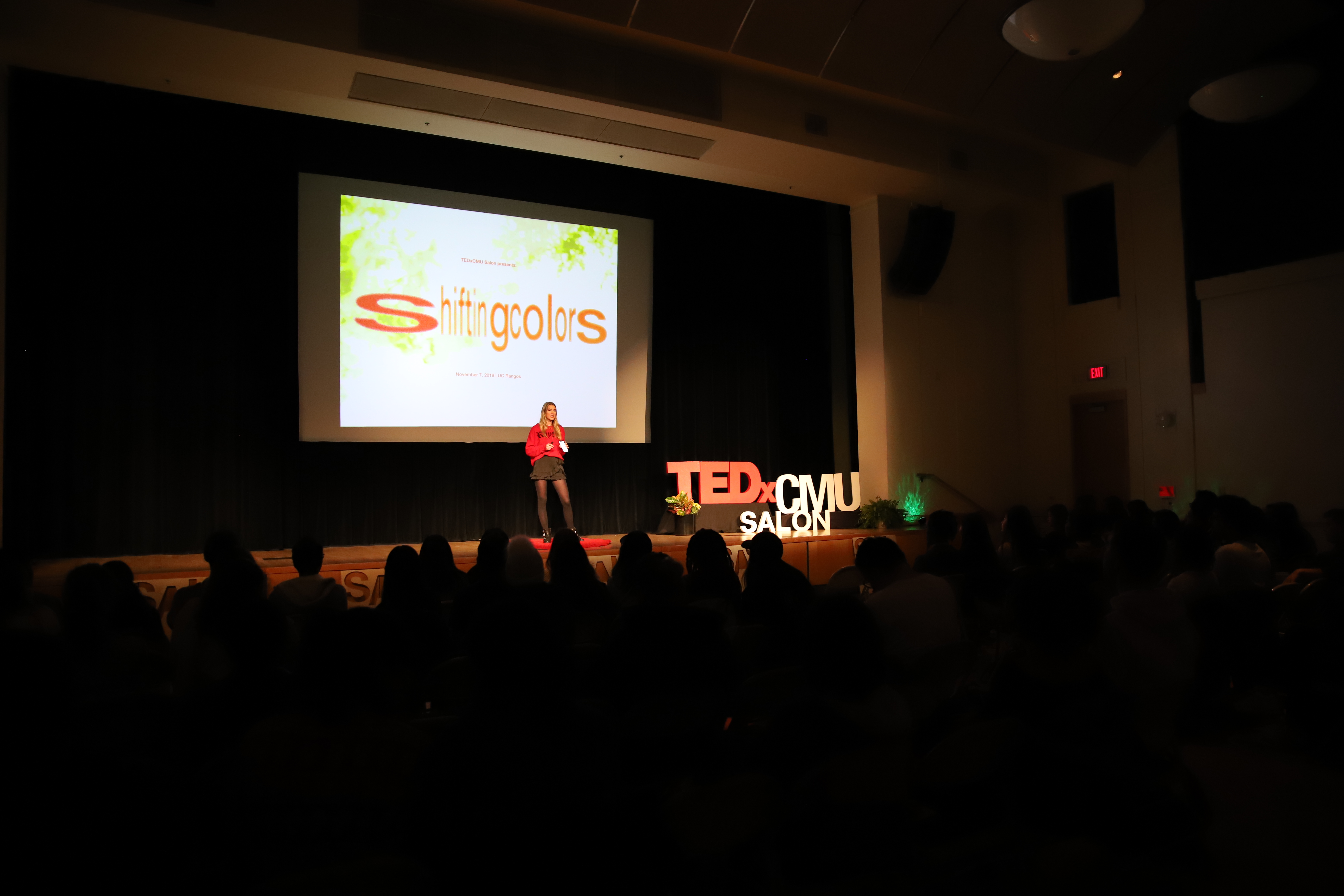 Alona Beloussova, one of the main organizers of TEDxCMU’s Salon event, introduces this year’s theme. It was the first year of the event, which presents student speakers. (credit: Courtesy of Haozhe Zhang, TEDxCMU)

On Thursday, Nov. 7, TEDxCMU hosted student speaks for their first Salon event. Alona Beloussova, head of TEDxCMU’s Salon, thought of the concept two years ago when the student organization was looking for speakers for the main spring event. She believes that students on our campus “are wise, and have so much knowledge and life experience.”

The theme for this year’s Salon was “Shifting Colors.” Beloussova states, “Fall is a time of reflection, taking things from the past and applying them to the future.” She wants the audience to think about “how we can learn and grow from the past.” She asks, “what can we do to be better in the future?”

The event, held in Rangos 1 in the Jared L. Cohon University Center, featured three students, each with their own presentation. Each speaker discussed topics drawing on their own ideals and experiences, and some called Carnegie Mellon community members to action with their own life stories.

The first speaker was Anirudh Narayanan, a junior in Social and Decision Sciences. He spoke about the idea that “altruism isn’t real… it’s something we need to achieve.”

Narayanan defined altruism using the concept of the warm glow effect (also known as impure altruism), the idea that helping others gives emotional benefits to oneself. He says these actions to help others can be as small as opening the door for someone, or as large as philanthropic actions, but there is always a warm glow effect.

An example Narayanan used for altruism is the TeamTree Initiative that was started by YouTubers Mark Rober and Mr. Beast. For every dollar a person donated, one tree would be planted until 20 million trees could be planted by the end of 2019.

Within two weeks of beginning the initiative, people all around the globe had already donated more than $14 million. Narayanan spoke of how this initiative is a great example of altruism because everyone is contributing to a collective benefit.

Jessica Cronin, a Masters student in drama, was the second speaker, giving a talk titled “Intergenerational Trauma and Addiction: Coming out of the Shadows.” She talked about her own history of dealing with her younger brother, who lived with an addiction of almost 10 years, and the resulting overwhelming feeling of being out of control.

When Cronin first shared her past and her struggles with her extended Carnegie Mellon family, she feared that people wouldn’t understand. However, she was met with compassion, as her friends and professors shared their own traumas with her.

This experience led her to the realization that opening up leads finding others who share similar experiences and a supportive community can be born. She was always told, “do what you can, but don’t talk to others about it.” Cronin says this mindset can be very damaging, as families of those with addiction are all collateral damage of the addiction stigma.

However, she wants to stress that “hiding creates isolation,” and perpetuates addict shaming, preventing people from sharing their experiences and seeking help. She closed her talk by stressing the importance of creating bonds with others and how having a community to support you through hardships is incredibly important.

The third and final speaker was Nathan Chen, a sophomore studying business administration, who talked about “the power of social relationships.” He also shared a deeply personal story on the passing of his father, who was diagnosed with stage four lung cancer when Nathan was only 12 years old.

He believes that the most difficult parts of life are that which lead to the most growth. His father was an incredibly inspirational figure to him, and he presented the crowd three invaluable lessons that he learned from his father.

The first lesson is gratitude. As he saw how friends and family flew thousands of miles just to see his father for the last time, he learned to always be grateful for people who invest in and care for him.
Second, he realized that everyone puts up facades in their life to hide their own struggles and pain. As a result, he is always kind to others because he understands how terrible it can be to go through struggles alone.

Lastly, the idea of an outlandish bucket list disappears when you are at death’s door. Instead, he learned from his father that relationships are what are the most important.

Citing a Harvard Adult Development study and the Roseto Effect, Chen notes how strong social relationships are the main way to have a happy and longer life, that can trump years of bad habits.

Chen urged the audience to consider their priorities in their own lives and whether or not they are showing appreciation and gratitude to those that matter. He ended his speech with a quote by Stuart Scott: “When you die, it does not mean that you lose to cancer. You beat cancer by how you live, why you live, and the manner in which you live.”