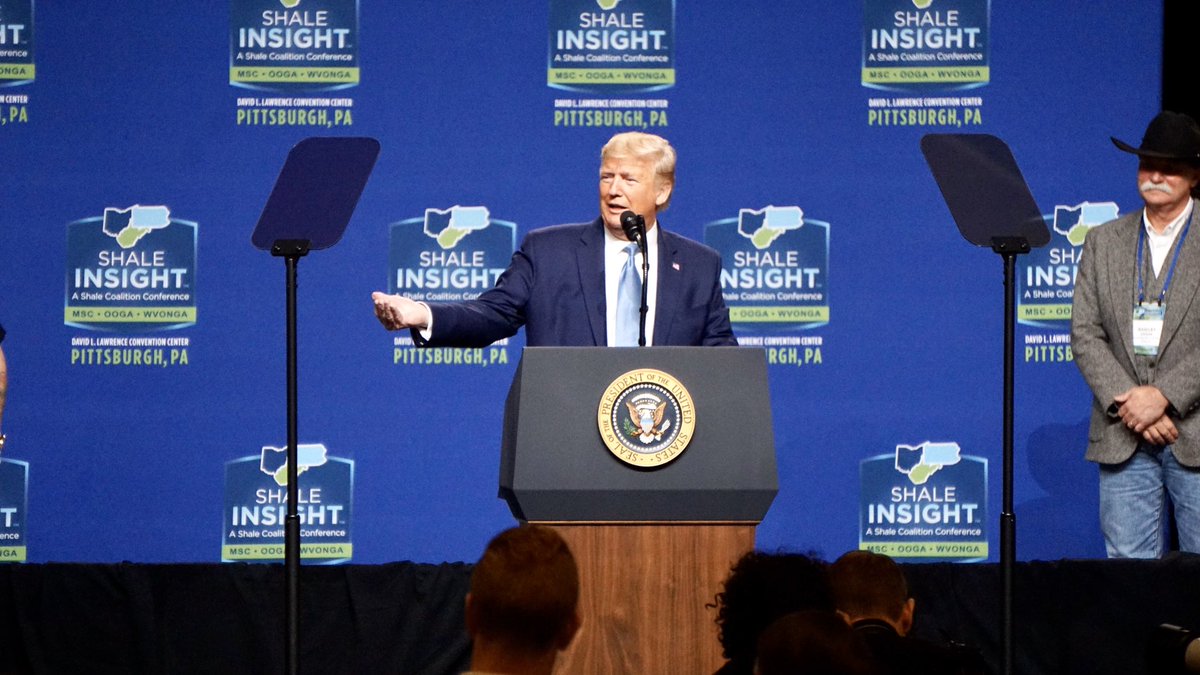 This marks his second visit to the region in the past months, after his Aug. rally at the Shell cracker plant in Beaver County.

The Shale Insights conference was attended largely by those working in natural gas. In his remarks, Trump emphasized his support for the industry, citing the rollback of environmental regulations and withdrawal from the Paris Climate Accords.

The keynote address was open to the public, with a section cordoned off to create space for a rally in the back, and Trump addressed some of the activating issues for his supporters, including re-upping his claim that he is working for “Pittsburgh, not Paris.”

Indigenous activists and anti-fracking groups gathered at Point State Park and held a water ceremony in the Ohio River before marching into downtown for a second Defend the Water rally in protest of the conference. The rally was intended to “address the destructive impacts of the petrochemical industry build-out in the Ohio River Valley and beyond on people and the environment,” according to the website of Breath Project, one of the rally’s co-organizers.

The protests expanded beyond an opposition to fracking, many focusing on Trump himself. 14 protesters, holding a sign that read “Our solidarity will defeat white nationalism,” were arrested for blocking a ramp from the Fort Pitt Bridge near the convention center where the conference was being held.

Mina Karimi, a Carnegie Mellon doctoral student in Civil and Environmental Engineering, “didn’t see any” protests as she presented her research around modeling extraction-related earthquakes at the conference’s research showcase. To Karimi, the conference was an opportunity to talk to people in the industry about projects in natural gas extraction.

Karimi said that her experience of the conference was “not that different” from past events since keynote speakers are mostly presidents and vice presidents of shale and gas companies who also are important decision-makers in the oil and gas industry.

The protests did reach inside the conference. Eight protesters from the progressive Jewish activist group, Bend the Arc, began a chant of “Trump endangers Jews” during the keynote address, and were subsequently removed. The conference was just a couple days shy of the one year anniversary of the Tree of Life shooting, something the protesters referenced in a statement on the organization’s website.

Isabella Mahal, a first-year political science major at the University of Pittsburgh, attended the rally with the intent of causing some sort of disruption. She and her friend, fellow Pitt student Keri-Anne Laing, had been Googling chants on their phone when they heard the Bend the Arc group and decided to join in.

Mahal’s interactions with Trump supporters in the first part of the rally had been mostly apolitical. She likened them to conversations she may have had with neighbors back home in Colorado. Once she joined the protest, however, she said watched some of the same “faces who I had been seeing, they were smiling at us, dancing,” yelling and jeering at them and the other protesters.

“It was definitely [a] moment of real fear about if in fact, I did not know what I had walked into. And I think that that hit me in that moment. The thought that immediately followed that was, this is what people my age, this is what people younger than me live with every day,” when they are unable to pretend, because of their race or gender presentation, that they might fit in at a Trump rally, said Mahal. Since she could pass as a straight, white Republican, Mahal said that this experience reinforced her belief that she has a responsibility to “leverage her privilege” and protest.

“Trump has a polarizing effect,” says Hutner. His main takeaway from the rally was that “everyone needs to calm down.”

At Carnegie Mellon, Hutner says he doesn’t have many political conversations. He thinks that most students at Carnegie Mellon are not very politically involved, which he says is “one of the reasons I like CMU.”